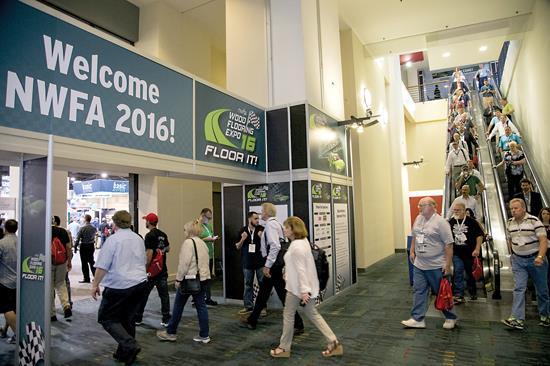 Attendance at this year’s Wood Flooring Expo, held in Charlotte, North Carolina at the end of April, was up 10% from last year’s expo, with 3,131 attendees at the three-day event. Exhibitor numbers were also strong, with 278 companies using 487 10’x10’ booths. That’s up from 264 companies and 470 booths last year.

The theme for the 2016 National Wood Flooring Association event, which took place at the Charlotte Convention Center, adjacent to the Nascar Hall of Fame, tying in with Charlotte’s motor racing heritage, was “Floor It!” It was by most accounts the most successful show in years. Hardwood contractors represented a significantly higher percentage of the attendees this year, drawn as much by the education sessions as they were by the demonstrations on the show floor and the range of products and technologies showcased by the exhibiting companies.

Last year’s growth was driven by engineered hardwood, which will also drive business this year, according to Tommy Maxwell, the NWFA’s new chairman. And solid hardwood volume is up significantly this year, which should help strengthen overall hardwood revenues throughout the year.

Hardwood pricing has been soft over the last year, due to a range of factors, including increased competition from Asia and sluggish housing starts, but at about the same time as the expo, several hardwood producers announced price increases.

Next year’s show, to be held in Phoenix, Arizona, April 11 to 14, is appropriately themed “The Heat Is On.”

SHOW HIGHLIGHTS
Just about all of the major hardwood players were represented at the expo, including the market leader, Armstrong. The firm showcased flagship prefinished collections like American Scrape, Prime Harvest and Performance Plus, the firm’s acrylic impregnated offering, which is suitable for commercial applications, along with its new Timberbrushed engineered hardwood, which is made in Asia.

In addition to showcasing product, Armstrong was on hand to network with local customers and build on existing relationships with hardwood contractors.

Mannington also had a space at the show, overseen by Dan Natkin, senior director of residential products, who said it was the best expo in a number of years, both in terms of its education programs and the activity on the show floor. Mannington displayed recent introductions, with wirebrushed products like Mercado Oak getting the most attention.

At this year’s expo, Natkin led a roundtable on regulations pertinent to hardwood, like CARB rules and the Lacey Act, and how they can impact hardwood flooring businesses.

Another major domestic producer, Mullican, had one of the largest booths at the show, prominently located just inside the show floor entrance. Its presence was further amplified by its substantial team, on hand to greet new and existing customers. Showcased products included the new Oakmont line of low gloss handscraped hardwood, made in the U.S.

American OEM, created in 2013 by Don Finkell, formerly with Shaw and Anderson, also had a large booth to signify its presence and support the show. The sparse, open space showcased stained wood motifs of stars and stripes, which conveyed a key selling point—made in America. The firm makes engineered hardwood from domestic species for private label programs, starting off with rotary cut veneers and this year introducing sliced cut. American OEM opted to showcase new product in a nearby hotel suite.

One of the industry’s leaders in quality, Mirage, came to the show with some dramatic introductions, including a 7-3/4” plank from the Flair collection, with lengths up to 82” in its DuraMatt finish, which has an oiled look. The Quebec firm also offered shorter strips and planks designed to support herringbone installations.

Another prominent Quebec firm, Lauzon, is in the midst of revitalizing its brand and its visibility in the marketplace, returning to the expo for the first time in five or six years. David Mumford, who was named director of U.S. sales last year, has been leading the charge. The firm has a brand new partnership with the NFA and has strengthened its relationship with CCA Global as well.

At the show, Lauzon showcased several products, including a 3/4” two-ply plank, called Expert, with a 5.4mm veneer.

Harris Wood, a Tennessee based producer of engineered flooring, exhibited new hardwoods, like Foothills, a 3/8” wirebrushed product, along with some 1/2” offerings and a patented click system called Pressfit. All of the firm’s hardwood is made in the U.S. Harris also showed unique cork products, like Mendocino, with cork on the top and bottom sandwiching an HDF core, as well as an LVT hybrid, with vinyl on the top and bottom sandwiching a cork core, and a cork wall tile program.

Mercier, another major Quebec hardwood producer, kicked off its 2016 product launch at the NWFA expo, with new planks up to 6-1/2” wide and up to 82” long, along with new stains and a matte finish. Also on display was Pure Expressions, in hickory and white oak, with a UV cured oil finish. Two noteworthy pale stains, Irish Cream and Taj Mahal, are particularly on trend.

PanTim, another regular at the NWFA expo, has been around since 1994, producing mostly engineered hardwood from partner facilities in Indonesia and Thailand that manufacture flooring exclusively for the firm. PanTim comes to the expo to connect to its customer base, comprised of two thirds hardwood distributors and one third flooring distributors.

Like American OEM, Somerset Hardwood Flooring makes all of its products in the U.S., and the only material not sourced from the U.S. is the Baltic birch it uses for the core of its engineered products. On display in its booth were samples of the Hand Crafted collection of maple, hickory and oak in varying widths and long lengths.

Preverco, a Quebec hardwood producer with fashion forward colors and textures, showcased its products in its new display towers. The displays are highly customizable, which has driven demand among its customers.

Arkansas based Maxwell Hardwood Flooring also had a booth at the expo. The firm is led by Tommy Maxwell, who is in fact the new chairman of the NWFA. Using only domestic species, Maxwell makes unfinished hardwood, mostly solid, along with a smaller volume of unfinished engineered wood, which the firm first introduced in 2011.

All of Maxwell’s hardwood comes from its three Arkansas facilities. The firm offers a variety of formats and looks, including custom scraping.

One of the hottest looks in hardwood these days is natural oil and hard wax finishes. While the trend is in its infancy in the U.S. market, the European market is completely dominated by these low gloss finishes. Two of the leading European suppliers of oil and wax finishes, Woca and Osmo, were at this year’s expo.

Osmo, based in Germany, produces oil and wax finishes, which have an advantage over polyurethane finishes because they can be spot repaired. And today’s hard wax finishes are high performance applications. Osmo’s waxes are used not only for indoor hardwood, but also for outdoor decking and screens, as well as cladding systems.

Woca, a Danish firm, produces a range of oil finishes, including a hard wax oil suitable for all types of wood flooring, as well as Neutral Oil, which is used only on oak and is designed to yield a raw wood look. Like Osmo, Woca also has products for outdoor wood. And both firms offer a range of maintenance kits to repair and refresh the finished floors.

The firm is partnering with prefinished hardwood producers. The UV curing, which is virtually instantaneous when the product is hit with light from a UV lamp, allows for multiple coats in seconds. The system can finish wood at a rate of 150 feet per minute.

Välinge, the Swedish innovation firm behind the original click systems for flooring, was at the show with its Woodura and Nadura products made of wood powder. Woodura features a hardwood top veneer with added strength from the wood powder impregnation. Välinge also licenses the TiO2 photocatalytic technology used by firms like Lauzon, which calls it Pure Genius, that actually keeps the flooring surface and surrounding air clear of everything from microbes to particulates.

Bona had a large booth on the show floor, showcasing its wide range of installation and maintenance products, including its DriFast stain in seven new colors. But what turned the most heads were demonstrations of its new dust containment system, Bona Portable DCS 2.0. The unit weighs just over 100 pounds and includes major modifications from previous units. Most notably, the new two-motor system, working with two hospital-grade HEPA filters, hugely increases the amount of captured dust.

As an innovator in analytics tracking and safety programs for truck fleets, Lytx endeavors to save lives on the road through the use of technology. ID Studios was approached by the Lytx facilities manager in 2014 when the building lease camege advancements that save lives. The employees leave their mark on the company culture as it continues to grow in space that supports their dynamic work day.