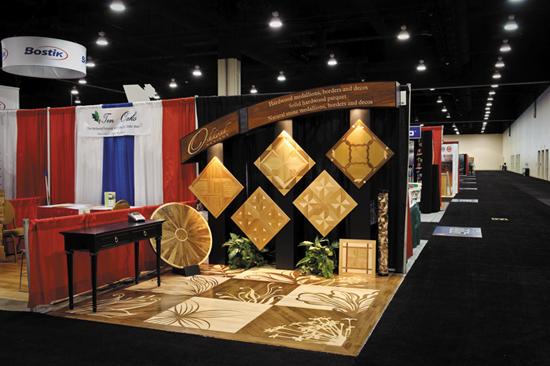 By Kemp Harr and Darius Helm

Despite the beating that the hardwood category has taken during this recession—revenue down 22% in 2009 and down 45% from its peak in 2006—the annual NWFA convention was actually fairly well attended and the overall tone was mostly upbeat and optimistic.

Attendance was up more than 4% from last year, at 2,544 from 2,438, though the show also returned to the East, which historically brings more traffic. This year 237 companies exhibited, compared to 238 last year, so it was about the same, though they only used 414 booths, compared to 434 last year. However, the space this year was arranged more strategically, with education spaces and a large area for free lunches on the show floor, so the overall feeling was much busier and more dynamic.

Most of the attendees who come to the show are either distributors or flooring contractors. Certainly, there were some full service retailers in attendance but by and large this show attracts flooring professionals that focus on the hardwood category.

This year’s meeting and trade show, held in Washington, D.C., marked the 25th anniversary for the event. And during the show, the chairmanship baton was passed from Don Finkell to Neil Poland, president of Mullican Flooring, and it was also announced that Ed Korczak, the executive director of the NWFA, would be stepping down in 2011 after 17 years.

QEP came to Washington to debut its recently purchased hardwood brand—Harris, the Johnson City, Tennessee based hardwood producer formerly known as both Harris Tarkett and Arborcraft. This is Florida based QEP’s first venture into the hardwood flooring category. QEP is best know for its Robert line of flooring installation tools, and at the NWFA expo, half the booth was devoted to Harris and half to the company’s more traditional installation tools, adhesives and underlayments.

On the hardwood side, the company has been busy with a new finish called Finish Loc that offers a lifetime warranty. Featured on the floor of its booth was Craftique Tejas, a tortoise shell textured product with distinctive undulations.

Anderson Floors came to NWFA with many of the new products it introduced at Surfaces, including Natural Brilliance, a new high gloss product that Anderson would not have been comfortable introducing without its new Lustre-Lock Ultra, which it says is six times more scratch resistant than any other finish.

Two other noteworthy products were Haversham and Vintage Crossfire. Haversham is described as “painted,” though it looks more like a tinted stain because the depth of the wood grain still contributes to the overall visual. Vintage Crossfire, on the other hand, has a hand-sculpted, distressed finish that has been extremely popular with consumers since it was first introduced.

W.F. Taylor showcased its new MST-Plus Advance adhesive that, when installed using a special trowel, creates a moisture barrier between the hardwood and the subfloor. W.F. Taylor, which has manufacturing facilities in Dalton and Los Angeles, is known for the innovative new products it has developed, and MST-Plus Advance is another weapon in its arsenal.

One of the most dramatic products at the show was Lauzon’s Line Art, a 7/16” engineered maple or 3/4” solid maple with layered stains that create a riveting linear design. While the striations are essentially manufactured, the character of the maple, including the characteristic pearlescent burling, remains visible. Line Art comes in two greys and two browns, and it should do well among fashion conscious customers, urban clientele and even the commercial market.

Somerset updated its displays with a tower on each side to show nine collections instead of seven. New is the Character Collection of low gloss hardwood in walnut, cherry, white oak, hickory and maple. The Antique Collection features a timeworn surface with soft scraping, while the Country Collection is more heavily handscraped, with rougher chatter marks. The firm has also come out with the High Gloss Collection of solid oak in a range of colors, and the Exotic Collection with kempas, tigerwood, acacia, acajou and merpauh in solid constructions with rustic look and a semi-gloss finish.

Quebec based Mercier introduced its new Exotic series focusing on the look, rather than the species, in deep colors and a semi-gloss finish. The firm also showcased Mercier Loc in maple and red oak, using Välinge’s G2 click system—it comes in a natural finish and four colors, and is competitively priced. However, what stood out most at the booth was probably the firm’s Color Spectrum display, designed by Art Guild. The single tower display, which launches this month, comes in either red oak or maple and includes scores of small color rectangles—both simple and compelling.

The highlight at Mannington’s booth was Earthly Elements, the new engineered wood tile program that’s installed with pre-inserted tabs at the four corners for a seamless tongue and groove installation that enables a range of floor designs. The line comes in eight colors and can go down in four patterns. Coming soon is a plank system that will work with the squares.

WE Cork, which manufactures in Portugal, came to the show with a full range of products. Few people realize exactly how tough and durable cork really is, but the cork handbags on display, with the feel of leather, gave some indication. The firm showcased flooring made from both solid cork slices and agglomerated cork that is first pressed into blocks, then cut.

PanTim added two colors to its trendy Fineline collection from its Great Northern Hardwood brand of engineered product sourced from Thailand—what’s great about this brand is that the core is from rubber trees that after 25 years no longer produce rubber, both reducing waste and adding value and local revenue.

Smith & Fong, the stylish bamboo producer, was also at the show, exhibiting, among other things, its first hardwood line, the ingenious Sideways collection of engineered domestic species with the grain running perpendicular rather than along the length.

Mohawk showcased its next generation of Scotchgard branded finishes, called ArmorMax, for both the Columbia and Mohawk brands. The finish features the Scotchgard repellency with additional aluminum oxide without reducing the clarity of the grain. Also new are some engineered handscraped products, including 5” wide hickory that is formaldehyde free—it’s called Pagosa under the Columbia brand.

Mullican’s engineered Castillian featured timeworn, fumed and wirebrushed looks for a total of 12 colors, all in ultra low gloss finishes. Species include oak, hickory and walnut, and colors are both traditional and fashion forward.

Oshkosh Designs, best known for its classic symmetrical medallions and borders, illustrated its design capabilities on its booth floor with stunning plant silhouettes in maple and walnut, which should have great appeal to fashion forward designers, including the A&D community.

Johnson Premium Hardwood showcased its ForeverTuff engineered line of 43/4” planks in red and white oak, maple, hickory and walnut, all in natural colors with a semi-gloss finish. Also on display was the Lexington handscraped series of 6” plank in oak, available in four colors including a whitewash.