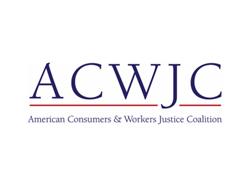 Norwalk, CT, August 7, 2018--The American Consumers & Workers Justice Coalition (ACWJC) has been adding members who oppose the proposed tariffs on vinyl flooring imports from China. The group believes the tariffs will have a negative impact on U.S. consumers and many domestic flooring businesses, especially those benefitting from the explosive growth of LVT and multilayer flooring.

"On June 18, the President directed me to identify $200 billion worth of Chinese goods for additional tariffs at a rate of 10 percent, in response to China's decision to cause further harm to U.S. workers, farmers and businesses by imposing retaliatory duties on U.S. goods. I initiated this process on July 10.

"This week, the President has directed that I consider increasing the proposed level of the additional duty from 10 percent to 25 percent. The 25 percent duty would be applied to the proposed list of products previously announced on July 10."

Already with 34 members and growing daily, the coalition is standing up for the small businesses and consumers who would be effected by the proposed tariffs:

Said Harlan Stone, one of the founders of ACWJC and president of the Multilayer Flooring Association: “The dynamics of this situation are creating a greater need to respond. Not only is it a question of ‘if’ and ‘when’, but now it is also a question of ‘how much’.

“A 25% tariff would be felt in every corner of the flooring industry; from the regional distributor to independent retail outlets,” Stone continued. “It will negatively impact the installer, home improvement contractors and even truck drivers and warehouse workers. We can’t stand idly by while the American consumer and worker is asked to bear the brunt of this unfair taxation.”

The coalition’s submission to testify before the Office of the United States Trade Representative (USTR) was approved, and Stone will testify on behalf of ACWJC later this month in Washington, D.C.

Shaw, Novalis, CFL, Metroflor and the American Chemistry Council are supporting the effort.

The first round of U.S. santioned Chinese tariffs totaled $34 billion with the second totaling $16 billion.