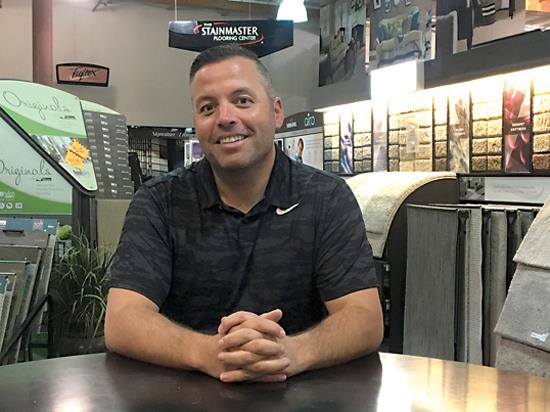 That cordiality is, in essence, the driving principle behind Sterling Carpet & Flooring’s approach. You might call it the business version of the Golden Rule: don’t treat the customer as a walking bill of sale but as an individual that desires sincerity. Today, Rich’s son Dan is owner and president of Sterling, and Dan’s goal is largely to maintain the standard of goodwill that his father and John modeled. After all, in a market dominated by mega-stores, relationships matter more than ever, and a genuine smile and helpful attitude may not only secure a sale but also a lifelong customer.

A DOOR OPENS
Rich and John were college roommates. In 1987, around age 40, both had careers outside the flooring industry-Rich had recently sold a catalog showroom that he owned with his father, and John was in banking-when they heard that a community flooring store was up for sale. Even though neither of them had any connection to the flooring business, the two knew that Sterling had a strong and enduring reputation in the community and had heard good things about the founding owners, the Sterling family. They went out on a limb and purchased the business, and found success for the next several decades.

Dan-who today is about the age his father and John were when they bought Sterling-grew up in the business, working in the store when school let out for the summer, doing whatever needed to be done, from sweeping the floors to driving the forklift. Dan left California to attended DePauw University in Indiana to study writing but determined in his college years that business might be a better career path. For spring break his senior year, Dan went to Florida, where his parents happened to be attending the Shaw convention. Dan hung out with the Shaw team during his vacation and found them to be likeable people, so when he graduated from DePauw, he accepted a territory manager position with the company, later transferring to its builder division selling Tuftex. He stayed with Shaw for seven years, until 2007.

“When the big crash started, I saw the writing on the wall and decided it was a good time to make a transition. So I interviewed with my dad’s partner John, who is like an uncle to me. He took me out for dinner and a beer and tried to talk me out of getting into the retail flooring business,” Dan recalls with a laugh. Dan persisted and purchased Sterling from his father and John in early 2015.

“Dad and John still work here today,” says Dan. “We have a very unique partnership. Technically, I’m president and owner, but, within our organization, there are no titles or egos. We work very closely together. Dad and John are a great asset for me, and they have been open to letting me try new things and giving their input on my ideas.”

The collaborative approach that the trio shares extends to its employees. Everyone within the organization has a do-what-needs-to-be-done attitude. Explains Dan, “We have a tenured sales team with lots of experience, and we value our employees a lot. They get paid well, and it’s like a family here-sometimes a dysfunctional family, but no one person is more important than another. We all sweep the warehouse and answer the phones. We all work together.”

HELP ON YELP
Sterling has never done much in the way of traditional advertising, relying instead on word-of-mouth promotion and networking with real estate agents and contractors. Since Dan took charge, he has been focusing on working review sites like Yelp to help generate business. “We do advertising there, respond to queries, follow leads,” explains Dan. “We find it’s an interesting avenue because Yelp is highly revered by many shoppers. For a while, I fought it, but I learned that you can use it in your favor. We have gotten about 30 to 40 new reviews this year. When people call in after a sale and tell us that they had a great experience, we politely ask them to go online and share their experience. We send a thank-you letter after every job, and we always say ‘If you’ve had a five-star experience, please tell your friends.’” Dan does not feel comfortable offering financial incentives for reviews, as some retailers do.

One of the reasons Dan focuses on online media is because he sees reaching the younger demographic-including first-time homebuyers-as one of his greatest challenges. Jay Flynn, vice president of Creating Your Space, was Dan’s boss at Tuftex, and Dan reports that he has been invaluable in helping him understand and navigate the online side of the business.

STANDING ON ITS STRENGTHS


Sterling is situated in a unique location and takes a unique approach to its showroom offering as well. The business is part of what is called the Tile Mile, a mecca of all things home improvement. Dan estimates that within four square miles of his business, 250 floorcovering retailers exist, many of which specialize in tile and stone (thus the moniker Tile Mile). With such intense competition in the flooring and home improvement business, Sterling has held to a stick-with-what-works approach. For that reason, the leadership hasn’t looked much at product differentiation beyond flooring and also does not carry tile or stone.

Interestingly, when Rich and John bought Sterling in 1987, the business was basically a large warehouse of off-goods, seconds and bulk products. In the early ’90s, Rich and John transitioned to a cut-order model. At this time, the team converted a portion of its space into a showroom, but, explains Dan, “We still stock a lot of material and have a large warehouse.”

Today, the showroom is nice but maintains a no-frills atmosphere. “I like to compare us to Costco,” says Dan. “We have the persona of being a good-value retailer. Our showroom looks like a place where you’d get a good deal, but our average net selling price is higher than many people would expect. We sell a good amount of Masland, Fabrica and Stanton. We do a decent amount of work in some pretty affluent areas, so customers are looking for better goods.”

For many years, the business was soft surface only but it added hard surface some years back and has seen the category grow annually. “The delta between carpet and hard surface shrinks every year,” says Dan. “For years, we were 80% soft surface, 20% hard surface. Last year, it was closer to 60/40. This year, there have been months where we’ve been 50/50. WPC has been a significant growth category. Today, we’re almost doing as much WPC as we are hardwood. The WPC category is where I’m seeing the most opportunity because of the breadth of products, the visuals. We do many jobs by the water, and beach homeowners see the benefits of it.”

In total, about 85% of Sterling’s business is in residential remodel. “We are a true retail store,” says Dan, “but sometimes commercial work falls in our lap.” This is typically not specified commercial work but tenant improvement and mainstreet jobs.

JOINING THE NFA
Around the time that Dan purchased the business, Sterling was asked to join the National Floorcovering Alliance (NFA). The NFA is a tight-knit group of successful floorcovering retailers with specific rules for membership. Retailers in the group must have sales of over $10 million annually, and only one retailer per market is allowed.

When the former NFA member for Anaheim left the group, the NFA approached Sterling and asked if they’d be interested in joining, then the group sent representatives to visit the store. Next, the Sterling team went to an NFA meeting as a prospective member, and, ultimately, both sides determined that the match was a good one.

“It’s the best thing we’ve ever done for the business,” says Dan. “We learn everything we can from the larger and more established members, and we try to contribute. I can’t think of one reason why we would not want to be a part of the NFA, and I wish we’d done it sooner.”