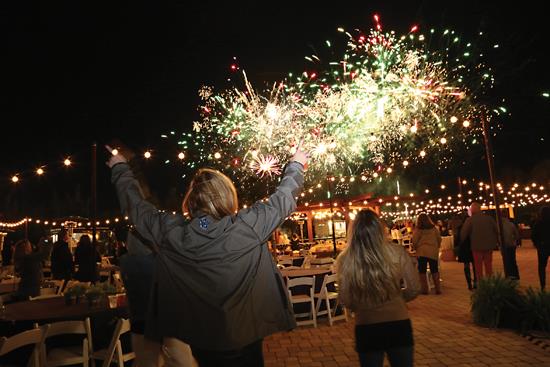 Shaw Industries’ biennial aligned dealer convention, held the third week of January in Orlando, was a bit of a departure from Shaw’s previous meetings with its most loyal retail customers. Yes, it was still family focused, and, yes, it was a big event with over 3,600 attendees-but this year it was clear that Shaw is listening and letting the dealer drive the agenda. In total, the 1,600 members of Shaw’s Flooring Network (SFN) do $800 million on an annual basis, and the goal is to take that number to $1 billion in the next four years.

This year’s “Commit” theme was well matched with the rollout of the program’s four-way commitment, which has Shaw committing to its retail SFN members and vice versa, the members committing to each other, and everyone pledging a commitment to providing exceptional service to the consumer. The concept of “servant leadership” and building a relationship with dealer partners that extends beyond business to engage the whole family on a personal level was expressed from nearly everyone who took the stage during the event.

Danny Crutchfield, who was named VP of the Shaw Flooring Network last year, noted in his inaugural opening talk in front of the group that the convention has always been about people’s families, adding, “We recognize that family is a big part of what people do. It’s not about making your business better; it’s about making your life better. If we can connect with people on a deeper level, from a partnership standpoint and improve the things in their life that really are important, we truly believe that partnership takes us to a deeper place.”

COMMIT 2019
Celebrating its 20th anniversary, the SFN convention reinforced its family interest by offering an event focused on retailers’ families. Universal Studio’s characters such as Beetlejuice, the Men in Black and Star Wars Stormtroopers, as well as a fireworks show and an evening at the Universal Studios theme park entertained children of all ages, providing a light-hearted, fun atmosphere. The focus on attendee inclusion was further reinforced through the placement and design of the general session stage.

A round platform was situated in the middle of the audience, creating a more intimate setting. Attendees felt like they were part of the event and not simply onlookers being “talked at” as Shaw shared its goals moving into 2019.

According to Crutchfield, the research Shaw recently completed revealed a great deal about how to reach consumers and how to help SFN dealers do the same. “We think, between our members and Shaw, that we can truly deliver an outstanding experience that will make the consumer want to keep buying from a Shaw Flooring Network store,” says Crutchfield.

SFN DEALER RESEARCH
For the last several years, Shaw has upped its game by investing heavily in market-based research-with efforts aimed at both the consumer and the dealer. Last year, Shaw hired a third-party research firm to spend five months studying its dealer base. What it learned was surprising.

The research revealed that a significant number of members focus on the builder segment in addition to retail, but also a healthy amount of B2B commercial as opposed to B2C. SFN attempted to compile a member profile but, due to the broad diversity of its population, was unable to do so. The research indicated that flooring retail management/ownership is now in its second and third generations. As for member issues, 70% of all members reported concerns about the labor shortage in installers and more than half are concerned about finding and keeping RSAs.

SFN was surprised to learn that its members annually spend on average $25,000 on digital advertising and $70,000 on marketing, and also indicated that they would like to gain more confidence in their marketing strategy and tools as well as a greater web presence.

Additionally, members reported that they want to feel a greater level of support from the manufacturer and SFN and an overall better sense of connectedness to fellow aligned retailers. The research also reinforced the notion that the dealer can drive the consumer to buy whichever brand the dealer favors and much of that favoritism is influenced by the mill rep that calls on them on a daily basis.

INKY JOHNSON INSPIRES
Much of the SFN meeting was devoted to Shaw interacting with their dealers on product and training, but in one session, Shaw brought in a motivational speaker named Inky. Inquoris “Inky” Johnson was a University of Tennessee (UT) football player who was injured during a routine football game in Neyland Stadium in 2006. The injury caused him to be permanently paralyzed in his right arm and prevented him from moving on to a lucrative NFL career. But his injury did not prevent him from moving forward in life. He graduated from UT with a master’s degree in sports psychology. Growing up in poverty, Inky uses his tragedy and his education to inspire others. His inspirational talk encouraged attendees to continue moving forward and to push through their challenges, just as he did.

A NEW SFN
This information is already being used to enhance SFN. Exclusive product programs, a digital platform focused on lead conversion, new merchandising systems and various other member benefits are being launched in 2019 to help members be more successful.

Tim Baucom, executive vice president of residential, said, “Today, brands are more than just product. The consumer is an activist in their purchasing habits, and through their pocketbook, they vote for who they believe in.”

With this in mind, SFN members will have exclusive product programs that focus on Shaw’s four core brands-Shaw, Anderson-Tuftex, Coretec and Philadelphia Commercial-to assist aligned dealers with reaching consumers. To demonstrate how important it is to consider how all four brands work together, Baucom used an automotive comparison. Comparing Shaw Floors to Ford, Baucom said, “In some cases, the individual collections or models get more heat than that overall brand, but we want it to be something people feel good about.” Comparing Anderson-Tuftex to Lincoln, he noted, “It’s a more discriminating customer with a more focused distribution.” And he presented Coretec as Tesla, where one brand stands above a sea of sameness when it comes to electric cars. Shaw is “trying to drive broad understanding and acceptance” in order to become the standard when it comes to innovation in the flooring tech world with its Coretec brand. Philadelphia Commercial, Shaw’s mainstreet division, is the workhorse with a comparison to GMC trucks.

Shaw’s top end growth for 2018 was in the upper single-digits in its carpet and LVT categories. While growth in LVT is not surprising, the growth in soft surface was due to the level of innovation the company brought to market combined with a differentiation in products in the retail replacement and builder segments, and in commercial with the new StrataWorx tile. Also driving growth was the blue LifeGuard backing on Bellera products and the rebranding of Anderson-Tuftex.

SFN is launching its new digital lead conversion program, Velocity. This program is designed to drive more consumers into stores. Members will have access to a custom website, social content and local digital advertising. The Velocity program is divided into four packages that are designed to meet retailers where they are and elevate them to the next level.

Three new merchandising systems are available. Shaw’s original Colorwall has been redesigned to offer 148 soft surface colors in a simple, white design. The Floorté Hardwood flex display, also in white, holds 30 wood samples, and Coretec’s Colorwall is an SFN-exclusive display in a grey format with a product breakdown for consumers to view.

DEALER FEEDBACK
Following the event, several retailers weighed in on how they felt about the new program and the plans they had to implement changes in their store based on what Shaw presented. Speers Road Broadloom in Ontario, Canada has been an active member for years and understands the importance of a commitment. Carl French, owner, said, “We are longtime Shaw Floors retailers. Shaw has the greatest group of retailers. [We], our customers and Shaw are all winners when we commit to keeping our family together for today and the future.”

As active members for more than 15 years, the Carpet Mart in Louisville, Kentucky appreciated the contact information exchanged at the convention, the best business practices shared by others and the connections made with partners like Creating Your Space, Qfloors, Promoboxx and Wells Fargo. Bruce Jones, manager, said, “We have made several changes since returning from the Shaw convention. First, we updated displays in both the new Colorwall soft surface and hard surface racks; they are more unified in color and size, which should minimize the cluttered look racks create. Second, we have re-arranged our store by eliminating little used racks and creating more inspirational settings with gathering tables and areas that will provide a more comfortable ‘at home’ feel.”

Fleury’s Floor Covering in Concord, California joined SFN two years ago. Kimberly Fleury, vice president, said, “As a small, family-owned business, we felt it was crucial to align ourselves with a company like Shaw. Our goal is to take advantage of everything Shaw has to offer.”

Fleury added, “The products are fabulous-the new Coretec, the updated Anderson-Tuftex line, new waterproof hardwoods, but, for me, it was the people. I felt a new sense of commitment, a cohesive team, a greater interest in the success of the retailers. The retailers and Shaw are really working together to make it a win-win for everyone. I came away from the convention feeling stronger, more empowered, proud of the company we are aligned with. I like what I heard and how I felt at this convention. We are excited to continue to update our store and our brands while continuing to grow.”