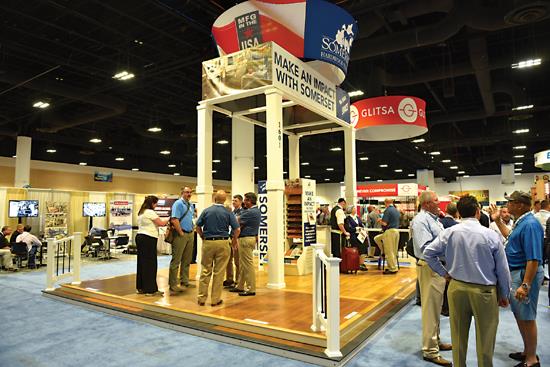 The 2018 National Wood Flooring Association Expo, held in Tampa, Florida this April at the Tampa Convention Center, attracted 408 first-time attendees and 49 first-time exhibitors. Attendance totaled over 3,000-compared to last year’s event in Phoenix, Arizona that had approximately 2,400-which is to be expected in the southern part of the country, closer to the core of the business. Most of the forests, sawmills and businesses are located in the southeastern U.S.

The theme for this year’s expo, “Deep Dive,” not only reflects the Tampa Bay venue, but also represents the depth of encouragement and support demonstrated by the NWFA for its members. The keynote speakers for the opening session were the founders of Cousins Maine Lobster, Jim Tselikis and Sabin Lomac, who obtained funding to start their franchise food truck business by making a deal with Barbara Corcoran on ABC’s “Shark Tank.”

The cousins offered tips on success, including having a sense of humility, never letting go of your story and being fearless. When Tselikis and Lomac initially considered what type of business to pursue, they asked themselves, “What do we know?” They ultimately felt that their memories of growing up in Maine-the moments shared with family, which included eating lobster in the backyard at family gatherings-was a strong brand story that could help launch and sustain a successful business.

Keeping with the entrepreneurial spirit, the NWFA hosted its own version of Shark Tank, called Plank Tank. Three contestants presented inventions to the cousins, NWFA chairman Chris Zizza and the audience. An app that expedites the in-home measuring and quoting process, a nail depth setter and a pneumatic floor-laying clamp were introduced. Contestants competed for the chance to win a package of NWFA marketing and education products and services worth over $15,000. On the last day of the show, the app, called QuoteHero, won the prize.

As for NWFA business, the organization is working diligently to define what qualifies as real hardwood, now that a few laminate suppliers are starting to market their products as wood flooring. The association also hopes to build more awareness of the benefits of hardwood flooring to the consumer. Bruce Zwicker, retired CEO of Haines, has been hired to lead several initiatives through various committees.

SHOW HIGHLIGHTS
American OEM, now in its fifth year, focused on launching its Hearthwood brand and building its distributor base during the expo. The firm recently added Compass Flooring as a distributor, covering Florida and Texas, and it is still seeking a distribution partner in the Pacific Northwest. The retail pricing range for Hearthwood branded hardwood flooring is $3.99 to $5.99 per square foot. In 2017, American OEM’S sales were up over 20%, according to Don Finkell, founder and CEO.

American OEM recently named Harry Bogner as its new head of operations. Bogner previously worked for Mohawk’s wood business and, prior to that, GE Plastics.

Mullican, located in Johnson City, Tennessee, revealed its new logo and brand story. The logo depicts Mullican’s birthplace, the Appalachian Mountains, and a tree-its most valued natural resource. The brand story takes consumers back to Mullican’s origins in Ronceverte, West Virginia and tells of its reputation for high-quality products steeped in tradition and heritage.

In addition to revamping its brand, Mullican continues to focus on building its manufacturing base here in the U.S. Over the last six to seven years, domestic production has grown to account for well over 90% of sales.

Quebec-based Mirage introduced six more SKUs to its best-selling line, the Sweet Memories Collection. Meant to evoke good memories with names like Bubble Bath, Hula Hoop, Sand Castle and Roller Coaster, the collection has been running strong for approximately six years. The new intros, featuring Mirage’s DuraMatt finish, are all white oak, with both colors and character on the lighter side.

The firm has plans to add more visual room scene examples to its website.

Lauzon focused on changes to its merchandising approach, by color-coding its labels on all three collections for quick identification in the display. On the back of each product board, consumers will find a room scene to help them visualize the product in a space, as well as help them pick the right product based on its features.

Jumping on the computer app train, Lauzon has created an app that will allow consumers to scan any label-up to 25 years back-in order to view the product sheet. The scanning process works much like scanning a QR code.

For the future, the firm is looking into the use of artificial intelligence and virtual reality to get the word out quicker on its newest introductions and technology.

Somerset introduced its new Classic Character collection that combines the best qualities from its Classic and Character collections. The new line is available in four colors: Natural White Oak, Gunstock, Wheat and Dark Forest. It is available in both engineered and traditional hardwood. The firm also debuted a new trade show display that clearly communicates its Made in the USA heritage.

Mercier, located in Quebec, launched a new product display that is capable of showcasing all five of its collections: Origins, Design+, Exotic, Nature and Elegancia. Aptly named the Collections Display, it holds more products and is more efficient at communicating information related to each collection.

Eagle Creek by Home Legend, a division of Power Dekor, is making major changes-including website enhancements-in order to sustain its declared 47% growth in the last two and a half years. With a new marketing director on board, the company is poised for a strong marketing presence in 2019.

Kährs, new to the NWFA Expo, showcased its Prime Collection with five SKUs and added new colors to its best-selling Canvas Collection. The firm reported that its Canvas Collection was launched five years ago and is most popular in the multifamily sector for its sound attenuation.

Founded in 2007 and based in San Diego, California, Du-Château offered up a good, better, best display of products at this year’s show, starting with its American Guild designer warehouse line of wider, longer boards. Its OEM brand, also ascribing to wider and longer, comes in eight SKUs that contain no stain or urethane but rather its signature hard wax. Finally, the Atelier series is handmade, taking anywhere from six to eight weeks to produce. The boards are 8’ long and come in 8” or 91/2” widths. Atelier is available in 20 SKUs.

Sweden-based Välinge introduced a more cost-effective alternative to its original 5G fold down installation system, called the Integrated 5G push down installation system or 5Gi. The original system uses a flexible plastic tongue to lock the system in place as pressure is applied. The new Integrated system makes use of a fixed or integrated tongue to lock the laminate or LVT/WPC products.

In addition to its new click-lock technology, the company is building a 200,000-square-foot state-of-the-art facility in Sweden that will launch in the second half of 2018. The new facility will produce Woodura and Nadura flooring.

Tramex introduced its new Data Logger that has the ability to measure relative humidity inside wood flooring. Measurements can be taken in intervals and saved within the app, enabling the data to be shared across multiple devices simultaneously within a 150-yard radius. Once the data has been collected within the app, it can then be used to create charts that reflect the various measurements taken over a specific period of time. The ability to connect via Wi-Fi to devices in multiple locations across a city or region is currently being developed for what Tramex is deeming phase II for the Data Logger.