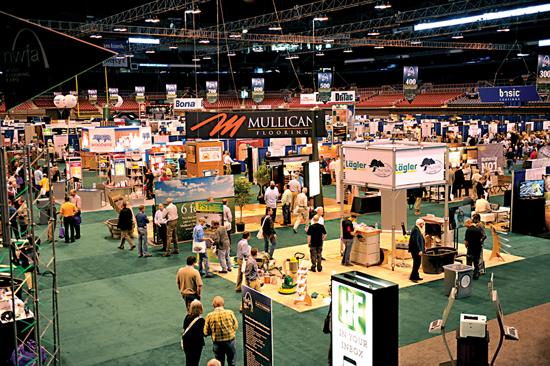 This year, the National Wood Flooring Association brought its Wood Flooring Expo to St. Louis, Missouri, where the NWFA was founded 30 years ago and where it is currently headquartered. The expo was held April 28 to May 1 at the Edward Jones Dome, home field for the Rams since 1995, and exhibit space was sold out by February.

The show grew 15% in exhibitor space this year, and there were 264 exhibitors all together, including 60 that were new to the show. And virtually all the major hardwood producers were on hand. Attendance of 2,858 was down 4% from last year, when it was held in Nashville, but up 24% from 2013. Next year’s expo takes place in Charlotte, North Carolina, April 27 to 30, and that should be another big one.

This year’s theme was “Play It Forward,” emphasizing how members can grow their businesses through community involvement and service to others. Central to the theme was “cause marketing,” which most commonly refers to when a business partners with a non-profit to advance the mission of the non-profit and at the same time elevate the profile of the business.

It’s seen as a mutually beneficial system, and one that is increasingly relevant to today’s new consumers, like Millennials, according to Michael Martin, president and CEO of the NWFA. Martin introduced the theme during the Kickoff General Session, followed by the official launch of the partnership between the NWFA and the Gary Sinise Foundation, which helps wounded veterans.

The keynote speaker was Bill Courtney, owner of Memphis based Classic Hardwoods and the subject of “Undefeated,” an Oscar winning documentary on Courtney’s role as coach of a high school football team. Courtney captivated the crowd with his story, as he discussed his own journey of “playing it forward” and encouraged attendees to find ways to build relationships with their communities. And Ozzie Smith, Hall of Famer and dynamic Cardinals shortstop from 1982 to 1996, was on hand to announce the NWFA’s partnership with the Gateway PGA Reach Foundation.

Education was a key initiative this year. The education sessions were well attended and covered timely topics, and most offered CEU credits. The NWFA offered more than 20 hours of teaching and instruction, broken into six categories: management, design, technical skills, marketing and sales, and legislative. In addition, the NWFA Certified Professionals (NWFACP) Symposium, held the day before the show, offered more instruction and included the opportunity for hardwood flooring salespeople to become NWFACP Certified Sales Advisors.

Unlike the Surfaces and Coverings shows, the NWFA Expo is not as focused on new product introductions. The exhibitors all have product in their booths, but their main mission is to reinforce their existing relationships with distributors, contractors and some of the big retailers that come to the event. New relationships are also forged at the show. And it also reinforces the sense of community in the hardwood flooring industry and gives everyone a chance to see first-hand where the industry is headed.

Houzz, the online platform for home improvement and interior design, also showed at the Expo. And there were specialty firms, like Oshkosh Designs, along with well established firms with overseas production or established partnerships, like PanTim, Pinnacle and Ark Floors.

Mirage showed new product, including the Flair collection, which features two character grade lines with everything from mineral streaks and cracks to closed and open knots and milling marks. The line comes in maple and white oak, with a low gloss finish that creates the look of oiled hardwood.

Hasko, the equipment manufacturer best known for its side matching manufacturing equipment, was also at the show, along with other equipment suppliers. Hasko showcased its 2500 Process Solid Wood Flooring system, which scans wood and chops out defects to optimize yield.