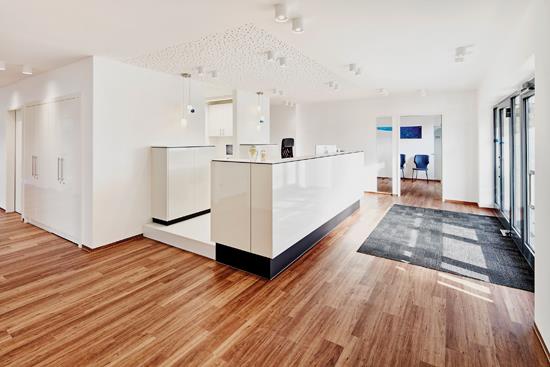 Polyvinyl chloride is unique among polymers. It has peerless performance attributes, including its light weight, resilience, chemical stability and resistance to degradation, as well as low cost of production. And unlike other polymers, 57% of its content is derived from sodium chloride, table salt, in the form of chlorine.

It’s that last bit that makes PVC controversial. Though that 57% of its content comes from a hugely abundant resource-sodium chloride is generally derived from sea water-it’s used to make a chlorinated material, which is a chemical of concern. A range of environmentalists oppose it, and some end users, like Kaiser Permanente and Google, won’t specify it.

So there’s demand in the market for alternatives, though it’s not clear how much. But there’s enough that at this year’s NeoCon show in Chicago, several large firms unveiled new PVC-free alternatives to LVT: Shaw Contract and Patcraft, Mohawk Group, Mannington and Cleo (Congoleum).

Also at the show, Shannon introduced Naturescapes, a Metroflor PVC-free sheet, and Upofloor introduced a tile version of its Zero PVC-free sheet. Novalis came out with two collections of PVC-free heterogeneous sheet goods. And it’s worth mentioning that Armstrong has had a successful PVC-free alternative to VCT for several years. Additionally, laminate maker Inhaus has a product called Sono that’s essentially a solid board of a polypropylene and ceramic powder composite. And American Biltrite has a polyolefin product called AB Pure, though it tends to compete with rubber.

A CLOSER LOOK
Shaw Contract previewed the Palette collection from its new PET Resilient program, and Patraft showcased Woodtone, with the same construction. The products, which are fully recyclable, will formally launch early next year, with all manufacturing taking place domestically.

It can be argued that the PVC-free product with the most sustainability potential is Shaw’s PET tile, though not necessarily because it features 40% post-consumer recycled content from drink bottles. It has the opportunity to be far greener. When it comes to recycled PET drink bottles, demand exceeds supply, so whatever one entity doesn’t use as recycled content, someone else will. Within the flooring industry, Shaw itself uses a lot in its residential PET carpet, and Mohawk uses even more.

However, it’s the opposite story for recycled PET carpet, whose end-use markets are currently so weak that the massive volume of PET carpet hitting the waste stream is threatening to entirely decimate the U.S. carpet recycling infrastructure and bankrupt scores of entrepreneurs doing the collecting, processing and recycling.

Should Shaw’s PET resilient products prove to be robust and durable-and considering Shaw’s brief experiment with EcoWorx Resilient tile a few years ago, it’s a safe bet that the firm has done some rigorous testing on PET tile-and should there be strong demand in the market (likely led by healthcare), then the firm will soon find itself producing sizeable volumes of the product. If the firm can channel recycled PET carpet fiber into the product, it could play a big role in stabilizing the carpet recycling business.

Over the years, Shaw has proved to be a key player in sustaining carpet recycling. Not only did its first Evergreen Nylon Recycling facility-which reduced recycled nylon 6 into caprolactam to turn into new fiber-play a central role in the development of the recycling network, but the firm even purchased and stockpiled nylon 6,6 recycled carpet when end-use markets faltered. And if its PET tile takes off, the firm is poised to reprise the same role. Preliminary research seems to indicate that Shaw may be able to use recycled PET carpet in its product, though it’s still too early to say for sure.

Pivot Point is made in South Korea. And while some PVC-free products have to use specialized adhesives, this product can be installed using traditional LVT adhesives.

Mannington, an LVT leader for several years due in large part to its Amtico acquisition, introduced Cirro, which the firm anticipates will carry a Red List Free Declare label. The product was developed by Mannington’s operations in Coventry, England, and it was introduced to the European market in mid 2017. Cirro, which also works with LVT adhesives, has costlier ingredients than LVT and is priced higher.

Cirro replaces PVC with an acrylic polymeric construction, and a print film allows it to offer the same designs and textures as its LVT offering. The firm anticipates traction in the healthcare, corporate and even higher education markets. The 2.5mm tile was introduced at NeoCon in 20 designs.

Then there’s Cleo, Congoleum’s PVC-free hard surface brand, first introduced to the market at Surfaces 2018. At NeoCon, Cleo previewed its commercial program. The firm started looking at PVC bases about a decade ago, and it has been focusing on product for the last couple of years. First it looked at digital printing directly on the core to do away with the PVC cap, then it replaced the PVC core with a composite material made of 85% limestone (calcium carbonate) and 15% EVA. The limestone is sourced locally-Congoleum is in New Jersey and the limestone comes from Connecticut-and the product is made at the firm’s New Jersey facility.

Cleo products can be recycled and, according to the firm, can be turned into new product. And a program is being set up to take back the product after its useful life. The tiles have an AC-3 rating for the residential offering, and an AC-5 rating is anticipated for the commercial products.

EVA is ethylene vinyl acetate, and it’s a remeltable thermoplastic, like PET and polyolefins. But the vinyl has no relation to PVC and does not contain any chlorine. The product works with traditional LVT adhesives.

At Surfaces 2017, Inhaus, a laminate producer, came out with Sono, a product that really has no relation to laminates at all. It’s a homogeneous rigid product made of a solid composite board of 50% polypropylene and 50% ceramic powders. It doesn’t fall into any category definitions, but it’s perhaps best described as a homogeneous SPC. It’s acrylic coated on the back, and on the face is an electron bonded white primer that serves as the base for digital printing. And it’s protected with four coats of UV acrylic lacquer. The tile is fully recyclable.

For now, Sono is a residential product, but the firm is certainly looking at the potential for commercial applications. Its digitally printed visuals position it well for customization.

At NeoCon, Shannon Specialty Floors unveiled Naturescapes HPD, which is a PVC-free heterogeneous sheet product, as part of its Teknoflor offering. And it features a Living Product Challenge Petal certification and an LBC-Compliant Declare label.

Naturscapes’ composition is particularly interesting. Developed by Metroflor and manufactured by Germany’s Windmöller GmbH, Naturescapes is a polyurethane composite made of 50% limestone, 25% virgin materials and 25% castor oil.

Shannon also offers Bare Naked, a line that includes both homogeneous sheet and heterogeneous plank and tile, manufactured by Upofloor.

Upofloor, which is part of the Kährs Group, is a Finnish producer founded in the 1950s that made its first PVC-free resilient about 12 years ago, a plank and tile product made of limestone and polyolefin with a PVC-free print film, called Xpression. And it quickly followed up with a PVC-free homogeneous sheet called Zero. At this year’s NeoCon, the firm introduced Zero tile. Zero is also made of a polyolefin.

While Xpression is priced above LVT, Zero sheet goods are competitively priced with sheet vinyl. Its Quartz Tile, made of quartz sand, limestone and PVC, accounts for the most volume, but Upofloor’s PVC-free products make up the bulk of revenues.

In the long run, the firm is looking at going even further and moving away from thermoplastics altogether to produce bio-based products along the lines of linoleum.

American Biltrite’s AB Pure is somewhat different, because it’s not an alternative for LVT, and it doesn’t offer the level of visuals that can effectively compete, though one of its biggest selling points is actually in the visual-it will retain its colors and it won’t shift yellow or blue over time.

However, AB Pure does offer a distinct advantage over rubber, which is not a thermoplastic and hence can’t be remelted. While used rubber floors are generally downcycled, AB Pure’s polyolefin can be remelted and reused.

GOING FOR GREEN
From a chemistry standpoint, these products are more environmentally friendly than PVC products, but greener chemistry is not necessarily the same as green chemistry. For instance, all of these products are still based on fossil fuels. And they don’t necessarily have established reclamation strategies. And it’s worth remembering that just because a plastic is recyclable doesn’t mean that it will be recycled. That’s the big difference, for instance, between recycled PET bottles and recycled PET carpet fiber. It’s incumbent on manufacturers touting their sustainability to choose polymers that not only perform well, eliminate chemicals of concern and reduce emissions, but that also have a viable system in place after the end of their useful life.

Other issues include where the product is manufactured, the environmental footprint of that facility or company, and the embodied energy of the product. In other words, do these products use less energy in their manufacture than LVT?

And then there’s price. If these new products perform well but remain pricey, they’ll still find a strong niche in sectors like healthcare, education and probably corporate. But if they can compete head to head on price with LVT, then this may be the beginning of a major trend.