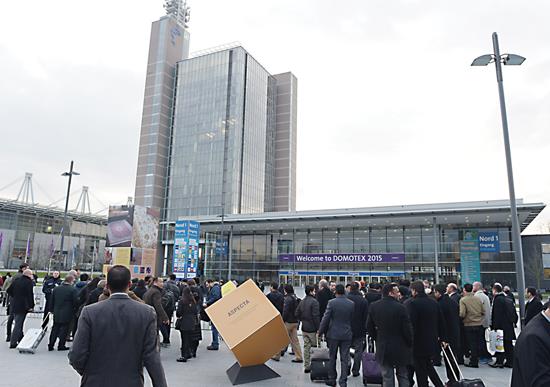 Two international annual flooring expos stand out when it comes to global status. Cersaie in Bologna, Italy—held in September—focuses solely on ceramic tile, and Domotex in Hannover, Germany—held in January—takes the lead for all other flooring surfaces. Both of these shows have common elements that contribute to their status as the preeminent global shows for their categories.

Naturally, these shows draw attendees and exhibitors from around the world, but they go much deeper than merely attracting the transactional trade in the middle of the business—i.e. finished goods producers and their immediate customers. Further up the supply chain, these international expos also attract all the component producers, raw material suppliers and machine manufacturers, as well as innovators with the latest click systems and other inventions that augment the products’ performance. And downstream, they attract architects, interior designers, facility managers, distributors, retailers, installers and, yes, even the press.

Every other year, Domotex competes with the BAU builder show in Munich, which overlaps with the last two days of the Domotex Hannover show. While this overlap does negatively impact the overall attendance numbers for Domotex, it doesn’t really have much effect on the international attendance, since BAU is a domestic show for construction products and therefore only impacts German attendees.

Domotex Germany 2015, which ran from January 17 to 20, attracted 40,000 visitors from 100 different countries, which was up slightly from 2013. There was a significant upswing in attendance from the Middle East and Asia, and more than 70% of attendees were senior executives. With 1,300 exhibitors staged in 12 halls (covering 85,000 square meters) from 63 countries, show management touts this as the world’s largest display of floorcovering.

Deutsche Messe, the company that owns and manages Domotex, does a worthy job every year of creating programs that attract attendees to the show. One example is the Innovations@domotex display, which is now in its second year and has been expanded to three locations on the show grounds. One of the display locations is focused on carpet and resilient flooring, another on wood and laminate, and the third on handmade area rugs. In each area, judges evaluate all the products that are entered by the exhibitors and select the winning products in each category. One of the refreshing aspects of this program is the objective nature of the judging and how the products that win truly are distinctive, either from an aesthetic perspective or a scientific standpoint. One key advantage of this concept is that it allows the attendee to quickly find the most interesting, innovative products rather than canvassing all 1,300 booths to find them.

This year, two of Mannington Mills’ products were selected as winners in the Innovations@domotex competition. One award went to Design Local, a modular carpet collection, and a second award went to Intersected, a new LVT collection.

Another valuable show attraction was the guided tours hosted by top international designers. Several times a day, tours were offered that enabled participants to hear from

select exhibitors about how their products were made or what inspired the designs.

PRODUCT TRENDS
Naturally, the abundant number of new LVT products on display reinforced the notion that the expansion of this resilient flooring category is a global phenomenon. A growing subset within this category is made up of LVT composites, where vinyl is the wearlayer over various core materials that serve as a waterproofing and/or rigid substrate to make installation easier, mitigate water issues or eliminate the telegraphing of subfloor imperfections. Thomas Baert with Lamett had a new collection with this type of construction as did Beaulieu International Group which has branded this construction RCB (Rigid Composite Board).

Variations on that concept included a new laminate floor construction by Classen, which has developed what it calls CSF composite material—made up of natural wood fiber blended with polymer coated particles—for its product Neo, with a PVC-free wearlayer.

When it came to carpet, PET was a little more prevalent among companies that focus on the residential sector, as was carpet cut into curved shapes. As has been mentioned in previous Domotex reviews, residential carpet in Europe is much more colorful and not as plush as what consumers prefer in the U.S.

Unilin held a press event on the first day of the show where it rolled out its new LVT offering, which it sells in Europe under both the Pergo and Quick-Step brands. LVT is a relatively new category for Unilin, which was quick to point out that its new LVT plant in Belgium uses a construction process where the planks are never pulled over a press roll—preserving the integrity of its fiberglass substrate and giving it more dimensional stability.

NOTEWORTHY U.S. EXHIBITORS
One of the core benefits of attending Domotex is to discover firsthand the emerging products and innovations in the global flooring business. Most companies that have something new to introduce will time the release of that new development so it coincides with this show.

Each year, there is blurring of the lines as it relates to the nationality of the core global flooring suppliers. Mohawk, which is now the largest flooring company in the world, did have a carpet presence in the back of the Lano booth, and right across the aisle, it had a small booth devoted to rugs under the Mohawk Home banner. But at the same time, IVC and Unilin were huge exhibitors, so Mohawk’s products were well represented under many different names. Shaw Industries, still the global leader in carpet, had a small meeting room set up in the AFA pavilion but no display area. Armstrong, Beaulieu of America and Tarkett—all three of which exhibited last year—chose not to participate this year. Mannington Mills and Masland had nice displays focused on promoting commercial carpet tiles. In LVT, both EarthWerks and Metroflor hosted large exhibits.

There were two U.S. based pavilions—one hosted by the Hardwood Trade Association (NWFA) and the other hosted by the American Floorcovering Association (AFA)—in which several U.S. based equipment manufacturers and component suppliers exhibited. A complete list of exhibitors can be found on the Domotex website.