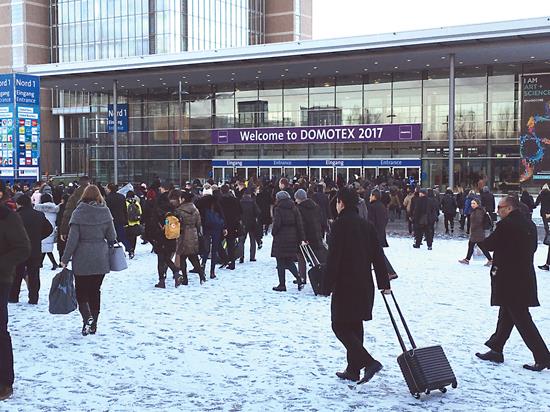 The Domotex Germany show, held in mid-January, earned its mantra once again as “the world of flooring” with 90% of its exhibitors coming from outside Germany. This year’s attendance, at well over 40,000, was impressive for an odd-numbered year, since that’s when the show’s domestic, German-based audience often opts to attend the Bau architectural and builder show in Munich.

The hum from this year’s event was enthusiastic and optimistic. Once again, the show attracted flooring professionals from around the world, and its 1,400 exhibitors from 61 countries filled the 12 massive buildings dedicated to the show. Out of the total visitors, 46% were from the European Union, and an additional 14% were from non-EU European countries, 23% from Asia, 10% from America and 5% from Africa. That means that 40% of the show’s attendees traveled to Hannover, Germany from another continent.

It is difficult to compare this show to the domestic shows held in the U.S. While the majority of the Domotex booths are dedicated to finished flooring products, there is a considerable amount of space allotted to raw materials and component suppliers, as well as the machines that make flooring. There are also more product vignettes instead of just racks of products, and the larger exhibitors offer their visitors food and drinks from a catered area within their exhibit space.

Refreshingly, Deutche Messe, the firm that manages this show, works hard every year to create fresh content that attracts designers, retailers, importers, distributors and installers. Months before the show, a jury of designers judge the newest flooring products, and the winners are put on display in three separate Innovations@Domotex areas. Guided tours (in English) are hosted by top architects and designers, enabling visitors with headsets to see the show from their perspective.

News items from the show include the continued evolution of multilayered LVT from a WPC core to a rigid core, as well as word that Mohawk is converting a vacant IVC building in Belgium (that formerly made laminate) into a brand new carpet tile plant to service Europe. It was also interesting to sit down with DSM-Niaga, and learn more about the firm that owns the patents for Mohawk’s new Airo carpet, which is 100% PET and is constructed without the use of latex. There was also news about Innovations 4 Flooring, the firm that developed the Triplelock click system, and its new strategic partnership with Classen.

The keynote architect this year was Swiss Argentinian designer Alfredo Haberli, who believes there is more to flooring than aesthetics. He predicts that life in the near future “will include the integration of flooring sensors with computers in a trend called smart living.” He also is a strong advocate for using natural materials that are part of the ecological world. Some of his slides showed a design trend called mirroring, where wood flooring is installed on the ceiling.

One last news item that we covered briefly in an editorial in our February issue is the total reformat of the layout for this show in 2018 to accommodate the global shift in the type of flooring products being sold today, as well as the show’s renewed focus on having an annual theme that reflects trends in the marketplace. Next year’s them is “Unique Youniverse,” a focus on individualization and self-expression. Also, next year’s show will run from Friday to Monday instead of the Saturday to Tuesday schedule that the show has followed for many years.

U.S. EXHIBITORS
The U.S.-based firms that exhibit at this show are Beaulieu of America, Earthwerks, Mannington Commercial, Masland, Metroflor (Aspecta), Mohawk (IVC and Unilin), Phenix and US Floors (Coretec). There are also two U.S. based pavilions, one hosted by the American Floorcovering Association (AFA) and the second by National Wood Flooring Association (NWFA). These pavilions host dozens of U.S. firms that choose to come as a group-firms like Card Monroe, Tuftco, Pharr Yarns, Textile Rubber and DuPont.