Best Practices: Baker Bros. moves into the next phase of growth - Apr 2018 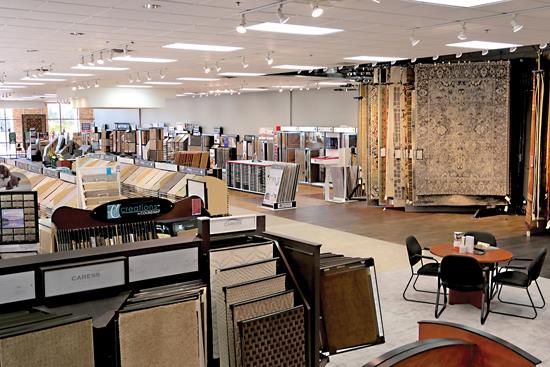 Twelve years ago, Phil Koufidasis bought Baker Bros., a successful, seven-store, Phoenix-area retail business (plus one to-the-trade location) started by Jack and Carl Baker in 1945. With 20 years under his belt on the wholesale side of the business-having started as a sales rep with Shaw in the mid ’80s-Koufidakis has a big picture view of both the retail business and the industry, which informs his day-to-day decisions in moving Baker Bros. through the next phase of growth.

A 73 YEAR-OLD BUSINESS IN TRANSITION
New York born and bred, Koufidakis likes to say that he changed sides of the industry and the country all in one moment. Around the turn of the century, Mukilteo, Washington-based SuperFloors bought Baker Bros. and, in 2003, hired Koufidakis to run it. Just a few years later, Koufidakis purchased the business from SuperFloors with a partner, whom he has since bought out. Regarding the geographic aspect of the transition, Koufidakis admits that he will always miss New York, but regarding the career change, he hasn’t looked back, “I love this business, the company, the people in the company, the insanity of retail, the never-the-same-place-twice aspect of retail. Retail requires more creativity than the wholesale side of the business. I like to say that retail is more of an art, and the builder side is more of a science.”

Since his purchase of Baker Bros., Koufidakis hasn’t focused on adding locations but on enlarging sales tickets. To that end, Koufidakis has added non-flooring products to his lineup. “Our goal is to grow the company with great people and adding additional surfaces,” says the entrepreneur. “I think that the transformation of the company will take us into a place where we are more than just about flooring. We are going to expand significantly in our countertop and window treatment businesses.”

To be able to focus on this transition, Koufidakis has hired a full-time general manager to handle the showroom and staffs across the entire brand, allowing him to turn his attentions to strategy. Baker Bros.’s expansion into countertops is recent, and Koufidakis reports that establishing the business is a slow-moving process internally, as it’s always a challenge to get staff up to speed on and comfortable in a new category. “So far, so good,” he summarizes. “The size of our sales and the margins we’re seeing are encouraging, and this will be a big push moving forward.”

He continues, “We think this is a natural fit for the business. Everyone is looking to make a $9,000 customer into a $29,000 customer, and with the flooring industry virtually stagnant for several years, you have to find new ways to expand. On the consumer end, trying to find reliable and reputable dealers in the market is a frustration, but when you have a reputation of 73 years in business, as we do, you’re more like a Nordstroms-there’s a lot of built in trust. Plus, we’re already in the customer’s home. When you ask a local consumer where to buy shutters, and they tell you they have no idea, then I know that’s a good business for Baker Bros.”

Baker Bros. offers a full range of flooring products, including ceramic tile and area rugs (about 400 to 500 per store). Material-only makes up a small portion of sales, but that is increasing as hard surface-and in particular hard surface click products-grow in popularity.

FAN OF THE NFA
Koufidakis was asked to join the NFA shortly after buying the business. Interestingly, Baker Bros. was one of the founding members of the buying group but, through a series of transitions-including purchase by Shaw as part of its vertical integration in the mid-1990s-lost its membership. “I believe it’s the greatest association in the business,” he says. “We share experiences. I am planning several changes going forward. I can go to any one of the 41 members, and they will share their experience. They’re some of the smartest people in the flooring business.”


Koufidakis describes the customer base he serves as higher end and points out that while his stores are all relatively close together-the most distant two are only 60 miles apart-and all within the greater Phoenix area, customers don’t typically shop various Baker Bros. stores but stick to their closest location; in other words, his locations are not competing against one another. “We have terrific demographics,” he says. “Our customers are not coming in shopping on price, but because their mom or grandmother told them it was the best place to go. They have a high expectation of us.”

Interestingly, Koufidakis sees one of the most important of his roles as being the steward of the Baker Bros. brand, helping the business to live up to the standards that the Baker brothers established in 1945. To that end, when the recession hit, Baker Bros. did not change its standard to win sales. “It would have been easy for us to compete on price, but we would have put ourselves out of business in the end. We are a service company. One of the things that separates us is our focus on style, design and quality all the way through. If you want tasteless and cheap, we’re not you’re company-and I’m okay with that. When a customer leaves Home Depot and comes to us, it’s because there was something missing there. Everyone wants the best they can afford, and it’s our job to give them that.”

Koufidakis has strong opinions about the direction that the industry is headed in that regard. “This industry has always been manufacturer driven, working from back to front,” he says. “We drove people to soft carpet because we said they wanted it, but they didn’t. No one heard a customer saying, ‘This carpet isn’t soft enough, so I’m going with ceramic tile.’ Sure, everyone wants carpet to be soft, but no one bought more carpet because it was softer. Also, the soft fibers didn’t allow for style, so carpet became boring again. And now we’re seeing that soft carpets aren’t lasting as long, which means that consumers will develop a bad taste in their mouths about carpet. It’s the same with waterproof floors today. There’s so much buzz about waterproof, but the industry didn’t have problem with water. However, on the sales floor, we focus on it, and customers follow the path of least resistance. And for RSAs, it’s an easy selling point, ‘You want it to be waterproof, don’t you?’ We create these self-fulfilling prophecies in the flooring industry, and ultimately nobody wins.”

He also believes it’s important for the industry to realize that consumers don’t buy “the back of the product” but the front and expresses significant concern about how consolidation among manufacturers will impede progress in the industry regarding innovation and style.

Ultimately, Koufidakis doesn’t believe that consumers want “cheap.” And he points to ceramic tile as one segment in the industry that is moving in the right direction. “Tile has gone from the least expensive product in my showroom to one of the most expensive. It’s one place in the industry where we have taken a $3,000 sale and made it a $9,000 sale.”

PEOPLE POWERED
What vision does Koufidakis have for Baker Bros.? “Every time someone mentions the company or someone working here, I want them to say, ‘Those are great people. That’s a great company.’ I’ll put my team up against anyone’s.”


Koufidakis recently hired four RSAs and has made a strong commitment to educating them, as well as the rest of his staff. The team is using NWFA (National Wood Flooring Association) University as well as manufacturer training programs, and Koufidakis believes that having well-educated RSAs is an incredibly important differentiator. “We are taking advantage of every possible opportunity to do training,” he says. “We have to be better than everyone else.”

On the installation side of the business, training can be tougher, especially for those who use subcontractors, as Baker Bros. does. As a dealer, Koufidakis can provide training programs and suggest that his installers participate, but he can not require that they do so. Due to Phoenix’s proximity to the border, however, installation labor is plentiful, which can provide the labor pool with greater incentive to expand their knowledge and thereby increase their hireability.

In fact, Koufidakis points out that ceramic, typically one of the costliest floors to install, is made much more affordable because his labor costs are minimized. “I pay one third less for labor, and that makes ceramic tile a much more viable option,” he says.

INVESTMENT IN DIGITAL MARKETING
Baker Bros. is going long with online advertising. In 2017, the company invested, as a percentage of advertising, more than 50% in web-based marketing, whereas only a year or two before that it was investing virtually nothing in these efforts. This includes strategies such as retargeting and paid search. In addition, the company is reaching customers through direct email and updating its website to make it more engaging. “[The website] is,” says Koufidakis, “ultimately, where the customer is going for information, and one of separators we can have [is] giving them the same visual online as we give them in-store.”