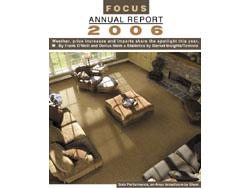 On the surface, 2005 seemed like an excellent year for the floorcovering manufacturing sector as sales rose a very respectable 6%, to a record $24.2 billion. In spite of a slight slowdown in home sales this year, the baby boomers continue to spend money on their homes and on their floors, and the commercial market is crackling along at levels we haven’t seen since 2000. By all accounts, though, much of the increase in sales last year came from increased prices, which in turn came from the dramatic increases in raw material costs that began in 2004 and accelerated at the end of last year.

As everyone in the floorcovering industry knows, most of the products the manufacturers make and sell are derived from oil. And so is the fuel that drives their plants and the trucks they use to deliver their products. While the raw material price increases of 2004 were precipitated by the war in Iraq and the increased demand for oil from developing countries, particularly China and India, two much less predictable elements were added to the mix last year: Hurricanes Katrina and Rita. Both hurricanes hit the Gulf Coast, where most of the country’s oil and gas infrastructure is located, and caused severe damage to oil and gas refineries and storage depots. That resulted in even more severe shortages at the end of last year.

The result of all this: retailers and contract dealers had to endure a series of price increases throughout the year, increases that seriously impacted the bottom lines of every retailer. The manufacturers suffered, too. Most were unable to raise their prices enough to cover all their raw material cost increases. As a result, profits were down for most players.

In the past, the U.S. floorcovering industry seldom had major concerns with the forces of nature or politics, but both are now becoming significant factors in the business. So far this year, price increases haven’t been an issue for the retail sector, but predictions of another strong hurricane season may change that toward the end of the year. Smart dealers should be looking for ways to cut unnecessary costs.

Another outside factor that impacted the U.S. floorcovering industry last year: the weakness of the dollar against the euro. Interestingly, the weak dollar caused exports to rise, but it did nothing to prevent imports from rising as well, as foreign manufacturers continue to see the U.S. as the most attractive consumer market on the planet. Today, imports account for more than 28% of the total U.S. flooring business. Much of those imports are now coming from Asia and Latin America, where the exchange rate is not as significant as it is between the U.S. and Europe. Some European players have made big investments here in an effort to capitalize on the disparity between the dollar and the euro, particularly in the laminate and ceramic sectors. In the past two years, six European manufacturers have either acquired or built new laminate plants in North America. The Belgian firm Unilin began the parade when it bought the Homanit fiberboard plant in Mount Gilead, North Carolina in 2003, then built its Quick-Step laminate flooring plant in nearby Thomasville the next year. The Austrian producer Kronotex broke ground on its South Carolina plant the same year. The output from that plant is now being sold under the renowned Formica brand name. Last year, sister company Kronospan laid out plans to build a plant in Alabama.

The parade continues this year. In January, the German coreboard manufacturer Pfleiderer bought Canada’s Uniboard, which will begin building a U.S. plant sometime this year. The high end Spanish producer Faus began production in a 500,000 square foot, Calhoun, Georgia plant two months ago, while a joint venture between Tarkett and the Chilean fiberboard producer Aconcagua Timber has begun construction on a plant in Pennsylvania.

These new ventures will make the highly competitive and still rapidly growing laminate sector even more interesting in the future. Quick-Step, which was acquired by Mohawk last year, is already challenging the nation’s two largest laminate producers, Pergo and Shaw, for the number one position in that business.

The U.S. ceramic tile sector has always been dominated by foreign producers, most notably Italians and Spaniards, but the weak dollar has also managed to attract a few European ceramic producers to this country in the past two years. The Italian producer Marazzi has been successfully producing ceramic here under the name American Marazzi for 20 years, but that company was unique until Florim acquired the Tilecera plant in Tennessee five years ago. Two years ago, Dal-Tile started a joint venture with the Italian firm Emil Ceramica. Last year, GranitiFiandre opened a new plant in Crossville, Tennessee, and just three months ago, the Italian firm Panaria bought Florida Tile.

By some accounts, this is only the beginning of foreign interest in building on U.S. soil. That interest, though, is likely to continue only as long as the euro is stronger than the dollar. At press time, the euro was valued at $1.21, which means that products made and sold here have more than a 20% price advantage over products imported from Europe. That’s a huge difference in the price-competitive floorcovering industry.

European manufacturers aren’t the only ones interested in the U.S. floorcovering business. Last year, 26% of U.S. hardwood sales were imports. Most of those imports came from China and Brazil, with long time trading partner Canada slipping into third place. Much of those imports are base grade products big manufacturers like Shaw, Mohawk and Armstrong are sourcing from China, but there’s a growing number of importers that are establishing positions of prominence in the hardwood sector. The Swedish company Kahrs has been doing business here for years now, but newer players like Pinnacle Interior Elements, whose products are made in China, and the Brazilian firm BR-111 are establishing thriving businesses here that give floorcovering retailers much greater options than ever before. We feel that this trend will not only continue, but grow.

While the influence of foreign players on the U.S. floorcovering business grows, so do the two largest players in the industry: Mohawk and Shaw. As you can see in the chart on page 36, both companies solidified their positions during the past year through a series of acquisitions and other moves aimed at increasing their shares of all the major product categories. Interestingly, the two leaders took different tacks in their quests to remain dominant. Shaw integrated backwards through its acquisition of the nylon fiber business of Honeywell and the backings business of SI Flooring, while Mohawk took a big step toward being a dominant player in the laminate sector through its acquisition of Quick-Step. It also integrated its carpet business by acquiring backings manufacturer Wayn-Tex and the Alabama plant of Propex, the world’s largest backings producer.

While Shaw and Mohawk continued to consolidate their holdings and gain marketshare, there was plenty of activity in other companies, as you can also see in the box on page 36. One of the more interesting acquisitions was Canada’s Kraus Carpets’ purchase of Orders, the big South Carolina distributor. The Orders acquisition is the sixth for Canada’s largest carpet manufacturer; the firm now has four sizable distribution points in the U.S. and two in Canada, making it the only other North American carpet manufacturer besides Shaw and Mohawk with its own distribution network.

This year, we decided to focus on the Top 10 players in each of the major product categories—Carpet, Area Rugs, Hardwood, Ceramic, Resilient and Laminate—since those players account for so much of total U.S. sales.

For an indepth look at the various flooring categories, see the May 2006 issue of Floor Focus.