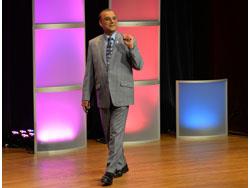 Dalton, GA, February 11, 2021-World Floor Covering Association (WFCA) announces Pami Bhullar of The Dixie Group as the inaugural recipient of the WFCA Luminary Award. The award will be presented at The International Surface Event in Las Vegas in June.

The Luminary Award shines a light on those who have inspirational success in their careers, in their communities, and in their impact on others’ lives. According to WFCA CEO Scott Humphrey, “The purpose of the WFCA Luminary Award is to honor excellence and inspirational actions of people for their mentorship, leadership and contributions advancing the floorcovering industry. Pami is a leader who makes the world around him better. We are proud to celebrate all that influencers do for our industry.”

Bhullar, who recently announced a transition from Invista to The Dixie Group, entered the flooring business over 40 years ago. He began his career with the May Company where he learned the trade and how to impact people, then became the Director of the Rug Gallery in Phoenix, Arizona before he landed at DuPont in 1998. Bhullar was instrumental in developing and building the DuPont Flooring Center (now Stainmaster Flooring Center), an innovative selling system that rapidly expanded into the preeminent flooring retail program in the industry, with over 400 retailers in North America participating. He later was a driving force in designing the Stainmaster Showcase Dealer program and has successfully reinvigorated and perfected the “Private Sale” concept for retailers.

Although Bhullar has had a tremendous influence on retail systems and programs, he is most widely known for his contributions to the development of floorcovering professionals. Throughout his career, Bhullar has trained over 10,000 sales professionals while making each one feel that personal touch. He is an exemplary mentor to anyone he meets and is driven to help others become the best they can be. Whether he’s imparting retail, sales or marketing wisdom, the power of selling through emotional connection is at its core.