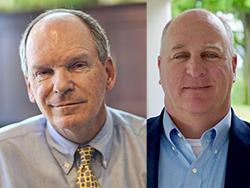 Jackson joined Shaw in 1996 from Arthur Andersen, where he worked for 15 years, including serving as a key tax partner for Shaw. During his first five years with Shaw, he served as CFO of a public company, managing relationships with Wall Street, bankers, and others. Over the past 19 years under the Berkshire Hathaway ownership, Jackson expanded the CFO role to also lead many of the administrative areas within Shaw.

Kirkpatrick also joined Shaw in 1996 from Arthur Andersen, where he was an audit manager focused on the manufacturing and financial service industries. During his 24 years with Shaw, Kirkpatrick has led the company’s internal audit, financial services, treasury, and accounting functions. In addition, he led the due diligence and integration teams that managed many of Shaw’ acquisitions. He played an integral role in the dealer acquisition and development of Spectra.

Listen to the interview with Ken Jackson about his 25 years with Shaw Industries here.