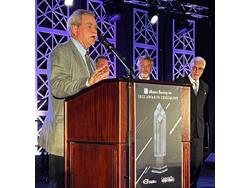 Orlando, FL, March 17, 2022--Alliance Flooring presented its 2022 awards on March 15 at a dinner sponsored by Shaw. The event was part of the annual convention, which took place at the Rosen Shingle Creek in Orlando, Florida.

Brent and Rhonda Compton owners of Rocky Mountain Flooring in Twin Falls, Idaho was named the CarpetsPlus ColorTile retailer of the year.

Gene Podell of Carpetland USA of Virginia was named Carpetland retailer of the year.

Karndean was named members’ choice supplier of the year.

The 2021 CarpetsPlus and Carpetland USA National Retail Salespeople of the Year are as follows:

Icon of excellence awards were presented to Ann McDermott and Welton Davison, both with Shaw.