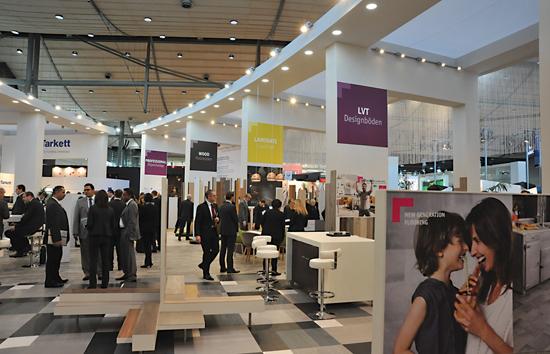 Founded in 1989, Domotex is the hub of the floorcovering trade from a global perspective, the premier meeting place for professionals whose business is focused on international trade. The show covers every flooring category with the exception of ceramic tile, which has its own international show every September in Italy. In the European market, ceramic is the number one flooring category, and carpet is in second place, dominated now by Turkey.

With its lack of visa requirements and expansive Deutsche Messe AG fairgrounds, Germany is an ideal location for the show. Those in attendance at Domotex are there to do business with the world, and the show’s January timing makes it a good way to start the new year.

Domotex is comprised of 12 separate halls: three for machine-made rugs; four for handmade rugs; one for carpet, including equipment manufacturers; one for contract (which the Germans call object) floorcovering; one for installation products; and two for hardwood and laminate. Though styling tastes across the world vary dramatically, Domotex is large enough that nearly every look and construction is represented.

Joe Williams, vice president of international business for Beaulieu America, explains that his firm, the American manufacturer with the largest space at the show, attends Domotex to make contacts and gain exposure, and, in fact, gets a lot of wander-up traffic from people with whom Beaulieu has never before done business. At the show, Beaulieu promotes its Bolyu brand to the commercial market, its Aqua brand to the hospitality market and its Bliss brand to the residential market.

Domotex takes it international stature seriously and places 20 representatives throughout the world to promote the show year-round. And in spite of the anemic European economic conditions—the economy grew less than 1% in 2013—Domotex has maintained it strength.

Special features at this year’s show included innovation@domotex, The Wood Flooring Summit and 1st Rug Avenue. A nice perk at the show is that European exhibitors offer free food and drink to attendees.

LVT
The number of LVT producers exhibiting at Domotex increased dramatically this year, with over 50 stands dedicated to the category. This confirms that LVT’s popularity is increasing worldwide, as we have seen in the States. U.S. based LVT manufacturers exhibiting at the show included Bolyu, Earthwerks and Metroflor, which had cubes across the fairgrounds introducing its new Aspecta brand, a colorful commercial dry-back product. Tarkett and IVC, which have foreign based headquarters and a large presence in the U.S., were also well represented at the show.

In addition to the increased capacity that will result from all the new U.S. based LVT manufacturing—from Mannington, Armstrong, IVC, Shaw and eventually Mohawk—a billion square feet of additional LVT capacity is coming on line in Asia as well, so clearly the world is anticipating a significant and increasing demand for LVT.

Hardwood and Laminate
Hardwood and laminate were the central focus for much of the promotional hype of this year’s Domotex, as the show repeated the Wood Flooring Summit theme that it debuted in 2012. There was considerably more engineered hardwood than solid, which follows the trend in Europe. And manufacturer Paradon introduced an interesting product with contrasting wooden shapes.

Though laminate is losing marketshare here in the U.S., that’s not the case abroad, where firms are producing more authentic-looking laminates that are wider and longer with realistic character markings. In fact, the European Laminate Trade Association reports 0.7% growth in the category.

The Kronotex Group, the world’s largest laminate producer, was represented at the show, as well as Kaindl and Lamett, which had several new visuals that could breath new life into the category—even here in the States.

Carpet
This is the year, it seems, that marks the penetration of both soft fiber (low DPF) and polyester into the European market. However, that market’s adoption of residential PET is still nowhere near to what it is in the U.S., where it accounts for an estimated 40% share. That may be due, in part, to the fact that nylon, called polyamide in Europe, has a lower raw material cost, so the pricing window between polyester and nylon is smaller. Aquafil is the biggest independent supplier of nylon 6 in Europe. And just as we see in the U.S., wall-to-wall carpet is also on a downward trend throughout Europe.

European produced carpet is different from U.S. produced. The backing is thicker, the face thinner and the palette more colorful. That is one reason that U.S. carpet manufacturers exhibit at Domotex; they are offering a product much different from what is produced in that part of the world.

There were several interesting novelties at the show. Germany based Paradon had a click modular carpet, and another firm was introducing a turf product with fiber the color of dead grass tufted in to increase the realism.

U.S. based exhibitors focusing on selling commercial carpet were Masland, Bolyu and Mannington, and Mohawk’s brand was being represented in the Lano exhibit. On the equipment and fiber side, Pharr, Dupont and Aquafil were also exhibiting.

Area Rugs
A total of seven separate buildings are devoted to area rugs from around the world. There was an increase in machine-made area rugs at this year’s Domotex, and the rumor among attendees was that the shag look is ebbing worldwide. Oriental Weavers exhibited. However, Mohawk Home, which exhibited last year, was absent this year.