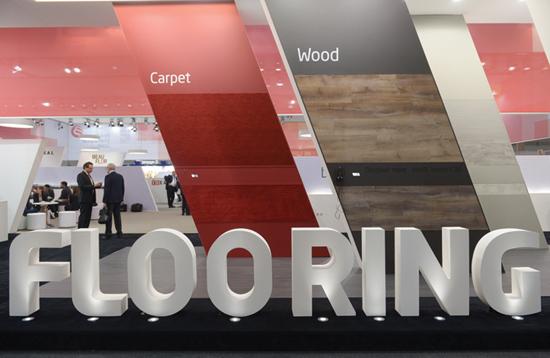 Even though attendance at Domotex was down this year, it continues to hold its status as the world’s largest floorcovering show, and there was plenty to see at this year’s event in Hannover, Germany.

>First and foremost was the BAU show—a building materials expo that is held every other year in Munich. And since flooring is obviously a building material, several major exhibitors and attendees opt to support this show, which draws over 235,000 people. Given that these shows overlap every other year, if you compare Domotex’s attendance this year (roughly 40,000) with 2011, it was actually up slightly. (Domotex’s attendance for 2012 was closer to 45,000.) A second deterrent to attendance is the European economy, which is flat at best and is facing some strong economic headwinds. A third factor is Domotex’s decision to hold smaller trade shows in China, Russia and the Middle East, thereby reducing the need for suppliers and attendees to come all the way to the original show in Germany.

One of the unique characteristics of this German edition of the Domotex series of trade shows is its international flair and overall size. This event draws over 1,300 exhibitors from 60 nations and is staged in 12 massive buildings. About half the attendees come from Europe, 21% from Asia and 11% from the Americas. This year, the amount of space rented by U.S. companies increased 54% to over 22,000 square feet. In addition to the two U.S. pavilions sponsored by the American Floorcovering Alliance (AFA) and the National Wood Flooring Association (NWFA), several U.S. based suppliers had a substantial presence. Mohawk, for example, had three different exhibits: one focused on rugs, one on carpet and one on laminate. Beaulieu of America, Dixie (Masland), Mannington Commercial, Swiff-Train (Earthwerks) and Styron also had large exhibits. While much of this show is focused on selling finished floorcovering to wholesalers, distributors and retailers, there are also a large number of equipment manufacturers and component suppliers. One anomaly, however, was Lumber Liquidators presence. Lumber Liquidators came to Domotex this year for the first time to sell Bellawood on a wholesale basis to other retailers around the world.

As most industry veterans know, styling tastes for floorcovering vary widely from country to country, and this fragmentation not only affects the look and feel but also the construction. Even in Europe, the coloring and construction of carpet, for example, varies widely from Germany to France and over to the United Kingdom. As a result, it’s often been said that there is no such thing as a European market, since each country demands its own color line, face weights and mix of components. In the U.K., for example, the majority of the carpet sold is polypropylene, whereas the rest of Europe is about 80% polyamide (their name for nylon), and in Germany, it’s almost all polyamide. And while you do find polyester rugs, there is virtually no polyester used in broadloom carpet. In addition, most broadloom carpet is produced in a four meter width, and almost a quarter of what is sold is five meters wide. In comparison, here in the U.S. our widest width, 15 feet, equates to 3.66 meters. Much of the carpet produced in Europe comes from Belgium, but thanks to fragmentation of the market and the lack of economic growth, most of the carpet mills are struggling to turn a profit. In the last ten years, the size of the European carpet market has declined 25%.

The reason that the Belgium manufacturers have not ventured into the polyester carpet fiber arena is subject to debate; some say that lack of profit and the shrinking market size is a deterrent to new extrusion investment, while others say that Europe simply doesn’t like shiny, soft carpet.

In the hard surface area, Domotex has specific buildings assigned to the hardwood (they call it parquet) and resilient categories. But thanks to the strength of the Cersaie show held every year in Bologna, Italy and also due to the fact that ceramic tile is mostly sold through different channels of distribution in Europe, there is very little space devoted to tile or stone.

While there are some definite hard surface styling differences between what you see here in the U.S. and Europe, the differences aren’t as far apart as what you see with carpet. And similar to what we’re seeing here in the U.S., LVT is taking market share from laminate. But the laminate category—which started in Europe—is much further entrenched, and it’s fighting back with some striking new visuals. As the rustic look continues to thrive, some producers have perfected the scalloped edge and weathered gaps that prior to now were impossible to emulate.