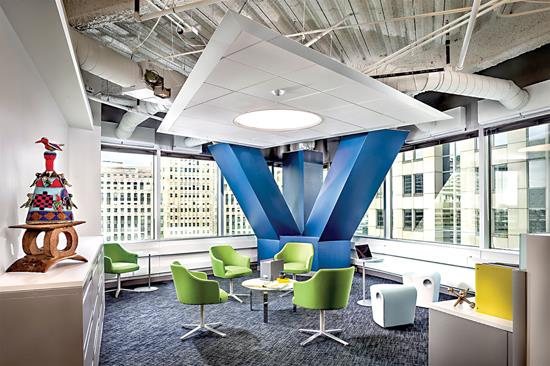 In this year’s Top 250 Design Survey, the A&D community reports that the most significant developments are not in sector activity or budgets or client demands but instead are largely within commercial flooring itself, from the shortage of qualified installers to the surge of LVT in the market and the one-stop-shop phenomenon.

Designers are dazzled by their options, at least for now. In the last few years, as LVT has taken the market by storm, there have been two major, and related, developments. One is the investment in domestic LVT production by Mannington, Shaw, IVC (Mohawk), Armstrong, Tarkett and FloorFolio. The other is how the major carpet mills have fully embraced LVT, diving into the deep end, flooding the market with their products, and creating both huge opportunities and widespread confusion.

Shaw, Mohawk, Mannington, Milliken, Tandus Centiva, Bolyu—several of the leading carpet mills are now bundling LVT either with their own manufacturing or through extensive sourcing programs. And they’ve been heavily marketing their programs, which often include coordinated hard and soft surface lines, to A&D firms, apparently with good success. The ability of these mills to offer a wide range of flooring categories can simplify the specification process. A design firm that has enjoyed success working with Shaw carpet, for instance, generally won’t think twice about getting its resilient flooring from Shaw as well.

All these carpet mills suddenly offering resilient and hard surface flooring seems to have engendered a wide scale perception among designers that all mills now offer all types of flooring, to the extent that a noticeable percentage of the votes for favorite hard surface manufacturers were cast for carpet mills that only sell carpet. And a few carpet votes were cast for resilient specialists, like Armstrong, that don’t offer any carpet.

Clearly, all of this is going to have a big impact on the fortunes of flooring producers. For one thing, it means that the big players are likely going to increase their share of the total flooring market, diminishing the fortunes of many niche producers and specialists of both hard and soft surface flooring. And in the long run, this could mean an increased homogeneity in offerings—already a major complaint among A&D firms.

The other critical issue in flooring is installation. The recession decimated the ranks of installers on both the residential and commercial sides of the industry. Those who could manage it gravitated toward other trades, many of which pay better and aren’t as hard on the body. So when the market stabilized and demand for installers started to rebound, there was a dearth of qualified tradesmen. And since then the problem has only grown worse.

So now that there’s more commercial activity, more floors are going down—and so is the quality. Demand is growing for certified installers, who are few and far between, and there’s no clear indication of the strategy for bridging that gap. And at the same time, there’s more pressure than ever to get projects completed in shorter cycles (with smaller budgets), creating an ideal climate for a colossal wave of installation failures.

SECTOR OVERVIEW
Designers were asked about their top three projects over the last year, and which sectors they were in. And for the second year in a row, the dominant commercial sector, corporate, has continued to chug along, making incremental gains, but there’s been more growth in the education sector, in parts of healthcare and in the hospitality sector. The most active sector for large projects for the second year in a row is education, where private dollars have been funding higher education projects, and public money in pockets around the country has been driving the completion of K-12 jobs.