Surfaces 2021: A much smaller show in mid-June still managed to deliver some valuable connections - Aug/Sept 2021 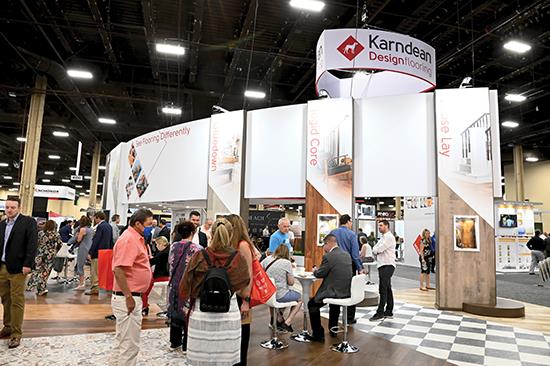 For decades, Surfaces has been the leading residential flooring show in the U.S. The event is typically held in late January, which is ideal for exhibitors releasing their new products for the year and also ideal for attendees (retailers in particular) because it’s seasonally the slowest time of the year for store-level interaction with consumers, making attendance that much easier. But when it came to the 2021 show, Covid forced the flooring convention to shift from its accustomed slot.

This year, Surfaces was held in Las Vegas from June16 to 18. In planning for the event, Informa Market, which owns and manages this show, eliminated the Converge education program, opting instead for sessions on a stage on the show floor, the TISE Live Stage. And according to Dana Hicks, director of events for Informa, the program was well received. In fact, when the show returns to the Converge program for the next show-January 25 to 28, 2022-Informa will keep the TISE Live Stage, and it plans to ask its speakers for the education program to do a session on the show floor.

Also on the show floor was the product demo stage, which was well attended, and the installation competition, with the winners announced on the Live stage on the last day of the show.

EXHIBITOR HIGHLIGHTS
Nobody anticipated that the June show would be as bustling and fast-paced as the typical TISE January event. The show floor itself was only about a third of its normal size at 200,000 square feet, and according to Informa, exhibitors and attendees were also down by two thirds. Most of the big exhibitors did not attend, with the notable exception of the biggest of them all, Mohawk, which was in its usual space showcasing its broad range of products.

In terms of carpet, Mohawk displayed nylon, PET and SmartStrand (triexta) carpet. The firm has exited the polypropylene market, which has traditionally dominated in Berber constructions, and came out with a Berber look in its EverStrand PET fiber.

On the hard surface side, the firm introduced UltraWood products (composite engineered hardwood) in hickory and white oak, all sliced faces in large formats. Also on display were new RevWood laminate designs, including Cypresta, a white oak visual with a smooth, soft finish. And under the Pergo brand, the firm featured its new Pergo Extreme Preferred products, including Tile Options with a stone visual and a linen embossed surface.

However, when it came to design, the Karastan LVTs stole the show, particularly in its vivid stone visuals, including mixed stone looks in a single tile. Dragon Stone and Basilisk were among the most dramatic.

I4F, one of the three brands focused on floorcovering intellectual property, launched its unique drop-lock system for floating floors back in 2013. One of its core messages this year is an enhancement to that system called iClick4U, a water-resistant, one-piece drop-lock system that improves the water resistance of products like laminate and hardwood by essentially sealing the joints with the locking system.

Another big topic at the I4F booth was digital printing. I4F entered into a patent partnership with Hymmen, a German industrial machinery firm, at the beginning of 2021. The technology allows for high-definition printing with enhanced in-register embossing. It’s a technology that many believe will ultimately supplant the print films used across much of the hard surface flooring market.

Emser was on hand to discuss the partnership between TISE and Jennifer Farrell Designs for Calibu Vineyard, a 7,300-square-foot estate currently in development that will be unveiled over the next year, showcasing trends and elevated design through a range of surface materials. Ceramic tile for both flooring and walls is provided by Emser, including two notable wall tiles, Passion and Mizu. Passion is a glazed porcelain in a subway tile format with a lush abstract organic design, while Mizu, a glazed ceramic, features a design of tightly arranged ovals cut through with a grid. Both come in rich colors.

Emser has developed a virtual tour application on its website, enabling customers to move through the space as they wish, dipping into brochure and product details as needed.

HPS Schönox‘s primary message at Surfaces this year was focused on its Hybrid Active Dry Technology with the newest product in its Hybrid series, HS Sturdy. The patented product can be used for a wide range of applications, from thin coating all the way up to 3” depths. According to Thomas Trissl, principal of HPS Schönox, this simplifies the process with contractors only needing one bag in the van to overcome all the flooring hurdles on the subfloor.

Trissl also reports that the firm’s synthetic gypsum has gained significant marketshare in the multifamily sector. Trissl’s TMT America has also brought Küberit profiles to the U.S. The contouring profiles, which are made in Germany, can be used to transition between any types of flooring and are designed to be bent by hand or with machinery to create any shape through a space.

Karndean came to the show to showcase a range of new resilient products. Notable were two wood looks in its Korlok Select rigid core line (which the firm calls EPC): Braemore Oak is a medium-toned natural visual with a wide range of color; and Glenmore Oak has more of a yellow tint to it. Korlok Select uses Välinge’s 4G click system.

Provenza, a higher-end Canadian based hardwood producer, came to Surfaces with new wood looks as well as SPC introductions. The firm added new oak colors to its Volterra collection of 7-1/2” wide planks up to 6’ in length, and what’s notable about the colors is that each is strong and impactful but with little color movement within.

Also on display were new rigid core products in the firm’s MaxCore SPC line. Then 10” wide products, which run over 7’ long, come in several light and warm colors with clean visuals. The line also includes stone-look SPCs in 18-1/2”x36” formats.

Also at the show was Italy’s Florim with its Milestone U.S. brand of ceramic tile, showcasing its Urban Living line of tone-on-tone porcelain tiles, targeting the commercial side of the market. Rather than focus on graphics and faux looks, the line is all about structure, solid colors and finishes-matte, polished, bush hammered, chiseled and, for walls only, glossy.

Porcelain wall tile is a new offering from the firm, which manufactures its products at its Clarksville, Tennessee facility.

Forbo‘s primary message at the show focused on its three linoleum formats-Marmoleum modular, click and sheet-along with its line of Flotex flooring, with its unique flocked nylon surface and resilient base. Flotex was shown in several stunning designs from animal skins to wood looks to colorful tartans.

Flotex is manufactured at the firm’s facility in the U.K. and shipped to the U.S., where it is printed with the designs. Forbo, which also makes vinyl flooring in a range of constructions for various applications, entry mats, wall base and PVC-free resilient flooring, is headquartered in Switzerland.

Marquis Industries, which has been producing carpet in Georgia for nearly 25 years, largely for the residential market, came to the show with a range of carpet styles as well as hard surface offerings. According to the firm, its strength is in high face-weight PET carpet, though it just introduced its first running-line nylon offering using a cationic nylon 6,6. The new styles are Posh and Breathtaking.

In early 2020, the firm added to its portfolio with the acquisition of Gulistan and Lonesome Oak. Lonesome Oak bought the Gulistan brand in 2017, following Gulistan’s bankruptcy in 2013. Gulistan’s offering, which is higher end than Marquis and includes more patterning, is about 70% PET carpet and 30% nylon 6,6.

Republic Floor, based in Commerce, California, offers a range of LVT products as well as laminates, hardwood and even a private-label carpet line through domestic and international manufacturing partnerships, totaling about 300 SKUs. The firm, which started out as a logistics firm with a fleet of 100 trucks, has been in the flooring business since 2013, shipping direct to customers.

The firm’s most prominent product is its Pure SPC, which uses a stone core. It also offers Pure Grout, featuring ceramic and wood visuals in an SPC with an integrated grout in 12”x24”, 12”x48” and 24”x48” formats.

Phenix, which was acquired by Mannington in early 2020, chose to showcase its products in a space off the show floor. This year, the brand’s primary focus was on its new FloorEver PetPlus line, which uses unbranded nylon 6,6 from Invista as its next generation of high-performance residential carpet, replacing its Stainmaster PetProtect line following the sale of the Stainmaster brand to Lowe’s. The firm intends to add to the line with its SureSoft SDN, a cationic nylon 6.

Also on display was the firm’s LVT program, available for retailers in a waterfall display and including coordinating stair treads, trim and quarter round. Like Phenix’s PET carpet, the LVT products are protected with a Microban anti-microbial treatment.

Software developer RFMS was also at the show, with a team on hand led by CEO Madeleine Bayless to discuss the firm’s new credit card services and Warehouse Mobile app. The credit card services enable real-time payment processing at point of sale, on a mobile device or by a customer web link, posting directly into RFMS, making the entire process easier, faster and more secure.

Warehouse Mobile simplifies common tasks for warehouse workers by providing information for receiving, staging and putting away product, all from a mobile device, and the ability to pick up is currently being added to the app. Warehouse Mobile also offers a dashboard that shows open processes, and the app can be used for scanning roll tags and barcodes, attaching images and notes, and much more.