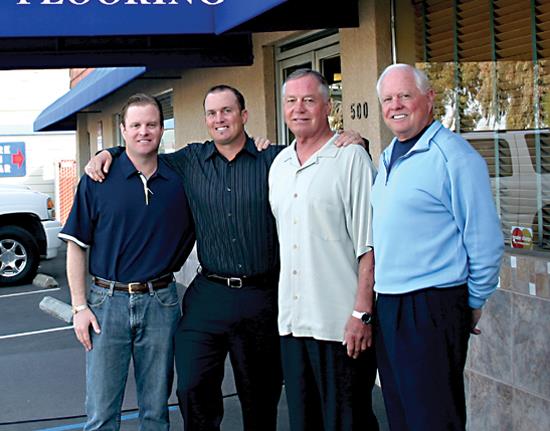 In the same way that Todd is committed to family, he is also committed to community. Todd credits much of Wheeler’s Flooring’s success to his family’s longstanding relationship with the Salinas, California residents, both through simply living long-term in the area and through active civic support. In fact, according to Todd, an astounding 99% of his business comes from referrals, which makes it fairly clear that the community loves Wheeler’s as much as Wheeler’s loves the community.

THE WHEELER'S BRAND
It doesn’t hurt that Todd’s personality is as big as they come. He is lively, talkative, engaged and authentic. He wears his emotions on his sleeve. He says what he thinks. And in a retail business that can often seem opaque and complicated to customers, his personality is no doubt a benefit, as it sets those around him instantly at ease.

In addition, with regard to community involvement, Todd checks all the right boxes. He’s been a Rotary member for 15 years. He is involved in his church, and he’s willing to give a lot to get a bit of return, especially to the local students.

For instance, this fall Wheeler’s Flooring will provide every student at Loma Vista Elementary School—600 kids in total—with a backpack of school supplies branded with the Wheeler’s name. The business also sponsors golf tournaments for local high schools.

With regard to traditional advertising mediums, Wheeler’s just re-entered television advertising after a several-year hiatus. The company hired a professional through the Hearst Television Corporation to write a jingle about Wheeler’s to accompany the commercial. The jingle is sung by Todd’s daughter Allison, a jazz vocal major. The company also has a blog and profiles on Facebook, Houzz and Twitter.

Lastly, all of Wheeler’s trucks carry the company name, and the business’ installers—Todd estimates that he typically has ten crews of three to four installers in the field daily—wear Wheeler’s shirts on the job.

Says Todd, ”Being able to install a product properly the first time is what sets Wheeler’s apart. We aren’t money hungry. We’re community-driven, lifers in this community. My mom always told me to keep my nose clean. And I still do. I can go anywhere in the area, and I don’t have to duck and hide, because if a problem arises, we fix it.”

PARTNERING WITH COSTCO
In the 1990s, Wheeler’s was asked if it would be interested in serving as the installer for flooring products sold through local Costco stores. Todd declined, saying that he wasn’t interested unless he could provide both the goods and services.

Years later, he was approached by a Shaw representative—Shaw serves as Costco’s manufacturer partner in the program, and Wheeler’s is a Shaw Flooring Gallery—who asked him again if he’d like to be involved. This time, Todd saw the appeal of having an arm of the business that would require no advertising and minimal investment. In spring 2013, Wheeler’s was awarded three local Costco warehouses.

Todd hired an employee specifically to handle Costco lead generation. The woman takes her samples into the Costco store, in a sort of road show format, and discusses the Shaw special order program with interested shoppers.

Following that exchange, a second Wheeler’s employee calls interested parties to discuss their needs, then sets up an in-home consultation. Flooring leads generated on the Costco website go directly to Wheeler’s.

“It’s a good deal for the member,” says Todd. “They receive a cash-back card from Costco that incentivizes them to buy through the program, and they know that if anything goes wrong, Costco will fix or replace it.”

The Costco business now accounts for about 5% of Wheeler’s bottom line, and Todd would like to increase that to 10%. He believes that the channel also gets him in front of shoppers who might not otherwise be Wheeler’s customers, a significant boon.

BETTING ON THE COME
When asked what keeps him up at night, Todd says simply that it’s the knowledge of not having the time to complete everything that he wants to do. Todd sees this as a fortunate turn of events, as during the recession his answer would have been quite different. “In 2008 and ’09, I was thinking, ‘How am I going to pay my bills?’ During the recession, we didn’t want to lose any of our employees, so Dad and I lowered inventory, cut the fat. We figured, we’ll drive the same cars for a while, ride through this. We hoped it would break in a year or two, but it didn’t. 2010 was horrible. 2011 was a little better, but in 2012, it was slower again. In 2013, not as much pent-up demand broke as expected. By 2014, I had no expectations. But this year, at the Shaw convention in Orlando, I bet on the come. I bought higher end goods, invested in inventory and new displays. And it’s working.”

While it’s obvious that Todd has the entrepreneur bug, he isn’t focused on expansion for its own sake. Rather, Todd wants to keep a good thing going, to sustain the business that he has. “We have all 52 cards in this deck. There are no other businesses for us. We’ll do it until it’s no longer fun. Growth is not in my DNA. Why? I’m happy, and everyone around me is, too. I want to have a nice life and go home each night to my darling, sweetheart wife. We aren’t in it to get rich quick.”