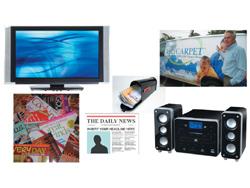 Building store traffic with advertising dollars is potentially one of the most rewarding and frustrating challenges you will face. There’s really no formula you can follow that will guarantee success, but it’s a certainty that you have to get the word out about your products and services and let shoppers know how you can do the job better than anyone else.

Even the small market retailer, with no direct competition in town, needs to advertise because then they’re competing with the furniture or home electronics store for discretionary spending.

“There is no magic formula on where or what to advertise,” says Steve Wheeler of Great Floors, a $115 million retailer based in Idaho. “It is often a trial-and-error challenge.” It’s also about getting a message out to the market on a regular basis. Sporadic advertising rarely works.

Of course, established, successful retailers will often say that word of mouth is the best advertising they have, but that’s not something you can buy—it’s something you earn by actually doing the job better than anyone else. How you and your employees perform your jobs can be the best, or worst, advertising your business will ever receive. And it can blunt the effectiveness of the advertising you spend your money on if you can’t perform at a high level.

“Customer service is the best advertising we can do,” says Steve Pulsipher of R.C. Willey, a Berkshire Hathaway owned chain. “We err on the side of generosity. The mill may say no, but we will say yes. And if we do that, we’ve got a customer for life.”

Advertising in the flooring industry can be a tricky business. Pulsipher considers the average flooring sale—from the time a shopper begins thinking about a flooring upgrade to the time the flooring is installed—to be about nine months. So, for example, an image ad early in that process is likely to be as important in the decision as a free-installation offer later on that the customer takes advantage of.

There are several components to a formal advertising program. You have to determine how much money to spend and what media to use, and you have to create effective advertisements. And once you accomplish those tasks, you need to figure out what worked and what didn’t, which may be the most difficult part of all.

Coming up with an advertising budget isn’t necessarily a science, but a common rule of thumb is to spend roughly 3% to 5% of anticipated annual sales. That’s the ballpark that R.C. Willey and Great Floors play in, as does the successful Nebraska Furniture Mart, which is at the high end of that range. However, the one downside to this formula is as sales go down—so does ad spending, and down times are when advertising is needed the most. If your business is relatively young and unknown, it may pay to spend much more. If your business is well established and you get a lot of repeat and referral business, maybe you can spend much less. Your advertising budget, to some extent, will be determined by how much it costs to advertise in your market.

“In a down market, we usually increase marketshare,” Pulsipher says of his advertising budget. “While the competition might hunker down, we don’t.”

Figuring out exactly where to advertise isn’t cut and dried, either. However, the savvy players often use most or all media in their market, which includes television, radio, Internet (including e-mail), newspapers, and direct mail, and they use messages in each medium to reinforce the others.

David Elyachar, founder of Big Bob’s New & Used Carpet, likes TV but he says that the Internet is going to play a much bigger role for his organization beginning next year. However, his franchisees use a variety of media, and Elyachar believes that after the economy recovers a new mix strategy may be warranted.

Great Floors uses different media for different reasons, but all the ads have a common look and feel. “Advertising is an integral segment of our marketing strategies,” says Wheeler of Great Floors. “It is an ever changing target. We have some basic rules we try to employ… newsprint for harder sell promotions, such as free pad or Santa sale, while electronic is more image and softer sell.”

R.C. Willey puts about 30% of its budget into television, about 10% into radio, and most of the rest into newspaper advertising inserts and direct mail. Great Floors puts a much higher percentage into television and less into the others. “The best media plan is utilizing a mix of electronic and print to reinforce one another,” Wheeler says. “Our move from print to electronic media is based on two factors—the circulation drop by the newspapers in the major markets we serve, and feedback from our store managers and their sales pros.”

R.C. Willey and Great Floors have more money to spend than the average flooring store, and they make good use of it, especially for television. Both businesses have hired professional spokespeople, which is probably out of the question for many smaller retailers. R.C. Willey has a deal with Paige Davis, star of the cable program Trading Spaces. Great Floors has used the same (but not famous) spokeswoman for a number of years. Their advertising appears on the various cable TV shows dedicated to home design and renovation.

Great Floors uses 15 second television spots to build its image by touting things like its low price guarantee and its line of green products. R.C. Willey also uses Davis as an image builder and, for example, she reinforces the company slogan, “Your Home, Your Way” and talks about designing on a budget.

“The reason we like TV is easy—it drives traffic to our stores,” Wheeler says.

Many businesses like print advertising, in particular inserting flyers into local newspapers. This provides a lot of flexibility although the ads may be ignored if they get lumped in with a whole bunch of other inserts. Newspapers will always push what’s called run of press advertising, which is nothing more than advertising that’s printed on an actual page of the newspaper. This kind of advertising costs substantially more than an insert—depending on the size of the insert—but it can also get far more readership if it appears in the right section. This can also be effective in local weekly newspapers, which have some of the highest and most avid readership in the industry. As Wheeler suggested, readership for many daily newspapers is falling as the Internet continues to grow.

Wheeler focuses his newspaper advertising around the weekends, when many sales occur.

Print advertising also includes direct mail. This is generally used for hard sale rather than image building and, like newspaper advertising, will have a specific promotional offer. It also allows for a very targeted campaign, if you can get the right mailing list. R.C. Willey, for example, will send a Stainmaster promotion addressed directly to women, using “Jane Smith” rather than “Mrs. Smith.” “A man will just throw it away,” Pulsipher says.

Both R.C. Willey and Great Floors are working to establish a more robust web presence. Great Floors has used its website strictly for educational purposes but that is about to change and the firm plans to begin selling online. R.C. Willey has just started using a database of 120,000 opt-in email addresses to target its product offers. So far, Pulsipher says, some email promotions have seen the “open” rate as high as 50%. In other words, more than half of emails sent are being opened. This kind of email strategy is within reach of most businesses. The hard part is collecting and managing the addresses of people who walk into the store, or through a feature on the store website.

Deciding what to advertise is another area for experimentation. Both Pulsipher and Wheeler say that some of their most successful promotions revolve around their most recognized brand names, in particular Stainmaster and Karastan. Beyond those names, and a couple of others (which often have ready-made advertising available for retailers), most brands are fairly generic in the minds of consumers, they say. So the best thing to do is find ways to promote their own businesses. For R.C. Willey, that could mean offering a free TV with the purchase of $2,000 in carpet or a vacuum cleaner with a $1,000 purchase, which helps reinforce the idea that R.C. Willey is the place to shop for all kinds of home furnishings, from carpet to electronics.

With diligent follow-up with customers, you can often get an idea of what kind of advertising works best, but even that’s just a guideline because customers’ memories are often faulty. This kind of information needs to be collected at various stages of the sales process, as well as long after the sale.

“Advertising is the lifeblood of the business,” Pulsipher says. “No risk, no glory.”