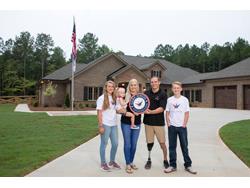 Sergeant Hunter joined the military at age 22, and was first deployed in 2010 to Iraq. During his second deployment, in Southern Helmand Province, Afghanistan, Sergeant Hunter was on a dismounted patrol with his unit when he stepped on an improvised explosive device (IED). The bomb took his right leg, and shattered his left, along with many other injuries.

“After being transported to three different hospitals following his injury, Sergeant Hunter spent four years at Walter Reed National Medical Center,” says NWFA President and CEO, Michael Martin. “He has endured 61 surgeries so far, and the possibility exists that there will be even more in the future. His determination to overcome his physical injuries is inspirational. We are honored to partner with Mullican, JJ Haines, and DriTac to provide flooring for his new home.”

In addition to the 33 homes already completed, NWFA currently is working with its members to source wood flooring for 17 additional R.I.S.E. homes in various stages of planning and construction. Currently, 56 NWFA member companies have donated product, logistics, and installation services in locations throughout the United States, with a total value of more than $4.0 million.

By the end of this year, 68 specially adapted smart homes will be completed or underway through the Gary Sinise Foundation R.I.S.E. program.