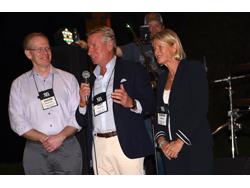 The meeting started with a full-day meeting of the membership followed by a dinner party at the ruins that included cocktails, dinner, live music and dancing.

Approximately 180 people are in attendance at the first major flooring event since the pandemic.

Piet and Sabine Dossche were honored during the dinner, and Piet reminded the group from the stage that while he had retired from his day-to-day role at Shaw Industries, he was not retiring from the industry. Dossche said, “I’m still very much involved with Shaw…just not operationally."

In his remarks, he told the group that as the top flooring retailers in the country, “You have an obligation to lead in this industry. We want to do well, be successful, create a living for ourselves and have a sustainable, good industry.” He congratulated the NFA for its teamwork with each other and the suppliers to the industry.

Julian Saul, who retired from Shaw Industries as president, owns Barnsley Resort and also attended last nights event. Saul said he was delighted to be with all his friends from the industry and noted that this was one of the first major event held at Barnsley in a year.

The NFA, formed in 1981, is comprised of successful flooring retailers across the U.S. New members are required to be a leader in their particular markets with sales of $10,000,000 or more and must be recognized by both manufacturers and other dealers as a company with a track record of high integrity. Additionally, any new prospective NFA member must have 100% approval for inclusion in the group from every existing member. Jason McSwain of McSwain Flooring is the current president.

The meeting runs through Wednesday morning. More pictures of the event are available under Recent Industry Events, here.