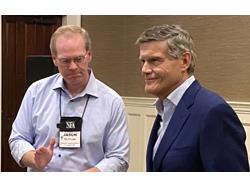 Adairsville, GA, April 21, 2021-On the final night of the National Flooring Alliance (NFA) Spring Meeting, Jason McSwain, president of the NFA, called Vance Bell to the stage to honor him as he retires as CEO of Shaw Industries.

In acknowledging the recognition, Vance said: “This is really meaningful coming from customers and friends like you.”

As part of his remarks, Vance told a story of Jason’s father, Ron McSwain, taking him to get deep dish pizza at one of his first Chicago markets when Vance was in his late ’20s, “forming one of first real retailer relationships,” and Ron and Vance continued that relationship, helping each other throughout their careers. He added that Ron helped to set a perception for the quality of the character of the people in the industry.

To add humor last night, Vance said it was ironic that, "Ron helped him begin and start my career, and Jason is helping me end it.”

Vance closed by saying, “The NFA is a class act, and we are all tethered together in terms of our collective success. I appreciate your professionalism and the way you represent flooring in your community and with consumers.”

In our one-on-one with Vance Bell, he discussed his shift from CEO to chairman.