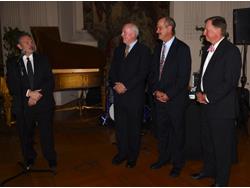 Newport, RI, October 19, 2017-Last night, as part of its fall meeting, the NFA held a dinner at the Rosecliff Mansion in Newport, Rhode Island, honoring three individuals who will retire at year’s end: John Godwin, Paul Comiskey and Randy Merritt.

Godwin is senior vice president with Shaw Industries; Comiskey is president, residential business for the Dixie Group; and Merritt is president of Shaw.

Each of these flooring industry legends spoke at the event, where a dinner was also held.

The Rosecliff Mansion is the site where the 1974 version of The Great Gatsby was filmed.