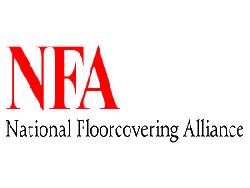 Maui, Hawaii, Oct. 2, 2014 -- The National Floorcovering Alliance (NFA) met this week in Maui, Hawaii for its annual fall meeting and elected a new slate of officers who will take office beginning in 2015.

Dave Snedeker was elected president. He is the division merchandise manager over Floorcovering for Nebraska Furniture Mart.

Jason McSwain was elected vice president. He is the president of McSwain Carpets and Floors, a 10-store chain of flooring stores based in Cincinnati.

Jim Walters was elected treasurer. He is a partner with Macco’s Flooring and is also past chairman of the World Floor Covering Association. Macco’s is a chain of independent floorcovering stores in Wisconsin and the west coast of Florida.

Kelly Taylor was elected secretary. Kelly is a relatively new member to the NFA and is the owner of Ambassador Floor Company who, in addition to operating several flooring stores in the St Louis area, is also a major player in the synthetic turf business.

The NFA is a group of approximately 40 floorcovering retailers who must have a minimum of $10 million in flooring sales to be considered for membership.

Listen to the interview with Sam Roberts from the meeting in Hawaii here.