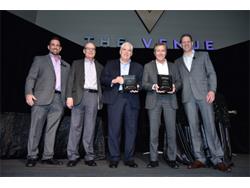 Norwalk, CT, January 29, 2019--Metroflor Corporation acknowledged the outstanding sales performance of its distribution partners in 2018 by bestowing its annual performance awards at a magic-themed celebration during The International Surface Event (TISE) in Las Vegas. At a private venue, Metroflor’s sales team wined and dined its distributors, with the awards followed by a performance by noted illusionist Rob Lake, who worked his sleight of hand to the amazement of the group.

Once again, Tri-West, Ltd. led the pack with a total of four, and Ohio Valley Flooring received two awards. The Visionary Award to Ohio’s Mike Spivey, who best embraced Metroflor’s brands and products and pioneered local marketing programs resulting in greater revenue and shared growth, not only in 2018 but over time.

Following is a complete listing of all the Metroflor distributor award winners: