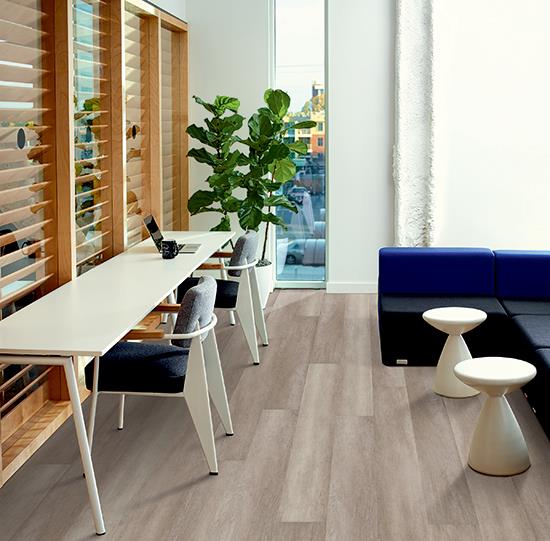 The term mainstreet denotes the business of supplying independently owned commercial operations-restaurants, offices, non-chain retail stores, etc.-with flooring sourced from and installed by residential retailers, and with the flooring generally coming from a dedicated mainstreet product line. In these transactions, typically the buyer is a small business that either owns or rents the space requiring flooring. The buyer does the research and makes the final decision on the flooring, and as occasional shoppers, floorcovering is outside their realm of expertise. As such, it falls on the flooring retailers to educate them on design as well as product maintenance, performance and lifecycle.

To shed some light on the current state of the mainstreet commercial market, Floor Focus reached out to Todd and Brett Wheeler, owners of Wheeler’s Flooring in Salinas, California; Bo Perkins, sales manager of Broadway Carpets in Knoxville, Tennessee; John Taylor, owner of Taylor Carpet One Floor & Home in Fort Myers, Florida; and Tim Browning, co-owner of Carpet Spectrum in Memphis, Tennessee.

We install mainstreet products in attorney’s offices, retail stores, car dealerships and medical facilities. Negotiated commercial tends to be much bigger projects-competitive, lower margins; we do a little bit of that but not much. We prefer mainstreet.

T. Wheeler: We started as mostly retail nearly 40 years ago. Philadelphia was the only commercial product [Shaw] had at that time. It has been our number one, go-to mainstreet product. But we’ve evolved beyond mainstreet into specifiable jobs. Philadelphia is still the anchor, and that has to do with Shaw’s service, availability and pricing.

[Our mainstreet products] are going into retail spaces, boutiques and hospitals (LVP), and all school districts in Monterrey County, where we are located.

Perkins: The company has been in business for 40 years, and I’ve been with them for 14 years. As far as us getting started in mainstreet, I’m sure a lot is just the area we are in. Knoxville is very diverse in terms of small businesses.

We work mostly in churches, offices, schools, hospitals, some government housing, retail and local hotels-the few that remain. But the schools, hospitals and government housing oftentimes have specified products. For those, there are three bids and the lowest bidder gets them. Your smaller local hotels want to buy from you, while the larger franchises deal with the specifier community or in some cases, manufacturers sell direct to them.

Browning: Our mainstreet business started with the Mohawk Color Center. We moved into Pentz five years ago, and it’s been a positive change. As far as keeping prices low and competitive, Pentz has been good for the market because commercial carpet was going through the roof with Shaw and Mohawk and others. Mohawk and Shaw make good products, and we still buy some of those products, but Pentz has brought the game up regarding modular carpet tile-the tabbing of the carpet as opposed to gluing down. Ten years ago, if you had asked me about putting tabs on carpet, I’d have said: No, we’re gluing everything down. The tabs are a revolutionary product; installers are spending less time on the jobsite and customers no longer have to deal with the smell from the adhesive.

We install mainstreet products primarily in office buildings. But we also have the contract on all the Memphis libraries. We have a fire rating and ounce weight we are required to meet as well as a color line we must stay within. They never said it had to be a mainstreet product. We put two products in front of them-an Aladdin product and a Pentz product. From there, they went to the board of directors and showed them the samples. They went with the Aladdin product.

Q: How have mainstreet products evolved over the last five years?
Taylor: While there is still a lot of carpet being sold in mainstreet, hard surface is a growing trend. Some of that is due to sound issues; but some is due to preference. Currently, the two products used most are carpet tile and LVP (luxury vinyl plank).

B. Wheeler: In the past five years, maybe even seven, the big change has been going from broadloom commercial carpet to carpet tiles. That shift has been because the price of carpet tile has come down over the last ten years, and installing carpet tile in commercial applications is so much more efficient than utilizing commercial broadloom carpet.

The hard surface side of Philadelphia Mainstreet is one of our bigger lines, but there are so many lines out there in the commercial environment for hard surface. The line has just grown in the past few years to offer a 20mil SPC. I think moving forward we’ll see more utilization of Philadelphia’s hard surface.

Perkins: Carpet tile has been big and still is a good concept from a cost standpoint. The practicality of it-you can pull one up and replace it-is always going to be desirable. There’s not as much broadloom out there like there used to be. Right now, it’s either carpet tile or hard surface.

Browning: LVP is the new norm in mainstreet products. Mainstreet has done a good job in one regard-by pairing a carpet product with an LVP.

Q: Has the business changed in ways you didn’t foresee?
Taylor: The biggest change we didn’t see coming was the increase in luxury vinyl products. For many years, we carried those products, but they were more money than the consumer wanted to spend. Now, they’re the standard. Prices have changed a little bit but not really that much. People don’t seem to have a problem spending a little more per square foot to get something that will last longer.

B. Wheeler: Five years ago, I didn’t see how much floating floor would be utilized today. At that time, the rule for us in a commercial environment was to glue down a 20mil LVP. There’s no movement with that product, and it wore a lot better [than click flooring] under heavy and rolling loads like hospital beds. But with the introduction of SPC, we’re seeing a shift to floating floors rather than glue-down.

The hard surface that was put in seven years ago in heavy commercial environments is still not up for replacement. So, long term, end users are putting in more hard surfaces, and carpet is being displaced in the heavy traffic areas. You’re seeing a lot more LVPs than carpet tile.

Perkins: When the industry first started floating plastic or vinyl floors, I thought, we don’t need to do that. And now, if you don’t do it, you don’t stay in business. The speed with which LVP has taken off is mind-blowing. It’s fashion-driven; color and style are what people want.

Q: How have changes within the category impacted your sales and margins?
Taylor: LVP products are the hottest thing, so in those categories, our sales have gone through the roof-double-digit increases for the last few years. Our margins are pretty stable on those products. I wouldn’t say we’ve gone backwards, but on hard surface, the margins are typically less than on soft surface. In mainstreet commercial, you tend to have a little more flexibility on margin. It’s not as competitive as bid work.

Perkins: Luxury vinyl kills your margins. Consumers or end users are uneducated on it. They want a specific mil thickness but don’t care about finish or other aspects. They don’t know what to ask for. They don’t ask: What kind of protection is on this or what’s in the finish on this product? We try to set ourselves apart from the big boxes and large retailers by working to educate our customers on what they’re getting and putting down.

B. Wheeler: We experienced 20% growth for 2019. Our tickets are higher due to carpet tile and broadloom.

Perkins: I have not received those final numbers yet, but I am going to guess that our mainstreet commercial business grew anywhere from 8.5% to 10.5%.

Browning: I’d say 25% to 30% growth. When Engineered Floors incorporated the Pentz name into mainstreet, that boosted it.

Q: What changes to the mainstreet commercial offerings would you like to see?
B. Wheeler: Concerning the click SPC flooring that is just now entering the market, we need a bigger line. There needs to be more education on LVPs and waterproof floors and how they are advertised to the end user, specifically when it comes to situations involving water penetration. The concern is overemphasizing the warranties and not backing up the claims.

Taylor: Manufacturers are doing a good job covering the spectrum of needs that are out there for commercial jobs.

Browning: I’m a nylon fan. If I were to say anything at any board of director’s meeting with [the flooring manufacturers], I’d ask this: Is there a way to get away from the polyesters and olefins? I’d like to see more nylon come out in those commercial products-26oz, 28oz, 30oz. Nylon is a better-wearing product in high traffic. It’s hard to look someone in the eye and say, this polyester is going to do well in your traffic lane-even with the tight woven 28oz, while knowing that is not the case.

Perkins: We have a really good offering. Manufacturers are doing a good job of keeping up with style and color, and I think designers would tell you the same thing.

Q: How do you see the category evolving over the next five years?
Taylor: I don’t know if it’s going to be better or worse, but I think it’s going to be tough. So 2020, at least until the election, which is the bulk of the year, will be somewhat flat. A lot depends on what the outcome of it is, but after that I would expect [the category] to grow again, which would be a good thing for all of us.

B. Wheeler: I see that hard surface is going to still take marketshare from commercial carpet. I see broadloom carpet staying even, but I think hard surface, in the next five years, will be even bigger.