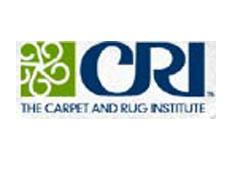 The Smrekar award was established by Milliken & Company to honor the late Dr. Joe Smrekar who served on a number of CRI committees and "set the standard" for service to CRI and the carpet industry. .

Foye has in prior years been active on the CRI Government Issues Committee and is the current chairman of the EPR/CARE Panel, which works to identify and address Extended Producer Responsibility legislation that could impact CRI members. The EPR/CARE Panel also ensures that industry objectives are in favorable alignment to CARE.

In other business, outgoing CRI board chairman John Wells offered remarks on the current state of CRI, including the carpet manufacturing trade association's 2012 restructuring process as well as the organization's move into an historic building in downtown Dalton and away from the headquarters building it had occupied since 1971.

Newly-elected members to the CRI Board of Directors were announced and an outgoing member was recognized.