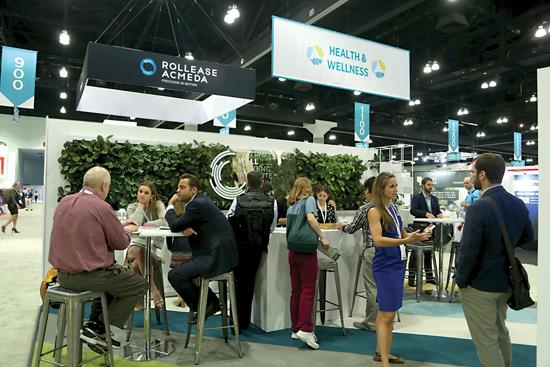 This year’s Greenbuild expo, held at the Los Angeles Convention Center in early October, saw a changing of the guard at the U.S. Green Building Council (USGBC), with the departure of CEO Rick Fedrizzi, who is also a founder of the USGBC, replaced by COO Mahesh Ramanujam.

Because of the West Coast location of this year’s event, named Iconic Green, high attendance was not expected, but it turned out fairly strong, with final attendance figures of 18,079 down less than 5% from the 2015 Washington, D.C. event. And 531 exhibitors took up nearly 140,000 square feet of exhibit space. In addition to exhibits and demonstrations from product manufacturers, associations and educators, Greenbuild 2016 offered a compelling range of education sessions, most of which were heavily attended. In all, over 33,500 hours of continuing education credits were earned at the show.

Speakers at the opening Greenbuild plenary included George Bandy, Rick Fedrizzi, California lieutenant governor Gavin Newsom and Los Angeles mayor Eric Garcetti, but the night went to plenary speaker Sebastian Junger, a journalist and author. Junger’s speech was captivating and memorable, drawing on historical references and personal anecdotes to make a case for not only the urgency of the climate change crisis, but also for humanity’s ability to step up and effect change when things are at their worst, noting that “the worse things get, the better human beings act.”

The closing plenary, featuring remarks by incoming USGBC CEO Ramanujam, centered on a presentation by Bjarke Ingels, a Danish architect who has risen to prominence for his manmade ecosystem philosophy, which he expounded on with humor and insight.

A handful of flooring companies exhibited at the show, including the big three—Interface, Shaw and Mohawk. However, it was held at the same time as the IFMA (International Facility Management Association) show in San Diego, which drew away several flooring producers, including Tarkett, Invista, Milliken, Patcraft and even Forbo, which has had a prominent presence at Greenbuild for years. Tarkett didn’t exhibit at Greenbuild, but it did participate in a timely education session, Let’s Talk About PVC. The panel included EPEA founder Michael Braungart; Wes Sullens, green building manager at StopWaste; Bill Walsh, executive director of Healthy Building Network; and Anne-Christine Ayed, executive vice president of research, innovation and environment at Tarkett.

The panel offered a wide-ranging and passionate discussion about critical aspects of PVC, with Braungart making a case for a pragmatic approach. He advocates using PVC in long lasting products, like window profiles, flooring and piping, with recycling to keep the material in the technical cycle. Braungart also believes that PVC is one of the most effective ways of sequestering the chlorine released through the production of sodium hydroxide, also known as caustic soda or lye. Over 60 million tons of caustic soda are produced globally every year for use in a range of industrial processes.

FLOORING HIGHLIGHTS
Mohawk, a top sponsor of this year’s Greenbuild, exhibited on the show floor across from the International Living Future Institute, with whom it partners on a range of sustainability programs and initiatives, including its Declare labels. The transparency engendered by Declare labels and other tools is central to Mohawk’s environmental philosophy.

On hand to discuss the firm’s sustainability strategies was George Bandy, vice president of sustainability. Bandy joined Mohawk in mid-summer after 16 years in sustainability at Interface. However, he is quick to point out how different the companies are, and consequently how different his challenges will be. For one, Mohawk, the largest flooring firm in the world, is an acquisition-based company, and with every acquisition comes the staggering task of measuring and assessing sustainability and assimilating the new firm into Mohawk’s environmental programs. He was also upfront about the need to create within the firm a culture of communication to get out its environmental message.

Shaw was also at the show, talking about its Cradle to Cradle commitment and its focus on material health. Not only does the firm have Cradle to Cradle certifications on the commercial side, but it is doing the same on the residential side, despite lukewarm demand from the homeowner segment. So far, the firm has Cradle to Cradle certifications for its nylon 6 carpet and all of its hardwood, and now it’s working on laminates and polyester carpet. The firm believes that in the residential market, the builders will be the drivers for sustainable development, as designers have been in the commercial market.

Shaw’s booth, centrally located just inside the main entrance to the show floor in a stripped down design, centered on two large TV screens running videos focusing more on the firm’s organization and culture than on product specifically. On the afternoon of the first day, Bill McDonough, one of the most recognizable leaders of the sustainable development movement, was on hand to talk about the first Cradle to Cradle flooring in the world, Shaw’s A Walk in the Garden, relaunched at the show in new colorways and sizes. A couple of long tables arrayed across the booth between the screens focused on key initiatives the firm supports, from LEED v4 and the Well Building Standard to Google’s Portico and Mindful Materials, a design industry initiative focused on communicating transparency.

Interface’s booth focused on introducing its new Green-Circle Certified environmental labels for its GlasBac and GlasBacRE carpet tiles using nylon 6 and nylon 6,6, products, which together account for 97% of what the firm has made and sold in the U.S. market so far this year. The label, which is the size of a bookmark and looks a lot like food nutrition labels, neatly details the product’s environmental profile through three categories of information: product specific, manufacturing specific and material ingredient reporting certification.

The firm reports that it is the first flooring manufacturer to receive this third party certification, which includes such metrics as recycled content percentages, carbon footprint, renewable energy, material ingredients, water use reductions, waste and waste diversion, energy usage reduction, and all related certifications. Green Circle is also part of a pilot program with the Department of Defense that uses the labels to connect manufacturers with federal purchasers.

Interface environmental experts were also on hand to discuss the firm’s new Mission: Climate Take Back, which seeks to drive restorative manufacturing, including working with the Biomimicry Institute on creating factories that work like forests to create a positive impact on the environment. A key part of the new mission is to share its strategies to help usher in a new era of progressive industrial manufacturing.

Nora, the rubber flooring manufacturer, also had a presence at the show, repeating its role as the featured flooring in Building Design + Construction magazine’s GreenZone demonstration building. Following the show, the building was donated to the YouthBuild Charter School of California, which has 19 locations across the state.

According to the firm, Nora was the first resilient flooring producer to publish an EPD, which was developed using European product category rules (PCRs), and it updated the EPD a few months ago using the North American PCRs. And led by Tim Cole, the firm’s vice president of marketing and a well established sustainability expert, the firm is developing a brand new sustainability strategy, currently in the draft stage. Cole also highlighted Nora NTX, a pre-applied adhesive that not only reduces adhesive use but also virtually eliminates down time—which is particularly important for Nora’s strongest market, healthcare.

New to Greenbuild this year was Graf Brothers Flooring, which produces solid and engineered hardwood in its Ohio factory using lumber harvested within a 400 mile radius. The firm, which has a sawmill in neighboring Kentucky, specializes in rift and quarter sawn hardwood.

The National Wood Flooring Association, which has had a presence at the show since 2012, was on hand to talk with people about hardwood applications and LEED, among other topics. The NWFA, which is heavily involved in training and education, launched its NWFA University this summer and it is off to a strong start, with 4,000 courses completed over a 12-week period.

WE Cork, another loyal Greenbuild exhibitor, showcased the latest in cork design, including its high definition printing technology that can be used to create just about any visual on a cork surface. Its 14 SKU Serenity line uses the technology to create 12 wood looks and two stone looks.
Tate Access Floors showcased its access floor finishes, a system that enables the firm to take product from any flooring producer and adhere it to its panels, using adhesives designed to work with the different hard surface flooring categories, from porcelain and terrazzo to hardwood, linoleum, rubber and vinyl products.

LOOKING AHEAD
Next year’s Greenbuild International Conference and Expo will take place in Boston, Massachusetts, November 8 to 10, at the Boston Convention and Exhibition Center. The 2017 expo will partner with 360 Live Media to conduct an indepth show evaluation and industry survey, whose results will be used to add features and “engagement areas” to the show floor, and to enhance contact between attendees and exhibitors, according to Informa Exhibitions, which owns the show. Informa also owns several other shows, including the International Surface Event (TISE), coming up in mid-January. Early rates for Greenbuild 2017 exhibit spaces are available through December 2.