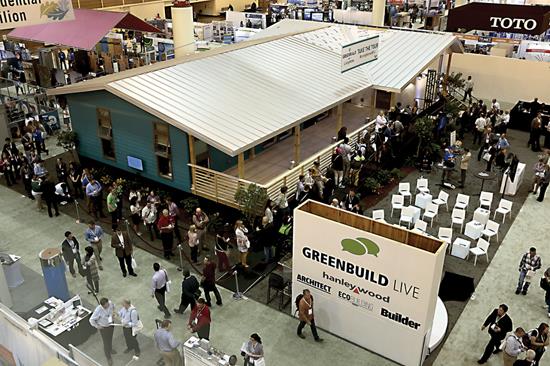 This year’s Greenbuild Conference and Expo was held in New Orleans’s Morial Convention Center, October 22 to 24. And this time around, the host city had a more visible presence at the show than in years past, largely due to the U.S. Green Building Council’s strong bonds with the city, developed in the aftermath of the devastating hurricane in 2005.

At Greenbuild 2005, held in Atlanta two months after Hurricane Katrina hit, experts from around the country in engineering, architecture, urban planning and water management—160 participants in all—gathered with local stakeholders for an intensive meeting on Gulf Coast reconstruction. The charrette resulted in the New Orleans Principles, guidelines for restoring the city and its environs while sustaining its culture and diversity, with strategies for long-term sustainable growth and a strong economy driven by locally owned businesses.

Next year’s Greenbuild will be held in Washington, D.C. in late November. At New Orleans, 325 exhibitors signed up for next year’s show, with 100,000 square feet already contracted.

CONVENTION HIGHLIGHTS
The Morial Convention Center, located alongside the Mississippi River at the edge of the Warehouse Art District, was an ideal venue for the expo, with hotels lined up across the boulevard, and the French District a short walk away—for attendees looking to take in the flavor of this unique city.

Within the convention halls, the largest collection of sustainability experts in the world, including many of the original visionaries and founders of the movement, traded knowledge in the conferences and seminars that comprise the show’s massive education program, and they walked the show floor to see firsthand what today’s manufacturers are doing to drive sustainability in the built environment.

David Gottfried, who founded the USGBC in 1993 with Michael Italiano and Rick Fedrizzi, was circulating among the booths, signing copies of his book, Explosion Green, and recounting to listeners the story of his personal journey. Gottfried also founded the World Green Building Council.

The opening session included a day-long Materials and Human Health Summit, presented by Bill McDonough, addressing new LEED v4 credits on transparency, disclosure and optimization, and delving into issues of human health and exposure. McDonough emphasized the need to not just disclose materials and be transparent about health risks but also to develop materials that have no such risks.

This year’s Greenbuild also featured the Net Zero Zone, marking the first time a conference and expo has offered exhibitors booths that are entirely powered by onsite alternate energy generation and distribution, according to the USGBC. The Net Zero Zone included a networking lounge on the second level, an outdoor display and the Net Zero Pavilion, where several exhibitors showcased their products and services. The project was created in partnership with Emerge Alliance, a nonprofit open network of 90 or so organizations that is reinventing how electricity is generated and used in buildings.

On the show floor was the 2014 Greenbuild LivingHome, designed by LivingHomes and Make It Right, and built as a LEED Platinum net-zero home, featuring Shaw Fired Hickory glazed porcelain tile in the master bedroom and American Restoration from Shaw’s Epic line in the living room. After the show, it was moved to the Lower 9th Ward as a home for a local resident.

Rick Fedrizzi, CEO of USGBC, addressed conference attendees at the opening plenary, held in the renovated Superdome, following an introductory speech by New Orleans mayor Mitch Landrieu, who discussed, among other things, reconstruction developments in the city and the work of Make It Right, which builds sustainable homes for people in need. In his speech, Fedrizzi went over new developments, achievements and milestones before introducing one of the most important leaders in the green movement, Paul Hawken. Hawken, in turn, moderated a discussion with Martin O’Malley, governor of Maryland, and Tom Steyer, an investor and philanthropist, that left many in the audience bemused—they had come to hear Hawken and his insights into sustainability, not a politician and a businessman. The event also featured musical performances by Ivan Neville (son of Aaron), Alabama Shakes and Trombone Shorty.

Fedrizzi also spoke about working more closely with other green organizations, like the Green Building Challenge, as opposed to operating like “armed camps.” And he introduced the new LEED Dynamic Plaque, developed in partnership with Honeywell, that is designed to measure and provide near-real-time performance feedback to help optimize facility operations.

One clear trend in green building and in the development of LEED is the growing international presence. At this year’s show, there was a Bavarian pavilion, a trade commission from Malaysia, a Government of Alberta booth, representatives from Singapore and Austria, and a Quebec pavilion.

The USGBC also extended the date for LEED 2009 registration. Originally, projects were allowed to register using the old standard through June 2015, which was already more than twice as long as the registration window allowed for previous versions. Now that window has been extended all the way to October 2016. According to Fedrizzi, “The market has requested additional time to prepare for LEED v4, so we are responding.”

ON THE SHOW FLOOR
While last year’s Greenbuild, held in Philadelphia, brought renewed momentum to the green movement with the introduction of a new LEED standard focused on transparency, this year’s event had less of the intensity and sense of anticipation than the Philadelphia event. It was business as usual.

Transparency tools and certifications were front and center among exhibitors. More exhibitors than ever were offering services and digital tools to help companies get greener, to help measure sustainability aspects, to calculate LEED points, to translate transparency from one system to another. And while there was plenty of product to see, most of it wasn’t flooring. In fact, every year there have been fewer flooring exhibitors at the show.

Fortunately, three of the most sustainability focused flooring companies—Interface, Shaw and Forbo—were on the show floor, along with Roppe, StonePeak and a handful of others. Also exhibiting were producers of underlayments and sports flooring. Many of the flooring companies that used to be exhibitors had people at the show, but only to attend the education seminars.

The National Wood Flooring Association (NWFA) had a space on the floor. The group was there to talk about its Responsible Procurement Program (RPP)—Mannington, Mullican, Sheoga and Shaw, including Anderson, are members. The NWFA’s program is also integrated into Forest Stewardship Council (FSC) certification, with RPP members required to be FSC chain-of-custody certified within a year of joining.

NSF International, which has led the development of multi-attribute certifications for both the carpet and resilient industries, is now working with the National Stone Council to create a sustainability standard for stone, ANSI/NSC 373. In addition, NSF has partnered with software provider PE International to develop a tool that not only simplifies sustainability reporting, but also is much more affordable than the standard tools on the market.

The Vinyl Institute had a space on the show floor, with its representatives focusing on a possible improvement of its relationship with USGBC and LEED. The institute reported that it has been invited to serve on the recently constituted Supply Chain Optimization Working Group, which is tasked with examining aspects of the Materials and Resources credit in LEED v4. In the past, vinyl producers and associations have felt locked out of the development process for LEED standards.

Interface’s booth featured display walls holding a variety of natural materials as part of its biophilia theme. Biophilia, which means a love of nature and living things, not only informs design but also serves as the foundation for humanity’s bond with nature, and it underscores the importance of caring for and nurturing our environment.

Interface announced that it has made a Clinton Global Initiative Commitment to a three-year expansion of Net-Works, the sustainable program that recaptures nylon fishing nets from remote and often impoverished fishing communities. The pilot program is in the Philippines, reclaiming fishing nets that are damaging the Danajon barrier reef, and a new program is being created in Cameroon for a lakeside fishing community.

Shaw Industries was also at the show, talking about cradle-to-cradle developments and showcasing a new carpet collection called Cut and Compose, with 1.5% of sales from the collection going to the Center for Green Schools, a USGBC initiative.

Shaw is working with the Make It Right organization, founded in 2007 by Brad Pitt, which builds sustainable homes and communities for those in need. Shaw has committed to providing flooring for 150 New Orleans homes, and to date 100 have been completed. Shaw has also worked with Make It Right in Kansas City.

Another green leader, Forbo had a column in the middle of its booth with a billboard depicting transparency tools like EPDs and HPDs in the nutrition and ingredient formats found on packaged foods. The firm has gone one step further with Usetox, a system that assesses key issues missing from the other tools, like eco-toxicity and human toxicity, examining not just inherent material toxicity but also key issues of exposure.

StonePeak, a subsidiary of Italy’s Fiandre Group that manufactures in Crossville, Tennessee, exhibited porcelain tile with high recycled content. In addition to internal waste, the firm also recycles defective porcelain sanitary ware, as well glass from light bulbs and screens. Its domestically produced tile includes 6% post-consumer recycled content (from glass), third-party certified, and post-industrial content ranges from 32% to 90%, depending on color. Also, at 8mm StonePeak’s standard tile is already slightly thinner than the industry average, and by the end of next year it will start production of 6mm tile.

Roppe, which produces rubber and vinyl flooring, exhibited at Greenbuild, focusing on its Impact rubber recycling program. The program, launched in 2010, reclaims virgin rubber flooring from Roppe and its competitors and turns it into materials like landscaping mulch and rubber crumb for athletic fields. The Ohio based firm also does a lot of programs in its community, including its sample production, which is provided by a team of over 100 people with physical and mental handicaps. The county program is run by Seneca Re-Ad Industries.

To Market came to Greenbuild with Strata, a new design in the Atmosphere collection of recycled rubber tiles and rolls manufactured in Salmon Arm, British Columbia. The products are made from recycled SBR tire rubber for post-consumer content as high as 87%, with EPDM used for color. High recycled content is achieved by fusing recycled rubber backings to colored faces, thereby minimizing EPDM, a virgin material.

MP Global showcased a radiant heat product for floating floors using conductive ink technology. This month, it is introducing another conductive ink product, this one for tiles.

Flowcrete was at the show to talk about its fluid-applied and resinous flooring. The firm uses three chemistries—epoxy, urethane cement and methyl methacrylate. Its biggest seller, urethane cement, is phthalate free with bio-based content from castor oil. The product expands and contracts at the same rate as concrete, which is a big part of the reason it is so durable.

Connor Sports, which regularly exhibits at Greenbuild, offers a full line of wood sports flooring, including an FSC-certified maple. Associates of the firm were also on hand to talk about Green Play, a subfloor system with panels made from 100% recycled polymer.

FieldTurf, a Tarkett company, exhibited at this year’s Greenbuild under its EasyTurf brand. Recent product introductions included Ultimate Natural, featuring blades with a C-shaped cross-section, making the turf softer and less heat absorbent. The blades are made of polypropylene and polyethylene. Other green products include the firm’s PDS drainage tile, 100% composed of post-consumer recycled turf. Recycled turf is also turned into infill.

DriTac showcased its VOC-free, solvent-free formulations, most of which have CRI Green Label Plus certification. DriTac 7700 is the firm’s 4-in-1 isocyanate-free (modified silane polymer) product. It’s an adhesive, a concrete moisture barrier, a crack suppressant and a sound control layer.

Schönox used its booth to highlight its synthetic gypsum products, which are made of recycled binder systems derived from byproducts of the emissions purification process at conventional fossil fuel power plants. So the recaptured material not only obviates the need to mine for calcium sulfate, but it also reduces the environmental footprint of the purification process.