Domotex Germany 2018: Where the world meets to share the latest innovation and styling - Feb 2018 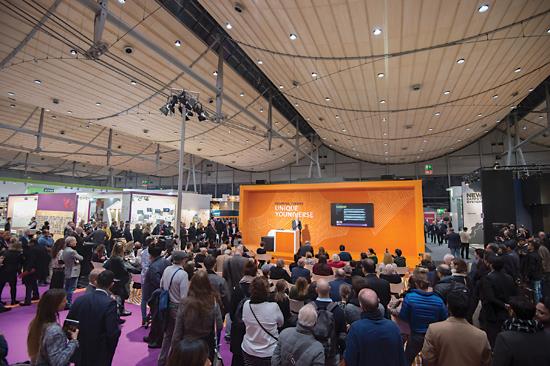 The atmosphere at last month’s Domotex in Hannover, Germany, the largest flooring show in the world, was more upbeat than it’s been in years. Attendance was high at 45,000 and the show set a new high water mark with 1,615 exhibitors leasing 1.14 million square feet of exhibit space. One contributing factor to this year’s success was the fact that the show wasn’t competing with the Bau architectural and builder show, which takes place every other year in Munich.

Deutsche Messe, the firm that manages the show, chose this year’s event, the 30th edition of Domotex, to completely reformat the layout and the schedule. Whereas in years past, the show has run from Saturday to Tuesday, the 2018 version was Friday to Monday. Even more importantly, the firm completely shuffled the deck on booth assignments and product themes for each building. With the new layout, handmade area rugs moved to Halls 2, 3 and 4 and machine-made area rugs shifted to 5, 6, and 7. Hall 9, which formed the corner of the L-shaped layout, served at the center for innovations, trends and lifestyle. It also served as the meeting place for VIPs, guided tours and themed exhibits. Hall 11 was devoted to carpet (which the Germans call textile flooring), Hall 12 was focused on laminate, LVT, rigid core and other resilient flooring. And Hall 13 was half hardwood and half installation sundries.

If you’ve never been to this show, each of the halls is about the size of a Home Depot store here in the U.S. Also, by shifting the show southward within the fair complex, Domotex is using more of the new, more architecturally pleasing buildings-featuring elaborate ceilings, glass panels and improved lighting.

Also, after about four years of Innovations@domotex, the independently judged product awards, the show dropped that program in favor of a Unique Youniverse theme focused on individualization. Some of the displays in this area were a little far-fetched, but it did make you think twice about where the future might take us.

It’s easy to explain why we attend this show every year. Granted, northern Germany is not a tourist destination in mid-January, but the beer and food are a welcome diversion. This Domotex show is where most of the new flooring innovations are introduced, and it is truly a global show, with over 85% of the attendees coming from outside of Germany. You really can’t be an authority in this business if you skip this show. In addition to hearing about the latest innovation, you also learn who’s making what and on what scale. Last year at this show, we learned that Mohawk’s IVC division was getting into the modular carpet tile business in Belgium, and this year we learned what equipment the firm had ordered. We also learned that both Mohawk and Engineered Floors are making sizable investments in the U.S. to switch more of their residential carpet finishing process from SB latex over to urethane.

With hard surface flooring, we learned that hardwood is working to accentuate the variety within its programs and to highlight how each plank is unique and different in a way that’s very hard to emulate with digital printing, using low gloss levels, natural stain-free visuals with very subtle character marks. And yes, long and wide is very popular, but so is herringbone and 24” parquet squares-the same type of visuals that tourists see when they visit old castles.

With the show’s new layout, a whole building (Hall 12) was devoted to “faux flooring.” This, by the way, is not my terminology but a direct quote from the lead architect that took an international group of architects on a tour of the show. But we did take note that 65 exhibitors in Hall 12 were focused on some type of multi-layered flooring. Thomas Baert, the president of CFL, who is launching a new FirmFit brand this year in the U.S., took the time to explain the present and future of multi-layered flooring. Today, much of what we see has PVC as the top layer, but scores of different companies are focused on developing floors that use a virtual pyramid of wear surfaces. At the bottom of the pyramid are the current WPC and SPC products that use PVC as the wearlayer, and as you move up in performance, you see melamine (same as laminate), to wood veneer and even gauged porcelain-all of which click together to form a waterproof floating floor that is warm, quiet, waterproof and easy to install. Baert recently was awarded a patent on multi-layered flooring that uses melamine as a wearlayer.

There were a couple of news items related to U.S. exhibitors. For years, Masland, Mannington and Bolyu have exhibited at the show primarily to offer American styled modular carpet, which is generally thicker and aesthetically different from what the Belgians produce. This year, Mannington came back and Balta debuted the Bentley Mills brand in its massive exhibit. Much like the U.S., carpet volume in Europe is on a decline, but as Balta CEO Tom Debusschere pointed out, the rug business is very strong in Europe.

This show attracts manufacturing machine producers from around the world, and the ones we spoke with are giddy over the backlog of orders they are getting from the U.S., especially in light of the depreciation changes in the new tax reform law.

Another dimension of this show that deserves mention is its architecture and interior design focus. The show does an excellent job of attracting designers by offering talks, special exhibits and guided tours, along with a VIP dinner that encourages their participation. Domotex clearly sees flooring as a fashion business.

Use the QR codes below to listen to interviews from the show with: Andreas Gruchow, Thomas Baert, Tom Debusschere and Harlan Stone.

The show has announced it is bringing Domotex to the USA in February 2019, a message that was echoed numerous times from the stages and with exhibit hall signage.