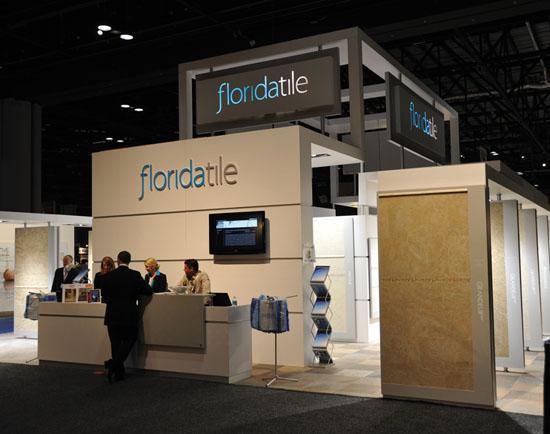 With over 1,000 vendors from 50 countries, the Coverings 2010 showroom floor reverberated with innovation, color and conversation in a variety of languages. Following its 2009 stint in Chicago, the show’s return to sunny Orlando brought an increase in attendees to 23,080, a 5% jump from 2009’s 22,000.

As Coverings is mainly a distributor show, a vendor can achieve nationwide coverage by partnering with just a handful of these attendees. Most importantly, Coverings 2010 proved that, in spite of a tough economy, manufacturers are continuing to innovate. Coverings 2011 is slated for March 14 to 17 in Las Vegas, Nevada.

The Tile Council of North America (TCNA) announced two important developments for the industry. As of April 14, LEED will no longer require VOC testing for ceramic tile. Ceramic tile is fired at high temperatures; as a result, it contains no organics and, therefore, does not off gas or produce VOC emissions.

TCNA executive director Eric Astrachan also announced that the U.S. government is adjusting its 2008 and 2009 tile export numbers. TCNA has believed for some time that the government’s export numbers were inflated. Though it is assumed that the problem existed prior to 2008, numbers previous to that year will not be adjusted.

Highlights from the show
Porcelanite rolled out a stunning and smart new booth design at Coverings 2010. To highlight its commitment to sustainable practice, the company salvaged used shipping containers to transport its products to the trade show. The containers were then transformed into key elements within the design of the booth itself—used as showcases that contained bath or fireplace scenes or as space within which customers could examine product samples. One container was used as a bar.

Based in Monterrey, Mexico, Porcelanite goes to market under three brand names: Porcelanite, which serves the housing, construction and institutional markets; Firenze, the company’s premium, fashion forward line; and Lamosa, a 100-year-old brand that serves as the company’s standard residential line. Most stunning of its new products is the Strausstech line, within the Firenze collection, which utilizes a chemical reaction to create a crackle look with a combined matte and polished finish. Strausstech comes in two colors, a denim blue and a mustardy tan.

Marazzi used what it dubs its 3D (digital design definition) inkjet printing technique to produce several new lines this year. Marazzi’s inkjet technology prints in 360 dpi, the highest within the industry. It utilizes grey scale techniques to produce finer lines and, therefore, greater definition. All inkjet work is done at the plant in Florence, Alabama.

SistemA, an eye-catching commercial line, features intense, vibrant colored tiles flecked with metallics. Marazzi has a patent pending on the way of mixing the glaze that yields the crystallization. The tiles are rectified, color body pieces that can be customized in any color. SistemA has a high level of abrasion resistance. The line’s brilliant lipstick red is particularly stunning.

Marazzi’s sister company Ragno, a high end design line, offered two new stone looks: a slate look called Calabria and Kashmere, which has the appearance of travertine. Both are primarily residential lines. Calabria features naturally occurring metallic sparkles. The line is offered in squares up to 20”x20” as well as a 12”x24” rectangle. Calabria comes in three colors and has coordinating mosaics, bullnose and brick liner. Kashmere includes 21% post-industrial recycled content and is offered in three colors: a cream, a tan and a terra cotta. Like Calabria, Kashmere comes in squares up to 20”x20”.

Crossville’s UltiMetal won the Porcelain/Ceramic Tile Floor category in the Coverings Select contest this year. The anti-scratch glaze on UltiMetal addresses a perennial problem for metallics. UltiMetal, a rectified porcelain, has a micromesh design and is offered in five colors, including an attractive copper, and comes in formats as large as 24”x24”. Accompanying mosaics and listellos are available as well.

Crossville’s new Get Planked program was featured at Coverings. Get Planked allows Crossville customers to choose their favorite product, excluding natural stone and glass tile, in 28 plank sizes. Get Planked has no minimum sales requirement and promises a short lead time.

The company’s Tile Takeback program, which has been in operation for a year, promises to recycle four million pounds of scrap tile annually. Powdered remains from the recycled tile are used in new Crossville products like the company’s EcoCycle, which contains up to 40% recycled content.

StonePeak’s Cesare Magnus was the other Porcelain/Ceramic Tile Floor category winner this year. Cesare Magnus, created using inkjet technology, is a through body porcelain that comes in four sizes up to a 24”x24”, and four colors: Light Splendor, Bronze Allure, Auburn Blaze and Golden Aura. The product is offered in two finishes as well—natural and semi-polished. The collection emulates travertines found in the ancient palaces of Rome.

StonePeak and GranitiFiandre introduced their Active Clean Air & Antibacterial Ceramic at the show. The titanium dioxide coating baked onto the tile produces a photocatalytic reaction in the presence of natural or artificial light and moisture. This reaction cleans the air of harmful organic and inorganic substances; eliminates bacteria on its surface; and creates a hyperhydrophillic surface or, in other words, a surface with a high attraction to water. This attraction creates an invisible layer of water that allows dirt to slip off easily. Active is suitable for both indoor and outdoor environments. The Active finish also enables the tile to break down organic stains.

In addition to the Active line, GranitiFiandre introduced its Extreme collection, which comes in sizes up to 60”x30”. Extreme is suited for both residential and commercial applications. The Giallo Di Siena Extreme, displayed at the show, was striking with its rich tones that ranged from sunflower to butter. In total, Extreme is offered in ten colors—ranging from a white to a black—some of which feature the wave finish, conveying the impression of softly rippling water.

The company’s Series 100 features up to 100% post-industrial recycled content. Series 100 tiles are 30”x30”. The line comes in four colors—a white, two greys and a black.

Tau’s big news at Coverings 2010 was its collaboration with renowned designer Karim Rashid, the No-stalgia collection. The firm also showcased Gravel, a look that hovers between concrete and natural stone, and comes in formats up to 31.5”x31.5”. Of the four colors of Gravel—which range from light to dark—Marengo, a mottled café au lait brown with hints of pale lavender, is the richest. Gravel is formulated for interior and exterior use.

The popular Corten, a distressed cement look, is now offered in two additional colors, Energy and Beige. Corten is available in 18”x35” and 35”x35” formats. Corresponding mosaics are available, including some that pair the colors of the line: peachy Beige with the terra cotta of Energy and chalky Blanco with Night. All four looks have signification color variation within each tile, mottling lighter and deeper versions of the colors.

Florida Tile unveiled fresh new branding and an updated booth design at the Coverings show. The company’s modern new logo—featuring ocean blue and stone grey in a slender font—was superimposed on the top of a white booth, backlit so that it almost appeared to glow. The overall feel was clean, contemporary and direct.

Utilizing its high definition print (HDP) technology, Florida Tile rolled out several new product lines this year. One of the company’s new introductions was Quartez, featuring 342 different pieces within the pattern and available in formats up to 12”x24”. Quartez is rated for both residential and commercial applications. In addition to Quartez, Florida Tile debuted Grandeur, Renaissance and Paramount. Grandeur and Renaissance offer marble looks. Grandeur has authentic looking mother-of-pearl accents. Paramount mimics travertine.

The company also introduced Pristine, made with traditional—rather than HDP—technology and featuring a natural finish. Quartez, Grandeur and Paramount are Americans with Disabilities Act (ADA) compliant. In total, the company launched 11 new lines in 2009. It plans to launch an additional 11 by the end of this year.

To complement its HDP technology, Florida Tile is experimenting with a new clear glaze called Toppa, a top coat that adds depth to the façade. Toppa can be polished for added sheen. Florida Tile has been testing the glaze for nearly a year and expects to unveil the product in the next couple of months.

Florim introduced five new product lines this year: Quartztech, Afrika, Layers, Wslate and Natural Selection. All five of these lines were made possible through high definition printing and are commercially rated.

All collections are offered in square and rectangular formats. Corresponding cove base, inside and outside corner pieces, bullnose and mosaics are available for each.

Additionally, Inalco showcased its Slimmker line of 5.7 mm pressed porcelain tile. Slimmker features a variety of looks including natural black slate, natural stone, light marble as well as metallic and paper-inspired looks. While thin tile offers an obvious environmental advantage, utilizing less material than traditional tile, the product is only now shifting from wall to floor use, and the verdict is yet out on how it will perform in that application.

Brazil-based Eliane featured two distinct product lines at the Coverings show. The front towers featured the conservative looks that appeal to the American market: marble, stone, and travertine imitations in natural colors. Inside the booth, however, Eliane revealed its high style side: a smoky wall tile glistening in metallics and imprinted with a swirly floral pattern, another embedded with glitter, and a show-stopping third studded with Swarovski crystals and detailed with silver pinstripes.

For American markets, Eliane featured a number of new lines including Amazon, Florence, Corsica and Oriental. In addition, the company introduced new colors into its stone-look Fuoco line. Fuoco has been on the market for ten years. Eliane’s new Contemporaneo, engineered for use in both commercial and residential applications, is available in a 17”x34” rectified format. The tile features a cement look in greys, beiges and browns. Comtemporaneo is a through body porcelain.

Breccia offers the marble look and comes in three colors—Stream, Mocha and Mint. Rocca is available in Sunflower, Portobello, Evergreen and Stone. Both Breccia and Rocca offer bullnose and mosaic accents.

Oceanside Glasstile/Mandala showcased a number of stunning displays combining small format glass and ceramic tiles. Oceanside Glasstile began 14 years ago as a company that manufactured handmade glass tile. Mandala was introduced later, and the colorways merge from one line to the other. The Avani line pairs glass with the look of marble and limestone, creating a floor with distinct dimensionality.

Oceanside Glasstile also rolled out its new Muse this year. Muse is a fully handmade glass tile; however, unlike most handmade glass tile, Muse features a smooth edge. Muse comes in 38 colors—an earth palette and an ocean palette—and 3 finishes: iridescent, non-iridescent and matte. Recycled content varies by color from 30% to 95%, a combination of post-industrial and post-consumer.