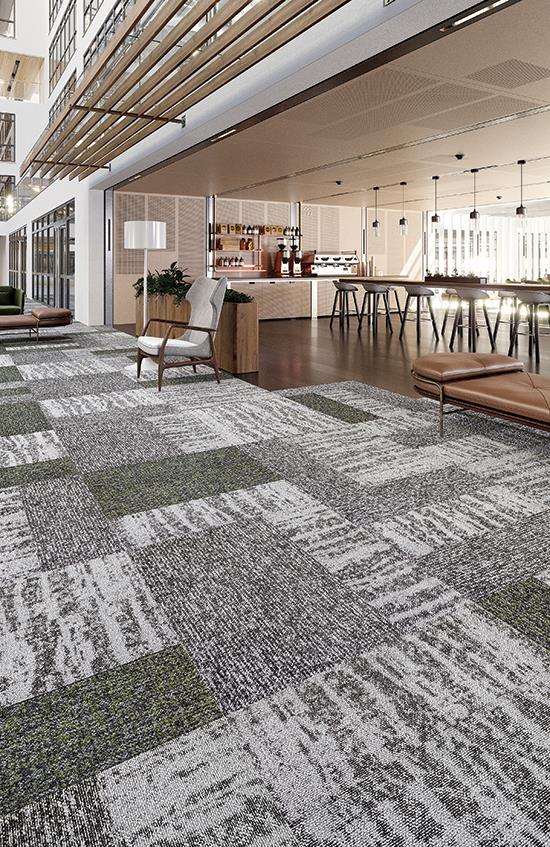 By Intrduction by Darius Helm; Statistics by Market Insights LLC

The commercial flooring market grew again last year, though at a subdued rate. Commercial flooring sales were up an estimated 2.1%, according to Market Insights, to $5.776 billion at mill sell. Predictably, all the growth came from the hard surface side, which posted gains of 6.3%, compared to losses of nearly 1% in the carpet category.

Hard surface flooring’s share of the market grew to 42.7% last year from 41.0% in 2017. Commercial hard surface is dominated by resilient and ceramic tile, together accounting for over 90% of flooring business-41.4% ceramic and 49.2% resilient. The balance comes from hardwood and laminate, with the former twice the size of the latter.

Needless to say, LVT drove business in 2018, lifting the resilient category nearly 14% despite unremarkable sheet vinyl sales and continued struggles in the VCT category. Rubber flooring, however, has been relatively healthy. And ceramic tile ended the year down marginally (-0.6%) in dollars and up 0.6% in volume.

The resilient category grew more in dollars than in volume (11.0%), in large part due to the shift away from the lowest cost products, like VCT, toward the LVT category, which covers a wider and higher price range. Rigid LVT is finding room to grow in the commercial market, though not at the explosive rate of the residential market. The floating floor installation is better suited to environments without heavy loads or huge volumes of traffic. However, manufacturers are starting to address this by coming out with gluedown rigid LVT.

Most of the LVT consumed in the U.S. market is produced overseas. In terms of flexible LVT, Market Insights assesses that U.S. production has grown to 21% of total consumption; and China is responsible for 64% of the LVT in the market. When it comes to rigid LVT (WPC and SPC), domestic production accounts for 5%, and China supplies 90% of the market.

The carpet category was down close to 5% in volume last year and down 0.8% in value. It was stronger in value as the result of both long-term and short-term effects. The long-term trend is the shift from broadloom to carpet tile; at the lower end of the market, replacing broadloom with carpet tile means spending more money, since entry-level carpet tile is priced well above entry-level broadloom. Carpet tile accounts for over two-thirds of the commercial carpet market.

And the short-term effect has largely been from raw material increases and a premium on transportation costs due to rising fuel costs and new trucking regulations that prevent truckers from putting in long hours-essentially reducing transportation supply.

One growth area for commercial carpet, though it’s difficult to quantify, is custom cut rugs, and it’s also a growth area in the residential market. On the commercial side, several mills have in-house serging and binding services. Just about every carpet mill reports gains in custom-cut rugs, and for some the growth is significant. Custom-cut rugs are increasingly used in the hospitality market, in part to balance out the acoustics from all of that hard surface flooring, and in corporate to define zones and help build that resimercial vibe.

Beyond these hard surface and soft surface floorcoverings, a big chunk of commercial square footage-estimates run as high as 15%-is covered in polished concrete. It has been a utilitarian flooring solution for high impact areas for decades, particularly in retail sectors like home improvement and more recently in grocery chains, but it’s been trending as an aesthetic option for about ten years, initially in the tech sector. It’s still strong in workplaces, restaurants and institutional settings, but the market is in general shifting to warmer and less industrial expressions, so demand is not as widespread in higher end applications.

SECTOR UPDATE
Most of the commercial flooring manufacturers included in this report indicated that the second half of 2018 was more active than the first half, and despite an initial slow start to 2019-in part due to regional weather impacts but also because of the chaos and instability during the government shutdown-the market seems to have picked up. And a report earlier this year from Dodge Data & Analytics on commercial and multifamily starts correlates well, with 4% growth in starts nationally in 2018 following an underperforming 2017. Considering the lag time for flooring installations, it makes sense that the flooring industry would feel the impact after at least half a year.

Part of the increase last year came from a general boost to companies from the changes to the tax code signed into law at the end of 2017. However, the impact is expected to wane this year, which will likely impact investments in renovations and new construction. But if the economy continues to be healthy and GDP maintains the levels of Q1 2019-currently estimated at 3.2%-the growth rate could be sustained.

Dodge defines “commercial and multifamily” as just about everything except the institutional sector-education, healthcare and public space-and it reports that multifamily drove construction starts last year, up 8%, compared to 1% growth for “commercial,” i.e. the corporate, retail and hospitality sectors. The multifamily market originally seemed to have peaked in 2016, and starts fell 8% in 2017, but Dodge reports that it rebounded 8% in 2018, defying expectations. And when it comes to flooring, the sheer increase in multifamily units over the last decade-according to Statistica.com, renter occupied housing units have risen 27% since 2005-has made the segment a bigger piece of the pie for flooring producers for the foreseeable future.

A decade ago, the multifamily market was not a major focus for most of the commercial producers, but these days it’s always in the discussion and it has become one of the biggest and most consistent markets.

Urban high-rise apartments have been responsible for a lot of the growth in multifamily in recent years. Many of the major metro markets in the U.S. have been building like there’s no tomorrow, and in many cases it’s upper-end apartments that are being built. And there were plenty of large projects last year in markets like New York City, Chicago, Boston and Washington, D.C.

Some manufacturers report that the sector is cooling off a bit, but more growth is expected for 2019. Part of what is driving the sector is the wave of redesign to attract the younger demographic. The grand and opulent designs of old hold little meaning for Millennials, and the current pared down aesthetic is driving big gains in hard surface flooring-often LVT or rigid LVT-over carpet. Carpet tile is also making inroads, though not at the same rate.

The hospitality sector remains broadloom’s strongest market, and has ceded ground to carpet tile at a far slower rate than the other commercial sectors. Senior living is another strong broadloom market, mostly because it blends hospitality and residential aesthetics-carpet in the residential market is almost entirely broadloom. And there’s still a lot of broadloom used in the mainstreet market, which was slow to accept carpet tile, in part because of cost. But mainstreet is converting to carpet tile at a faster rate than senior living or hospitality.

The corporate sector, which is by far the biggest sector in the commercial market and is made up of owner-occupied and tenant improvement spaces, has been mixed. Some manufacturers felt that the market was sluggish but not underperforming in a big way, and gains reported by some producers were generally modest.

The education market was fairly active last year. On the K-12 side, more bond issuances helped drive school projects. Higher education, which gets a lot of funding from endowments, has been strengthening following a few years of mediocre activity.

Senior living had a growth year, as did healthcare. For both sectors, the market is primed for growth. In the case of senior living, Baby Boomers are starting to fill retirement communities. A slowdown in new construction in the wake of the Great recession left a lot of demand unfulfilled, and as the economy heals, the market has started to respond. Much of the healthcare sector is in need of renovation to accommodate better healthcare models, and there’s also a decentralization trend, with smaller clinics and medical offices being established in suburban areas and other less populated areas.

One sector that is by and large underperforming-and has been for years-is retail, mostly due to the shift to online retailing. Discount stores remain the most active part of the retail sector. Traditional retail environments, like large malls, have been suffering and losing their anchor stores.

There’s a movement in retail to redefine the shopping environment, with a focus on experiential concepts that will draw foot traffic. It’s an idea with an endless array of expressions, incorporating everything from VR and AR technologies and personalization through app interfaces to magic mirrors that let you try on virtual clothes in a physical store and the addition of physical amenities, like live music, eateries and recreational opportunities-House of Vans in London even offers skateboard ramps.

Mainstreet business, defined as unspecified and sold through residential channels, has generally been fairly strong. And in the last few years, several manufacturers have created new mainstreet businesses, like Engineered Floors with Pentz, the Dixie Group with Masland Energy and Phenix with Phenix on Main.

For a close look at the Top 15 Specified Carpet manufacturers and Commercial Hard Surface manufacturers, see the June 2019 issue of Floor Focus Magazine.