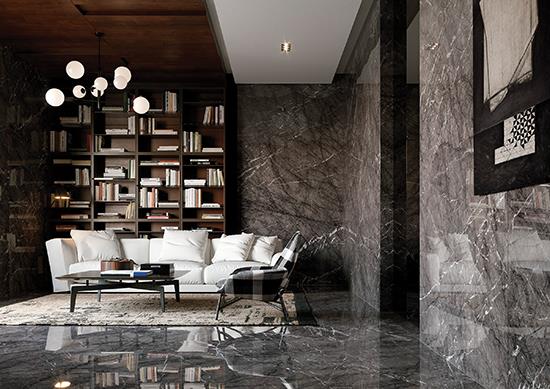 Despite challenging economic conditions in Europe and elevated competition from lookalike products, the Cersaie tile show held in late September in Bologna, Italy set new records for attendance. Held every year at the end of September, this year’s 37th edition attracted over 112,000 visitors (up 0.2% from 2018), and out of that, 53,000 came from foreign countries.

The success of this show can be attributed in part to its massive size, with 1.7 million square feet of exhibit space, but another major factor is the diverse range of programming tailored to attract designers, architects, builders, distributors, exporters, manufacturers and installers. New this year was a space in Hall 29 called Archincont(r)act-an interactive discussion area featuring the ten leading architectural firms in Europe. Also new was a humorous display called Famous Bathrooms. Back by popular demand was the architectural gallery of speakers, which offered Chilean architect Felipe Assadi as the keynote, and Tiling Town, a hands-on installer area. The show lasts five days, with a list of awards, speeches and conferences too numerous to report.

From a global perspective, tile is the marketshare leader as a floor- and wallcovering choice with about 13 billion square meters produced each year. From a dollar perspective, the Italians are the marketshare leader-producing 32% of the $18.6 billion market. In square footage, Italy is tied with Spain for second place (at 15%) in the global market behind China, which holds a 29% share but manufactures product that is much cheaper.

It’s no secret that the ceramic tile flooring market has been negatively impacted around the world by the rising popularity of LVT, which, like tile, can be produced to emulate a wide range of visuals. But thanks to the advent of thin gauged panels, tile is no longer limited to use as a floorcovering or wallcovering. These large-format tiles are now being used as countertops, cabinet faces, landscaping surfaces and even building cladding. Another growth factor is the realistic visuals, which allow manmade porcelain tile to look like marble, stone and concrete, while at the same time costing less and performing without having to be sealed. So, while LVT is taking share from tile, tile is taking share from stone, concrete and terrazzo.

The entryway to the Florim space at Cersaie featured large format slabs in marble and stone looks. The interior of the booth was designed as room vignettes, and in this photo the dining room is visible, featuring I fiati di rex, a floral wall tile that has the distinct appearance of a silk fabric wallcovering.

Concrete looks continued to be popular at the show. Greys were still a big trend color, and blue-greys were extremely trendy.

Almost all spaces featured large-format tiles in varying thicknesses for use on walls and floors both for interior and exterior use. While 120cm x 260cm (approximately 4’x8-1/2’) was a fairly common size, there were also slabs as large as 160cm x 320cm (approximately 5-1/4”x10-1/2”). The look of oxidized, weathered metals was another popular trend throughout the show.

One refreshing trend was taking a style, such as a metal look, and adding a pattern within it to create a unique look. This was done in stone looks (a faint floral pattern subtly overlaying a limestone), concrete (letters, maps and florals lightly covering concrete-look tiles) and other natural elements. This trend allows manufacturers the freedom to be creative.

The Famous Bathrooms exhibit was a series of quirky galleries that took visitors on a journey through an array of creative and artistic interpretations of the bathroom, inspired by famous personalities such as Woody Allen, The Beatles, Sigmund Freud, Marilyn Monroe and Coco Chanel, to name a few.

Wood looks were not quite as prominent at this year’s show, but they were certainly still present. With the advances in digital printing technology and manufacturing finishes, many of the collections looked and felt like real wood. But many manufacturers were taking another approach with wood visuals and producing wood-look tiles in sizes and shapes that were not realistic and gave wood a more modern, tile-like feel.

Exposed aggregate was another prominent trend at Cersaie 2019. There were many terrazzo and stone looks, some very realistic and others exaggerated versions of the real thing. All manufacturers were offering collections in varying sizes and thicknesses for multiple applications.

Florals were abundant. Some had the look and feel of vintage silk wallcoverings, while others were glossy, lacquered finishes with photo clarity and depth of color.

Marble looks were everywhere at this year’s show and with the precision in digital printing, the veining and visuals were more realistic than ever. While much of the marble looked exactly like the real thing, many of the interpertations we saw were in dramatic colorways-blue tones were abudant-with exaggerated designs giving the classic stone new life and decorative imagination.

TILE FIGHTS TO REMAIN THE LEADING FLOORCOVERING AND INTERIOR FINISH
The tile industry around the world is circling the wagons and creating informative videos and websites to remind homeowners and designers why tile is an innovative material that has withstood the test of time as the best material to use as an interior surface. In the U.S., the website is called Whytile.com, and in Italy it’s called Ceramica.info. One of the key missions with both efforts is to remind the consumer that the product is not only durable, natural, waterproof, inorganic, fireproof, chemical resistant, recyclable and easy to clean but, most importantly, beautiful to live with.