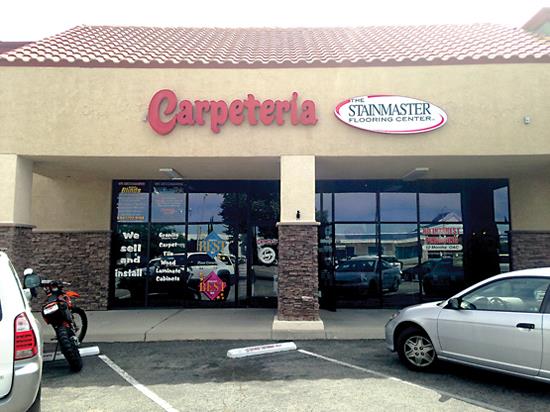 In fact, rather than sending a measure man into each customer’s home, Barry, Larry or Jack pay each customer a visit, then recommend flooring products based on their observations. “We like the size we are,” Barry says. “When people come in, we treat them like they are part of our family.”

A PHILOSOPHY OF CUSTOMER SERVICE
Not only are Barry, Larry and Jack willing to stay small to keep up their level of service, but they are also willing to turn down a sale if a customer is intent on buying something they don’t feel is a wise selection. “We would rather send a job away than put something in that we don’t believe in.” Over the years, that practice may have resulted in a few less clicks on the register, but ultimately it works out in the operation’s favor. “People have returned years later after installing the floor we advised against.” says Barry. “And they’ve thanked us and asked us to put in the floor we suggested.”

In addition, in the rare instance that a customer experiences a problem with their flooring, one or more of the three leaders will visit the home in an effort to find a solution. “We don’t avoid issues,” Barry says. “We go and take care of them, and typically Jack and I go together.”

Barry notes that selecting manufacturers willing to stand behind their product is key in this regard. He only works with those who are as committed to pleasing the end user as he is, naming Tuftex, Stanton and Karndean as some of his top lines. Both Lancaster Carpeteria and Santa Clarita Flooring are Stainmaster Ultra dealers, and Barry believes strongly in the quality of the Stainmaster product.

“We care about every floor we put in. We hand select product for every job. We are designers, not just salespeople. When we go to look at a project, we consider what is the best product to put in the house. We help the people out, take our time and show them what we suggest. No one really does that any more. That is why we chose to be a Stainmaster Ultra store. Their product is guaranteed for life. No matter what happens to the carpet, they will replace it for free.”

OPENING A BUSINESS ON A SHOESTRING
Barry spent 18 years working as a sales rep for Metro Floors of Lancaster, California, and after a great deal of success in the role, he reached a point where he felt as if he should either buy in as a partner or set out on a new endeavor. His mother encouraged him to go the entrepreneurial route and loaned him $30,000. With that money in hand, Barry says that he and Jack decided to buy into the Carpeteria franchise. “We chose Carpeteria because it was very affordable, and the name has been around California since 1958. They helped us with getting free racks and putting our store together. We built the store for $30,000, which is crazy cheap.”

It wasn’t only Barry’s mother and Carpeteria that were instrumental in helping Barry and Jack get their feet under them. Barry explains, “We were looking at different locations in the valley and found this street where we could see the potential; there were projects being built. We started in a store with 2,000 square feet and got six months free rent. Because I had so many friends in business who believed in me, the reps basically loaded the showroom with samples for free. To this day, I still sell the products of the reps who were there for me from day one. “

Barry and Jack opened the Lancaster Carpeteria store on June 1, 2002, and the business hit its first million in sales on December 31 of that same year.

It was only 18 months ago that the team and Barry’s brother Larry, who was a longtime Beaulieu rep, took on the Santa Clarita location. At the time, a friend in the business owned the store, which was losing money, and called Barry asking for advice. Barry looked into the business and determined the source of the problem. He suggested his friend sell the store but was told that he couldn’t because it was $35,000 in debt. In addition, because it is a Stainmaster Ultra location, the buyer would have to be approved by Stainmaster.

Since Lancaster Carpeteria is also a Stainmaster Ultra dealer, Barry and Jack were already approved, so Barry said, “How about we pay off your debt, and you give us the store?” The friend agreed. Larry now runs operations at the Santa Clarita store and has doubled its sales in the time the team has owned it.

COMMUNITY IS KEY
Barry believes strongly that Carpeteria’s community involvement is a key to its success. “I am part of all the chambers, I go to every community event, I donate to everything,” Barry explains. One of the most significant donations Barry makes to the community each year is his time.

Although he was quite shy as a young man, during college Barry found that he had an interest in television and radio broadcasting. He dove in and loved it. “I really came out of my skin. I got a charge out of getting in front of a crowd.” Today, Barry acts as master of ceremonies at 30 to 40 community events annually—all for free—and asks only that they introduce him as “Barry White, owner of Carpeteria.”

In addition, Carpeteria participates in television advertising. Barry reports that he pays less than $5 per spot on local cable channels and targets those that appeal to women, families and do-it-yourselfers. Barry and Larry appear together in the commercials.

In addition, the company hosts private sales twice annually and has found great success with these. Prior to the sales, the company sends out 15,000 invitations to targeted local consumers, typically in the more affluent communities. At one sale, the company sold a half million dollars worth of product in one day.

Each of the stores also has a Facebook page. The companies have hired a person outside of the business to maintain these social media sites.

THE BUSINESS OF BUSINESS
Barry isn’t feeling the installer shortage at present, and he attributes that to the fact that Lancaster Carpeteria and Santa Clarita Flooring treat their installers well. Both stores have roughly ten crews of 25 independent installers in the field daily. They pay them more than the competition is paying, and they give bonuses for good work.

While Barry feels like he has a good handle on how to maintain a quality installation crew, finding committed salespeople has been a bit more challenging. “We’re all set now,” he says, “but it is really hard to get a good, qualified salesperson who wants to put in the hours.” Because the store owners have chosen to run the business so hands-on, they have only an additional seven employees between the two locations.

In addition to retail business, which accounts for roughly 80% of revenue, the companies sell to the commercial market as well as to the multi-family market.

As of October 2015, both Lancaster Carpeteria and Santa Clarita Flooring recycle 100% of their used carpet and padding through Los Angeles Fiber. The recycled padding is made into new pads, while the carpet is recycled into car parts. In 2015, for the second consecutive year, Lancaster Carpeteria offered a $1-per-yard rebate for customers who purchase Stainmaster carpet and want to recycle their old carpet.