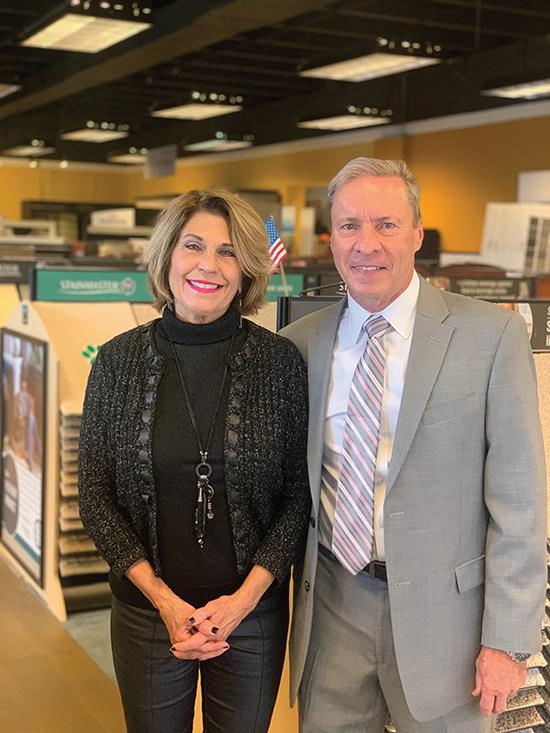 As the saying goes, if you love what you do, you’ll never work a day in your life. The truth of that maxim is clear when speaking with Donna and Jim Mudd-president and vice president, respectively, of Sam Kinnaird’s Flooring-whose affection for the flooring business is evident. Perhaps it is the outlook that Donna, a former kindergarten teacher, brings to her daily work: “Teaching is a people business, and so is flooring. Everyone who walks in here has a different story, different things they’d like to achieve. It’s always interesting, and it’s always fun.” That optimistic perspective has served Donna and Jim well for nearly three decades, and, in spite of the fact that the flooring retail business isn’t getting any easier and the couple has received offers of buy-out, they report, “We are just not ready to get out of the business yet.”

TWISTS OF FATE
In an odd twist of fate, it was tennis that drew Jim into flooring. Having spent a decade working at 3M in the commercial chemical business, Jim was looking for a new adventure. He discussed his itch with his tennis partner, Sam Kinnaird. Kinnaird, as some in the industry might recall, was a founder and co-owner of Kinnaird & Francke Interiors, a large flooring retail outfit birthed in the 1960s, with a dozen stores across three states. Sam’s wife, Pat, also worked in the business.

At the time, Kinnaird had sold his stores to his partners, expecting to retire, and had a six-month non-compete, but he was willing to help Jim get a start in the business. What Jim needed, Sam told him, was a partner and a location. Besides Sam, Jim knew only one person in the flooring business, a high school classmate named Merv Huber, who Jim hadn’t really kept in touch with but ran into from time to time.

Jim and Donna (who have been married 44 years this month) went to Huber’s place of business under the pretense of shopping for flooring. After their visit, Huber followed up, hoping to clinch the sale. “He kept bugging us,” Jim explains with a laugh, “and we finally told him, ‘We aren’t going to buy a floor. We want to go into business with you.’”

Merv looked at Jim and said, “Jim, I like you a lot, but there is only one person I’d go into the flooring business with, and that is Sam Kinnaird.” Huber, it turned out, had worked in Sam’s floorcovering operations earlier in his career and thought very highly of the entrepreneur.

“We couldn’t say who our partner was because of the non-compete,” recalls Donna, “but I think the look on Jim’s face told the story.”

Huber, Jim and Sam got to work seeking a location, which required a months-long search, and honing the details of the venture. Sam wasn’t interested in jumping into daily operations again, but he was willing to mentor Jim, which he did for a decade. Huber, Jim and Sam launched the business in 1989. Donna continued teaching for two years, then transitioned over.

In spite of the fact that Sam wouldn’t be running the operation, Donna reports that the decision to use the Kinnaird name was clear, both because the name has such a good reputation in the community and because, Donna laughs, “Mudd Flooring” doesn’t carry much appeal.

Sam retired for a second time in 1999 and died in 2016. Huber is still Jim and Donna’s partner and active in the business.

DETAILS
With the Kinnaird brand’s heritage in soft surface, carpet remains Sam Kinnaird’s best-selling product category, accounting for about 60% of sales, including area rugs. Jim recalls that Sam was always very committed to brands and, as such, the business became a Stainmaster Flooring Center-the only one in the state.

Years ago, as a promotional venture, Sam Kinnaird’s launched private Stainmaster sales, which typically take place the first Saturdays of March and October, and the company has earned a great return on those events. As hard surface became more popular, the group decided to add a third private sale and chose July for this event, as that was the slowest month of the year sales-wise besides December. The Mudds sought out a manufacturer partner for this event, and Armstrong signed on. Now July is one of the company’s top three busiest months-the others being March and October.

On the hard surface side, hardwood and LVT account for a combined 25% of the business, with sheet vinyl, ceramic, countertops and showers making up the remaining 15%.

The company diversified into countertops and showers within a year of the 2008 downturn. “At the time, we were about 40% new home construction,” says Donna. “We lost 35% of that overnight, so we needed new revenue generators. We closed a store and got into some new things. We also focused on the multifamily business-so many people were losing their homes and moving into apartments. And we started doing more commercial work, which is now larger than multifamily and today accounts for around 25% of sales.”

Donna notes that having designers on staff-Sam Kinnaird’s has four-helps win both remodeler and commercial work, especially with firms that don’t have designers of their own.

MEMBERSHIPS
Jim considers his membership in the National Floorcovering Alliance (NFA) “the greatest thing ever.” In fact, he served as president of the organization for a time. Explaining his enthusiasm for the group, he says, “Kentucky is not a big state or populous, yet here we are [a flooring company from Kentucky], sitting in meetings with companies owned by Warren Buffett-that’s quite a coup. If we have problems, we ask for help, and the members all respond. And the beauty of it is that we aren’t competitors. We are all learning from each other.”

In addition, Donna is a member of Business Network International and speaks highly of the opportunities that group has afforded. There are six local, related businesses in Donna’s group (for instance, an electrician, a builder, a flooring provider, etc.), and the group supports each other through referrals and the like. “The revenue that we have made as a result of that organization is huge,” says Donna. “You have one-to-ones, and you get to know your group personally.” The group meets weekly and has a strict attendance policy.

In addition, Donna is a member of the Women’s Business Enterprise and has served on the board. She reports that she has received great information from participation in that organization as well.

THE SALES SIDE
Sam Kinnaird’s leans heavily into customer service, and, in fact, guarantees its installations for the lifetime that the buyer owns the floor. Last month, in fact, Sam Kinnaird’s repaired a floor 14 years after installing it.

In addition, the company is proud of the fact that it has a veteran staff and experienced design team. After each installation, the sales team follows up with a phone call in which they encourage the homeowner to share feedback about their experience with Sam Kinnaird’s and asks the buyer whether they would be willing to give them a five-star Google review. “People like to be able to say how they feel,” says Donna. “And the online reviews have helped us tremendously.”

The Mudds do find that one of the greatest challenges with business today is staffing. “It takes a year to get the knowledge you need in sales,” says Donna. “Retail sales associates can make a lot of money, but it takes time. If they have the tenacity to continue and learn, they will reap the rewards, but it can be overwhelming on the front end.”

KINNAIRD'S FIRST ACT
In August 1967, Pat and Doug Francke and Sam Kinnaird formed Kinnaird & Francke Interiors. From 1970 through 1982, the brand opened 12 more locations throughout Kentucky, southern Indiana and Georgia, becoming one of the top ten carpet retailers in the country. Kinnaird & Francke was primarily a carpet operation and did a good amount of builder work. According to his obituary, Sam was known for his promotional endeavors for the business, including hot air ballooning.

In 1983, Sam sold his business to a group of employees, who later sold it to CarpetMax, which meant that, for a time, Sam Kinnaird Flooring was actually competing against the business that had been Kinnaird & Francke. Ultimately, CarpetMax went bankrupt.