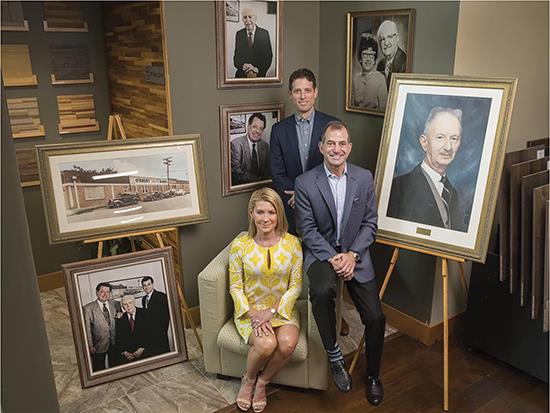 After 106 years in the flooring business, O’Krent Floors of San Antonio, Texas joined the National Floorcovering Alliance (NFA) this year as an investment in its future. The organization, currently run by Sam O’Krent and his wife, Margie-had a wonderful relationship with Abbey Carpet & Floor for over 25 years, but believed it was time for change as it grows and readies for the fifth generation of family leadership.

A BUSINESS THAT HAS ENDURED
Samuel O’Krent opened O’Krent Floors in Cincinnati, Ohio in 1915. O’Krent was one of the few non-union installation houses in the city and ran up against the union when it won a significant commercial tiling job in a high rise. The day before installation was about to begin, the O’Krent team placed the boxes of tile to be installed in the space and came back the next day to find them smashed. Samuel took this as a sign that he needed to move his family and business out of Cincinnati.

Someone in the know-likely a manufacturer rep-told Samuel that there were three cities in the U.S. that needed flooring stores: Peoria, Illinois; Sacramento, California; and San Antonio, Texas. The O’Krents set out to explore all three and fell in love with San Antonio. The family and business relocated in 1936.

Samuel’s son, Theo, and his wife were the next generation to take the helm, and their son, Arthur, launched a new venture, O’Krent Fabrics, which manufactured window coverings. The products were sold across 40 states, including in many floorcovering stores. Current O’Krent Floors CEO Sam followed his father into the window coverings business and reports that, in the 1970s, he called on many NFA members as clients.

In 1990, Theo approached his son and grandson and told them that the flooring business was too large for him to handle alone. If the pair were uninterested in joining him, preferring to remain in the window coverings venture, he would sell the business. Arthur and Sam decided that Sam would step into the flooring business, while Arthur would remain on the window covering operation. The pair would run their businesses separately but consult one another on major decisions. Sam looks back joyfully on those years, reporting that it was wonderful to work side-by-side with his father and grandfather. Sadly, it didn’t last long. In 1997, at age 90, Theo passed away, and two months later, at 62, Arthur died unexpectedly. Sam was left to run the flooring operation alone.

Though Samuel, Theo and Arthur’s wives had all worked in the business, Sam’s wife, Margie, a CPA working in a Big Eight firm, had always resisted. Though she disliked her accounting job, she was the major breadwinner in the family. However, Sam told her he’d rather her be happy than continue in a lucrative job she hated. In 1990, she quit her accounting job and became a flight attendant, an occupation that she enjoyed.

In 1997, just after both Theo and Arthur died, an O’Krent Floors employee went on vacation, and while she was gone, it was discovered that she had been embezzling. With her CPA experience, Margie stepped in to help with the audit, and Sam reports emotionally, “I got a partner again.”

Margie continued flying but got increasingly more involved with the flooring business. Finally, in 2013, she retired from American Airlines after 25 years to serve as the CFO/treasurer/vice president of O’Krent Floors. Says Sam, “Margie is in charge of all back-office staff and systems. She is a key part of the management team, and she brings an employee perspective. I grew up in this business and have never worked for anyone else. Margie will often say to me, ‘That’s not the right direction for our employees.’”

Jason, the son of Sam’s older brother, joined the business in 2016 after a successful career as an energy broker. Sam reports that Jason is a natural at sales and in his first year on the job was the second highest-grossing salesperson. Today, he is director of sales and is expected to take over the business in the next 15 years. “I promised him he wouldn’t have to work for a 75-year-old man,” says Sam, 60, with a laugh. Jason has helped the company advance its IT systems, and while O’Krent Floors has been a RFMS user since 1983, Jason facilitated its implementation of RFMS’s Measure Mobile.

Sam believes O’Krent Floors to be the oldest floorcovering business in the U.S. still run by the founding family and notes excitedly that Jason has two young children, which makes the sixth-generation of O’Krent leadership a possibility. (Sam closed the final piece of O’Krent Fabrics in 2000.)

THE O’KRENT LEGACY
Not all O’Krents have worked within the family business. For instance, Sam has two brothers who aren’t involved with the store. The sequence of leadership is as follows: Samuel, who founded the firm; Theo; Arthur, who founded O’Krent Fabrics and focused primarily on that business; Sam, the current leader; and Jason, who will take over when Sam steps down.

NO STANTING STILL
Sam loves change, which might seem ironic for a man who carries his great-grandfather’s name and walks in his footsteps professionally, but perhaps it’s the fact that he is willing to revamp what others might be tempted to hold sacred that makes him successful. Twenty years ago, Sam moved O’Krent Floors to its current location, a high-growth area on major thoroughfares. Sam believes his 34,000 square feet flooring-only to be nearly the largest in the state, second only to Nebraska Furniture Mart.

Currently, business is “crazy good” for O’Krent Floors, up 30% year-to-date over 2019, which was O’Krent Floors’ best year ever. And while things are going well, the business’ admission to the NFA means that a great deal of change is coming down the pike. The transition from Abbey to NFA necessitates alterations in the showroom, which was in need of an update to reflect the changed flooring mix today. “We have been in our current building for 20 years,” says Sam. “When we moved in, 70% of the market and the show floor was carpet, and 30% was hard surface. Now, the numbers have flipped, and that is a major part of our renovation-dedicating the right square footage to the right products.”

Throughout its history, O’Krent Floors has dipped its toe outside of the retail stream. For a period of time in the 1970s, the company did a lot of production builder work. Today, it does none. “Core values are there for the life of the company and will never change, but a company’s purpose is for as long as a leader is behind the desk,” says Sam. “Ours may change when I’m not behind the desk anymore, but right now, our purpose is mid- to upper-end residential replacement. About 20% of business is commercial. And we do a little custom builder work.”

PHILANTHROPY
O’Krent Floors takes pride in its involvement with the community, believing that giving back is very important. Both Margie and Sam serve on several boards. In his father’s memory, Sam created the Arthur O’Krent Golf Classic, which has raised $1.4 million for the American Heart Association since its inception in 2003. Sam is grateful to the many donors who support the event and notes that while 50% of donations come from San Antonio locals and businesses, the other 50% comes from the flooring industry associates.

A GREAT WORKPLACE
O’Krent Floors wants to be the best floorcovering company to work for. Period. Not the most lucrative or largest player in floorcovering retail but the greatest place to work. Each time the company makes a hire, the prospective employee interviews with multiple O’Krent Floors employees to determine whether they will fit well into the team. “We would rather close our doors than stray from our values,” says Sam.

The business’ retail sales associates are compensated via straight commission, and Sam encourages them to build their own businesses as they build O’Krent’s. “The volume and customers are out there,” he says. “It’s just about how much they want to dedicate to the job. We operate on a sliding scale based on gross profit of a job. The higher the margins, the more they will make.” Retail sales associates also handle mainstreet commercial business. If a project has a general contractor involved, the sale goes through the commercial division.

Sam credits his staff for helping the store through the challenging Covid months but notes that customers changed over the course of the pandemic, “As a team, we have focused on setting consumer expectations. In early Covid, every customer was nice, warm and understanding. People aren’t that understanding anymore. Now, they want to get things done and move ahead, but there are product issues with availability, trucking issues. We are up 30% but we certainly don’t have 30% more installers, and we could use more salespeople.”

Amid Covid, the company ran television commercials backed up with digital efforts that drove traffic to the website, where it features a visualizer and encouraged customers to make appointments for consultations. The program was incredibly successful.

INSTALLATION WORRIES
At one time, all O’Krent Floors installers were employees. In the early ’90s, with the costs associated with having employee installers rising, O’Krent Floors cut its installation team loose to function as contractors, but today, Sam is thinking about bringing some back on staff.