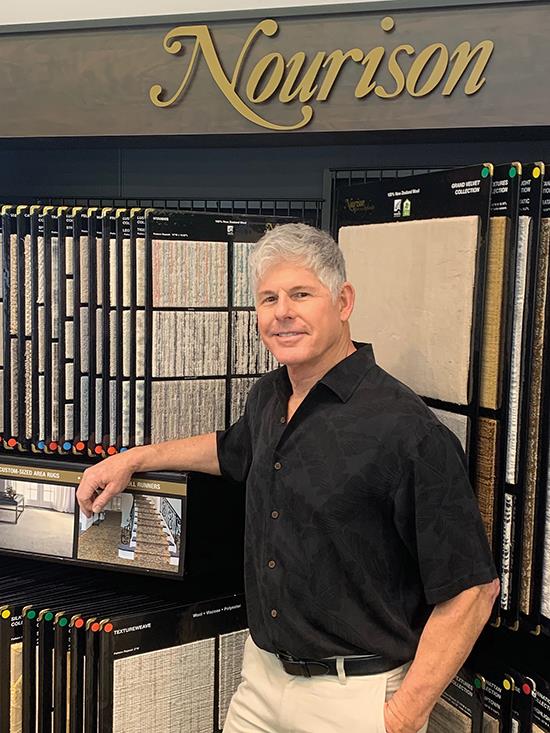 Rick Oderio, owner of the Bay Area Conklin Bros. Floor Covering and CK Flooring Distributors, is the sort of guy more likely to point out his mistakes and what he’s learned from them than to cast a spotlight on his successes. A second-generation flooring retailer, he is, above all, grateful for the opportunities he has had to grow his family enterprise from the single store into a quartet of locations netting $20 million to $24 million annually in one of the country’s most competitive markets.

THE CONKLIN BROS. STORY
Conklin Bros., believed to be the oldest flooring company in California, started in 1880 as a carpet cleaning and renovation business on Golden Gate Avenue, owned by brothers Frank and Joe Conklin. In those early days, pick-ups and deliveries were made by mule, not truck. When the brothers retired, father and son Joseph and Jack Emmons took over the business, transforming it into a retail flooring operation but retaining the Conklin Bros. name.

As the years went by, Conklin Bros. became something resembling a franchise, wherein individuals, all of whom owned businesses under the Conklin name, purchased products together but were otherwise independent. (Today, Conklin retail operations remain in both San Francisco and Santa Rosa, unaffiliated with Oderio’s.)

In 1963, Rick’s father, Richard Oderio, bought the Conklin Bros. San Jose location. Richard had worked in flooring sales at Montgomery Ward, where he had met his wife, Carol, who served as an English and etiquette instructor for the retailer. According to Rick, “My father spent the next 25 years working industriously on both his business and his philanthropic pursuits in the community.”

As so many second-generation children do, Rick grew up working in the business, even during college when he commuted from San Francisco for his shifts, and while he loved the work, he didn’t expect it to be his lifelong career.

However, when Richard became sick in his early 60s, Rick unexpectedly found himself at the helm. Things were initially rocky.

“It didn’t take me long to run the business into the ground-less than a year,” recalls Rick. “In 1989, I bought the building (in San Jose) that we are in now. We couldn’t afford it. I was about to sell it to Purina Dog Chow when a smart friend in real estate said, ‘This new area called Silicon Valley is about to explode. I promise you, if you stay open, you’ll make money standing on your head. There will be so much business coming through, and people will be spending like crazy.” That real estate friend was, of course, exactly right.

Today, the property for that business alone, a freestanding building close to downtown San Jose, is worth a pretty penny. “Buying this property was simultaneously one of the smartest and dumbest things I ever did,” laughs Oderio. “It almost broke me initially, but at some point, the property may be worth more than the business itself.”

TODAY’S CONKLIN BROS. FLOOR COVERING
Over the years, Oderio has acquired additional Conklin locations previously unaffiliated with his family business. “San Mateo was one of the best of all the Conklin stores,” recalls Oderio. “The original owner sold it to an employee, and he closed it down.” Around the year 2000, Oderio bought and reopened this location, which is in a very wealthy area, and reports that it is today a “very good store.”

Oderio’s acquisition of the Fremont store was even sweeter. His father was a 25% partner in that location, and another of the 25% shareholders gave Oderio his interest for free, which left him only having to buy half. That location also had a strong business. However, a few years ago, Oderio lost the lease on that property and moved the business to an industrial park area, close to other suppliers of construction materials and finishes. He is unsure about the location but holding out hope.

All the Conklin Bros. stores focus on mid- to high-end residential products, and each does a bit of commercial work, as well. But due to the fact that Oderio’s team is working at full tilt with regard to installation output, he doesn’t pursue commercial jobs aggressively. Being in such a significant market, there are many large flooring contractors working in the area, so Conklin Bros. focuses its commercial expertise on jobs in the $300,000 to $600,000 range. Conklin Bros. has a couple of installers who work solely on commercial jobs, which account for $4 million to $5 million in business annually. Interestingly, Oderio’s retail sales associates (RSAs), all of whom have worked for him for decades, each have a roster of commercial accounts that they oversee.

The company also has a handful of partnerships with homebuilders and multifamily operators.

COVID LOSS
The Bay Area had one of the tightest COVID lockdowns across the country. Conklin Bros. and CK were closed for three months, and in that time lost an estimated $4 million, which can’t be recouped because it is constantly running at max capacity (with a three-week waiting period) for installation. “The labor shortage is real. We can’t make up our loss,” says Oderio. “But we were in the black in probably mid-June, which is good, considering.”

As a board member for the Silicon Valley Chamber of Commerce, Oderio had the opportunity to ask Dr. Jeff Smith, executive officer of Santa Clara County, why the big boxes were allowed to stay open and sell flooring while independent retailers were forced for close. Smith responded, “You won’t like the answer, so I’m not going to tell you.”

Conklin Bros. was permitted to continue some commercial work amid the lockdown in the education and healthcare sectors, though one private school job slated to start was canceled.

THE CK FLOORING DISTRIBUTORS ACQUISITION
Five years ago, Oderio bought another venture, CK Flooring Distributors, from friends Jim Clennon and Bill Kappen. CK is a unique concept, catering to the value end of the market, that hinges on stocking large amounts of a limited number of SKUs per product category: 20 SKUs of broadloom and less than ten each of SPC and laminate.

CK creates sample boards of these stocked products and gives them to independent installers, who sell and install the product, often to property managers. CK makes a small margin on the products and doesn’t dictate what price the installers sell them for. Currently, the company has 1,200 installers in the field working under the CK system and holds a showroom in Hayward, where the installers can send their customers to see and touch the products.

Oderio reports that the venture is a big win for several reasons. First, it is great for cash flow. On one soft surface SKU alone, the company moves 200,000 yards a year. Secondly, it elevates the company’s position with suppliers. “You have to be the king of a handful of products,” says Oderio. “We do our due diligence when choosing what to sell. I shop the product-call everyone I know to see what they’re selling it for, and I tell the manufacturer that. We do a nice business with Mohawk and Engineered Floors, and they know that if they sell us a product and we lose one job based on price, we won’t buy that product again.”

Oderio reports that CK accounts for around 1,500 of his 6,000 total transactions annually and produces nearly zero customer complaints.

GREAT ASSETS
Oderio considers the Conklin Bros. name one of his greatest strengths. “We’ve been here since the great earthquake of 1906, through WWI and WWII,” he explains. In fact, Oderio has acquired an old Model T Conklin Bros. delivery truck, which he and his son are currently restoring. They plan to drive the vehicle in local parades to reinforce the company’s long-standing history in the area.

In addition to the brand, the Conklin Bros. and CK teams are his other prized resource. “We have older clientele, and, almost daily, someone will walk in and say, ‘Is Jim still here? I bought carpet from him in 1988.’ We say, ‘Yes, he’s right over there.’ They are always surprised.” In fact, one of Oderio’s RSAs just retired after a 57-year tenure with the firm. “Customers who come into the store realize quickly that they are dealing with an experienced staff,” the owner reports. “My competition is always trying to pick off my salespeople.”

Oderio is aware, however, that due to the long-term nature of employment with Conklin Bros., he may face an uphill climb in the future. While only one RSA is currently over 65, Conklin Bros. will need to be re-staffed at some point, and that is a challenge in the Bay Area, where tech has such a strong pull with younger generation job seekers.