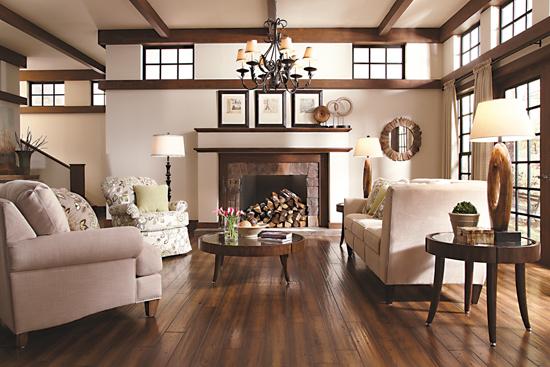 Last year, the U.S. flooring industry was up by 3.7%, according to Market Insights LLC, to $16.841 billion. While much of that was from price increases, organic growth also helped drive sales last year. This year, it is anticipated that there will be real growth in units, as the residential market heats up.

The U.S. is slowly and steadily emerging from the worst recession since the Great Depression, and it’s also one of the longest economic slowdowns in history—the housing market collapse was nearly seven years ago. Over the course of the recession, the world has changed. Global markets have become more significant, and a lot of this has to do with China: demand from China for raw materials has created all sorts of pricing pressures; imports from China have made the market more competitive than ever, and have driven some categories toward the commodity end; and China as a market has attracted manufacturers from all over the globe.

But it’s not all about China. The other three BRIC countries—Russia, India and Brazil—have become significant markets for growth, and a number of Asian countries are following behind China as low cost manufacturers. Also, the effect on the U.S. of the woes of ailing nations, particularly in Europe, has underlined the ramifications of the global economy.

So much media exposure to these global dynamics, and the simple fact that many developed nations are still struggling, has helped inoculate Americans against the idea that the economy is going to come roaring back and it will be the late 1990s all over again. All that anyone really wants now, and has reason to expect, is stability. Stable, incremental growth. And the stage is set for exactly that, with the caveat that in this more precarious global economy there could be setbacks and reversals at any moment.

HOUSING ACTIVITY
Last year’s housing statistics showed a clear recovery on all fronts. In 2012, total new home sales increased to 4.65 million, nearly 10% higher than 2011. It was the best result since 2007, though still well below the 5.5 million rate that indicates a healthy market. At year’s end, the inventory of homes on the market was 1.82 million, the lowest it’s been in a dozen years.

According to Freddie Mac, last year also had the lowest annual average mortgage rate since the end of World War II, at 3.66% for a 30-year fixed rate loan.

The pace has continued into this year. New home sales in March were up 1.5% from February to a seasonally adjusted annual rate of 417,000, and that’s up 18.5% from March 2012. However, it’s still well below the 700,000 rate that economists consider healthy. Nevertheless, added to strong numbers in January and February, it makes the first quarter of 2013 the strongest quarter since 2008.

Also, March new home purchases were 17.6% higher than in March 2012. Overall, the bulk of the activity has been at the higher end, reflecting the relative growth of the more affluent part of the U.S. population.

Though existing home sales for March were down 0.6% from February to a seasonally adjusted annual rate of 4.92 million, largely due to limited inventory, March’s numbers were up 10.3% from March 2012.

According to Lawrence Yun, chief economist for the National Association of Realtors (NAR), “Buyer traffic is 25% above a year ago when we were already seeing notable gains in shopping activity. In the same timeframe, housing inventories have trended much lower, which is continuing to pressure home prices. The good news is home construction is rising and low mortgage rates are continuing to keep affordability conditions at historically favorable levels. The bad news is that underwriting standards remain excessively tight, while renters are getting squeezed by higher rents.”

Also, existing home prices have been rising. In March, the average for all housing types was $184,300, nearly 12% higher than in March 2012. According to the S&P/Case-Shiller indexes, home prices are growing as fast as they were before the collapse of the housing market, and they’re still almost 30% below where they peaked.

Housing starts for March were up 10.3% from March 2012 at a rate of 654,000, but were down 5.8% from February. It’s likely that numbers will resume their growth rate through the spring. And March housing permits, at an annual rate of 747,000, are up 4.5% from February and 30.1% from March 2012, another indication that good growth lies ahead. A lot of that increase was in multi-family homes, a surging sector.

MULTI-FAMILY GROWTH
The multi-family sector was the most robust part of the residential market last year. According to the National Multi Housing Council (NMHC), transaction volume for apartment properties was up nearly 50% for the year to $85 billion, the highest level since before the housing collapse. New completed units posted 22% growth, finishing the year at 158,100 units.

According to Mark Obrinsky, chief economist and vice president of research for NMHC, “The apartment industry is operating on cruise control, as the expansion continues unabated. While concern about overbuilding has begun to crop up, demand for apartment residences remains strong. New construction may have finally recovered fully, but most units under construction won’t be delivered until 2014 or later.”

Last year, occupancy rates were over 95% nationally, which is an all time high—and which supports rents at an all time high. Graham Howerton, who specializes in the multi-family market for FEI Group (the builder group within CCA Global), expects good growth this year and anticipates that demand will remain ahead of supply through 2015.

The conventional wisdom is that a pendulum swings back and forth between the multi-family and single-family markets, but according to Jay Smith, president of FEI Group, this time around conditions are different. For one thing, the housing market took such a dive and for such a sustained length of time that the volume of people looking to rent was completely unprecedented, and there’s still a lot of demand to be met.

Also, the housing market is not expected to come bouncing back, not after being so overbuilt and not after consumers have seen their wealth diminish—mind you, that’s not the case for the wealthier consumers, who are doing significantly better than the rest of the population.

On top of that, an improving economy will likely mean that many of those family members that moved in with each other to save money and have been living together in close quarters for several years will start to extricate themselves and move into their own homes or apartments.

Taken together, the continued heavy demand for rentals, the anticipated slow growth rate in the single-family market, and the organic growth from family members finding their own homes suggest that the multi-family market should stay strong for longer than traditional models would anticipate, and its fall-off should be that much more gentle.

The primary supplier of nylon carpet to the multi-family market is Shaw, and Mohawk also has a strong position. Engineered Floors, a relative newcomer, has made significant inroads with its solution-dyed polyester. On the resilient side, Armstrong is the leader, followed by Mannington and Tarkett.

At the other end of the spectrum, higher end goods did well last year. On the broadloom side, it was driven by the new ultra-soft offerings that have the potential of rejuvenating the carpet industry. Higher end ceramics, hardwood and area rugs have also been in demand. But perhaps the two biggest drivers are carpet tile, which continues to displace broadloom in the commercial market and comes at a higher average price per square foot, and luxury vinyl, which is replacing lower priced VCT in the commercial market and is taking in the residential market both from lower priced laminates and sheet goods and higher or comparably priced hardwood and ceramic tile.

Carpet took back a little share from the other categories last year, thanks to the ultra-soft offerings and other medium to high end activity, along with the volume from multi-family new construction and replacement work. The soft fiber trend is still in its infancy, so its impact will be felt more significantly this year and in 2014. It looks like consumers are flocking toward the soft products, but the extent to which it impacts the industry, and how sustained the demand will be, are the big unknowns.

The good news is that all of the domestic tile producers posted gains last year. And activity so far this year is strong.

The resilient flooring category was steady in marketshare last year, with losses in VCT and felt-backed sheet goods offset by gains in luxury vinyl and glass-backed goods. The luxury vinyl category has been on fire in both the residential and commercial markets, with U.S. consumption in the neighborhood of $700 million. There’s a huge range of quality in the market, with the bottom supplied by Asian imports. There’s also some good quality product coming out of Asia, but the top of the line is made domestically.

Hardwood share was flat last year, with mill shipments edging up but significantly outpaced by imports. Raw material prices hurt margins last year, but increased builder business has increased activity in general, and it has continued into this year. However, there may be more challenges on the lumber side before it stabilizes.
Despite some growth, the laminate category lost a little share last year. Domestic production was down and imports were up, both by double digits. The area rug category also lost some share last year, mostly due to a decline in imports and in average selling prices.

This year is expected to show more significant growth in all categories. The commercial market will likely show modest growth, but it should be the residential side that lifts up the industry, led by more high end sales and increases at the builder and multi-family level. Expectations are also high for remodeling business in those middle price points, but it’s unlikely to show the same level of activity.

LOOKING AHEAD
While most signs point to a steady but sustained recovery, challenges remain. At the beginning of this year, the Social Security payroll tax jumped from 4.2% to 6.2%, back to where it stood before 2010, when the administration reduced the tax as a means of stimulating the economy. The Tax Policy Center estimates that the return to the higher rate will take $115 billion out of workers’ wages in 2013.

Also, while raw material prices have been steady for a brief time, they remain extremely volatile, and it’s likely that we’ll see more increases in petroleum-based ingredients, as well as in fuel and transportation costs. And because the U.S. is part of a global economy, the economic health of the world’s major economies is an essential foundation for long-term growth.

Countering that is the trend among U.S. consumers to buy American. It’s not doing much to move the needle right now, but numerous surveys have shown that consumers are willing to pay a bit more to buy American—some for patriotic reasons, some because they feel that American workers are treated better, and some because they see it as a more sustainable long-term strategy. Either way, its one thing to pour noble sentiments out of a pen, and another thing altogether to pull them out of a wallet.

For an indepth look at the various flooring categories, see the May 2013 issue of Floor Focus.