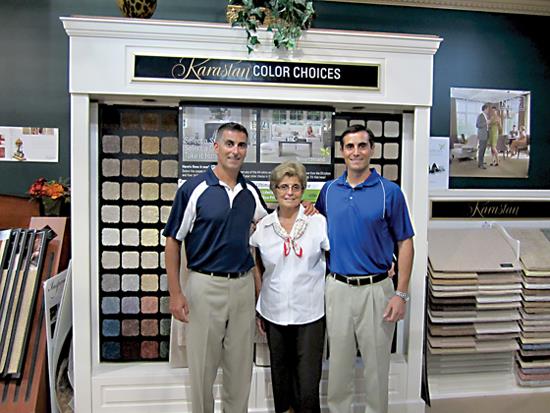 Family businesses, it seems, often fly or flop as they change generational hands, when the bonds of family either yield synergistic success or the complication of evolving roles and power structures proves problematic. Brothers John and A.J. Boyajian, co-owners of A.J. Rose Carpets & Flooring, seem to have found their formula for success, which lies in mutual admiration and division of duties.

“We respect each other for our abilities, tremendously,” explains John. “I’m nine years older, so we’re not competitive the way some siblings are. There is a level of respect. I’m not good at what he does, and I know that. He handles the financials, retail and marketing. I handle operation and the commercial side. If asked, we give each other input and collaborate when we need to.”

CHANGING HANDS
John and A.J.’s parents, Andy and Rose-Ann Boyajian, started A.J. Rose in 1977, and after more than two decades in the business, were ready to step away from full-time operation of the store. At the time, John had graduated college and was working in Shaw Industries’ residential business. John joined his parents at A.J. Rose in 1998 and focused on learning the business as well as building a commercial segment.

In 2002, Andy stepped into a position described by A.J. as “retired but relevant,” and four years later, A.J. joined the family business, working concurrently on a master’s degree in entrepreneurship at Babson College.

Under the brothers’ leadership, the business has been in growth mode: joining the National Floorcovering Alliance (NFA) in 2012, adding a third location in December 2014 and achieving its best year to date last year.

ALL IN WITH DIGITAL ADVERTISING
While most retailers with whom we speak now spend a portion of their advertising budgets on digital marketing, A.J. Rose devotes a full 50% toward this medium and, in fact, invests none of its advertising dollars in television or radio. Reports A.J. of the store’s advertising approach, “We have found our niche there and try to separate ourselves from our competitors.”

The company has had great success through Angie’s List and was, in fact, one of the first partners for Angie’s List in the area, and A.J. believes that this participation has been a significant boon for the business, adding, “We have a good following on Angie’s List and tons of reviews, and it’s almost a snowball effect. We have the most reviews, so people believe we’re the most credible. So they hire us and write more reviews.”

The company also invests in search engine optimization and pay per click advertising, as well as remarketing, in which companies strategically advertise to consumers who have visited their website or have conducted an online search for a product that they sell.

In addition, A.J. Rose does a significant amount of email marketing and participates in social media through Facebook, Twitter, Houzz and Pinterest. It also has a blog.

A.J. Rose outsources its Internet advertising work to a digital company. “The digital company runs it, but I work closely with them,” A.J. explains. “I think this is very important. The more they know about my business, the better they are on returning on the investment—they aren’t specialists in the flooring industry. You have to set goals and hold them accountable to get the most out of the investment.” A.J. Rose shoots for making two social media posts weekly and notes that these are a mix of informational and promotional, though the bulk fall on the informational side, “We really want the social media to be relevant to flooring—except if it’s something like the Patriots making it into the Super Bowl,” says A.J.

The store also invests a significant amount of money in email marketing. A.J. believes that the store’s commitment to online marketing has earned it one thing that many retailers are actively seeking: the business of next-generation customers.

The remaining 50% of the company’s advertising budget is spent on direct mail and private sales print for magazines. In total, the company spends between 3% and 4% of its bottom line on advertising.

RESIDENTIAL AND COMMERCIAL WORK
A.J. Rose started as a carpet house, and today soft surface flooring accounts for 70% to 75% of business, a figure higher than the national average because the Northeast’s cold winters drive demand for soft surface flooring. Wool is a popular fiber choice with A.J. Rose customers. The company stocks no area rugs.

On the hard surface side, the company sells resilient, laminate, hardwood (mostly solid) and ceramic tile. As is true of many retailers currently, LVT is a growing segment for the company. Seventy percent of A.J. Rose’s business is residential.

The Boyajian brothers believe that the store’s success residentially hinges on customer service. “We obsess over customer service, do whatever it takes to make the customer happy. Sometimes we go too far, but today, because of the Internet, it is just too important to leave a good impression.”

The largest segment of the A.J. Rose’s commercial business is university work. The many universities in the Boston area drive this demand, and, in fact, Harvard is the company’s largest commercial client.

John believes that the secret to the company’s success in commercial work is three-fold. First, “because we have a healthy residential business, it allows us to take more risks financially, not reckless risks, of course, but the ability to take on jobs that others could not due to cash flow issues,” he explains.

In addition, the company knows where its strength lies and focuses on those jobs. John says, “We aren’t going after half a million dollar and over jobs. We are good at the middle market, $150,000 to $200,000 projects at the most. We know our strengths, and we try to capitalize on that.”

Lastly, the company’s reputation for customer service precedes it. “The business is out there. There is so much business out there. It’s amazing. People want to work with good companies, with businesses that have a conscience and work well with others.”

STALLED BUT NOT STOPPED
In December 2014, as an end-mark on their record year, the Boyajians opened their third location, in Saugus. However, the winter’s astounding snowfall in the Boston area, which totaled over 100 inches between January and mid-March, brought floorcovering sales to a screeching halt across the region.

The Boyajian brothers, though, believe the slowdown to be temporary. “There should be pent up demand because January and February were record lows of customer counts, and generally, if a customer has decided to make a flooring purchase, they will, so we’re likely to make up the business,” says A.J. In addition, he notes that the water and salt associated with the inclement weather are hard on floors, and he expects to see residential replacement sales as a result.

What’s more, in spite of its slow start, the brothers have high hopes for the new location. Says A.J., “The new store might be our best location. It’s on a main artery and acts as its own billboard.”

And, make no mistake, the Boyajian brothers have their eyes set on expansion. John explains, “We’re excited about growth. We have a new location, and we are excited to see how it will do. If it goes well, we’ll do it again. We have a great model residentially, and we think we can make it work. We approach growth with patience, making sure to check all the boxes that will make us successful.”

A.J. adds, “We are a young company, not in hang out mode but in growth mode. We are patient and won’t rush into anything, but there is plenty of room to grow in the market.”