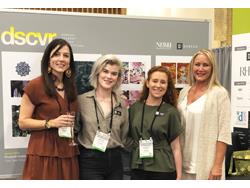 Las Vegas, NV, May 17, 2019-Winners of the dscvr19 Student Design Competition, Durkan’s annual hospitality design contest, have been announced as part of the programming at this year’s HD Expo in Las Vegas. The presentation took place yesterday in HD Expo’s Social Hub.

Dscvr is sponsored each year by Durkan, the hospitality flooring brand of Mohawk Group, and NEWH, a leading networking organization for hospitality industry professionals. The program exhibits the talent of designers in the hospitality field and contributes toward the education of future designers within the industry. The Durkan and NEWH partnership gives students opportunity, networking, experience and financial assistance for college.

Elizabeth Hadden, of Utah State University, won first place with her design, Impressions of Safavid. This design’s patterns and themes take their inspiration from the murals and mosaics of the Safavid era, which gloried in Persia’s ancient tradition of glazed ceramic art. Muted for a modern touch, Impressions of Safavid suggests glimmers of elegance, royalty and enchantment without overwhelming surrounding décor. The design’s subtle blues are evolved from the hues of coveted lapis lazuli and imperial treasuries and are laced with gold to hint at the heritage of magnificent empires of antiquity. In addition to being awarded a trip to Las Vegas to attend HD Expo, Hadden was honored on-site as the grand prize winner, receiving a $2,500 NEWH scholarship from Durkan.

Second place winner was Hannah Oelz, of Savannah College of Art and Design, with her design, Tides. Tides is inspired by the interplay of the ocean rising and falling over rockpools. This design incorporates abstracted sea creatures and shells to show how the ocean distorts these elements at different times with changing tides. The abstract shapes allow the carpet to be dynamic and flowing, creating movement throughout the space. Oelz is currently studying abroad and was not able to attend the awards ceremony. As the first runner-up, she is the recipient of a $1,000 NEWH scholarship from Durkan.

Heather Wilkinson, of Utah State University, was named second runner-up with her design, Sonoma. Sonoma was created to bring attention to the landscape of the American Southwest. The light blues and purples prompt a visual setting sun over the Colorado River’s flowing course and waterfalls. The rugged rust and flax colored fibers perfectly match the panorama one would revel in when visiting the magical Grand Canyon. Earth tones marry with the patterns used, grounding the energy of the end user when this carpet is encountered. The organic and cascading pattern becomes full of substance and elegant grit. Wilkinson was also awarded a trip to attend HD Expo.

For the competition, student designers submitted concepts for flooring in standard ballroom and prefunction settings that were created as separate components but coordinated with one another, with the number of colors not to exceed 12. Submissions were reviewed by a panel of Durkan associates and judged based on concept, presentation and market feasibility.

Designs from the top three finalists are on display at the expo this week and will ultimately be promoted and cataloged by Durkan.

Dscvr is open to college and university students who are members of NEWH, which offers student membership free of charge. College faculty within interior design programs are encouraged to implement the competition as part of their curriculum.