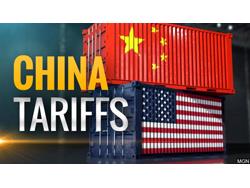 Trade tensions between the world’s two biggest economies have swayed stocks in recent months as concerns have grown that the tariff spat could add to an already slowing global growth picture.

Officials from both countries are holding further talks this week in Washington after discussions in Beijing. President Trump tweeted on Sunday that “big progress being made on soooo many different fronts!”

Aides set up platforms before a group photo with members of U.S. and Chinese trade negotiation delegations at the Diaoyutai State Guesthouse in Beijing, China, on February 15.

“The market has been worried about the China tariffs but Trump wants a deal and a lot of the fears are generally overblown,” said Patrick Spencer, vice chairman for equities at Baird.

Other analysts were more cautious, given that there is still a substantial gap between the concessions China is willing to offer and what the Trump administration will accept. Sharp divisions remain on items such as how Beijing can address U.S. complaints that China pressures U.S. companies to share technology.

Investors were also looking ahead to a busy week of central bank messaging, with minutes from recent Federal Reserve and the European Central Bank meetings due to be released. Dovish signals from the Fed and the ECB in recent weeks have helped stocks bounce off a slump late last year.

“The more patient terminology from the Fed has been fairly accommodative for markets so far,” Mr. Spencer said.

The Fed will release the minutes from its Jan. 29-30 policy meeting on Wednesday and the ECB will publish its January meeting minutes on Thursday.

The memos “will be scrutinized for clues about the depth of the shifts in their respective outlooks,” analysts at Société Générale wrote in a note to clients.

In currencies, the WSJ Dollar Index, which tracks the dollar against a basket of 16 currencies, was down 0.1%.

In the U.K., the pound edged up as a group of British lawmakers quit Britain’s main opposition Labour Party, a step illustrating how Brexit has exposed rifts in the British political system. The group all favor the U.K.’s membership of the EU, though their move is seen as unlikely to alter the Brexit prospects.

Sterling was up 0.3% against the dollar.