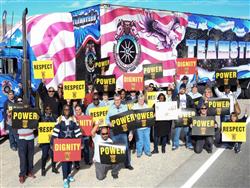 Las Vegas, NV, July 5, 2022–Members of Teamsters Local 631 who work under the Convention Industry Carpet Agreement with Shepard Expo and GES unanimously ratified a new four-year collective bargaining agreement that includes the largest wage package ever for this contract, the union reports.

“Las Vegas is the number one convention and trade show destination in the world,” said Tommy Blitsch, secretary-treasurer of Local 631 and director of the Teamsters Convention, Trade Show and Casino Division. “These Local 631 members have been through a lot over the last 18 months and deserved a collective bargaining agreement that rewards them for their commitment to the industry.”