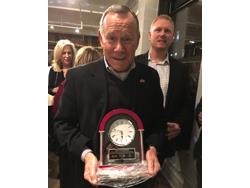 Spanning over 50 years, Williamson’s leadership has impacted many industry professionals and families associated with the flooring industry.

In his early years, Williamson’s parents owned a retail grocery store on the Jersey shore, and he grew up stocking shelves. From an early age, his dad taught him to do every job right the first time or do it again.

Williamson was the first person in his family to attend college. He was a c-student, but the president of his fraternity and captain of the football team.

He joined the Marines and was sent off to Vietnam right after he got married at age 23. At the age of 26, he was promoted to captain. He was critically wounded in combat and earned a Purple Heart.

After his military career, Williamson went to work with JP Stephens, which sold carpet under the Gulistan brand. Then he moved to Karastan, just prior to its purchase by Fieldcrest. Following that, he went to the contract side of the business, working for Contract Distributors and Monroe Snyder.

He joined Starnet 13 years ago, where he has overseen relationships with vendor partners.