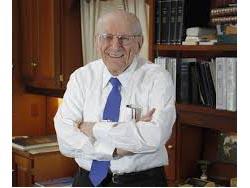 Richmond, VA, November 24, 2020-Stanley F. Pauley of Carpenter Co., 93, has died. Until several weeks ago, he had remained engaged in the daily activities of the company he had led for more than 40 years.

Pauley was hired by E. Rhodes Carpenter in 1954 and moved from Canada to Richmond, Virginia. At that time, Carpenter was making seating cushions out of latex foam. In the early 1960s, with Carpenter’s blessing, Pauley and a small group of executives made the decision to switch to manufacturing urethane foam, which at that time involved making a prepolymer and molding foam. Shortly thereafter, Union Carbide helped Carpenter implement the one-shot process which forms the basis of how most urethane foams are made today. Throughout the ensuing decades, the company embarked on an expansion strategy that initially focused on North America but eventually included acquisitions in Europe. The expansions were largely directed by Pauley. In addition to increasing the flexible urethane foam production footprint, in 1970 Carpenter Co. broke with convention and opened a greenfield site for the production of polyether polyols.

Upon the death of Carpenter in the early 1980s, Stan became chairman and CEO and the majority shareholder. The company continues to be owned by the Pauley family.