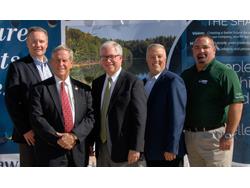 In September 2018, ​Shaw was recognized with the Outreach Award at the 2018 Salute to Manufacturing Awards for making tangible, measurable impacts in the South Carolina communities in which it operates. Shaw’s commitment to community goes hand in hand with its focus on sustainability with both helping the company achieve its corporate vision to create a better future. In May 2018, Plant 8S unveiled a newly completed Combined Heat and Power (CHP) plant, which reduces Plant 8S’ ​annual greenhouse gas emissions by an estimated 26,000 metric tons--an impact equal to removing almost 5,500 passenger vehicles from the road each year.

Plant 8S is also a Wildlife And Industry Together (W.A.I.T.) site by the ​South Carolina Wildlife Federation​.