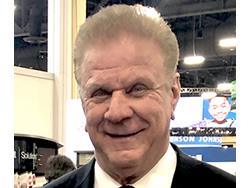 Abramowicz spent his entire career in the flooring business, starting with New York Carpet World in Chicago, moving to LD Brinkman in Texas and then taking a role with Domco Azrock. Following, Domco Azrock, he purchased Kentile Floor Company, based in Canada before became a flooring buyer for Home Depot in Boston. From 2002 to 2014, he was vice president of sales for Beaulieu America.

In 2021, BAMR Holdings purchased the assets and business operations of Southwind, and Abramowicz retired.

After selling the company, Abramowicz bought a home and boat on Chicamauga Lake in Tennessee. He died of cancer compliations from Agent Orange exposure during his Vietnam service as a Marine. He is survived by daughters April and Michele and two grandchildren. April works for Amorim Cork.

Watch the video with Richard from Surfaces 2019 here.