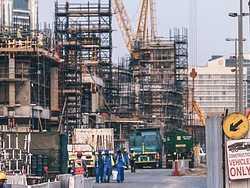 Portsmouth, NH, July 29, 2020–Despite some project cancelations, postponements and delays, the U.S. construction pipeline only saw a 1% drop in projects and rooms for the first half of the year compared to the same time last year, according to hotel research firm Lodging Econometrics.

Developers with projects under construction are still experiencing some opening delays, the report says. However, projects continue to move forward, albeit with extended timelines.

With franchise development staff largely working from home and nonessential travel halted, the ability to get a new development deal signed has slowed. This has resulted in a 53% decrease in new project announcements compared to the second quarter of 2019 when 359 projects/44,895 rooms were recorded.

As domestic travel begins to pick back up, hotels have been reopening and many others have begun to move-up renovation plans and/or are repositioning their property with a brand conversion. In the first half of 2020, LE recorded 1,465 active renovation projects/314,043 rooms and 1,196 active conversion projects/136,110 rooms throughout the United States.