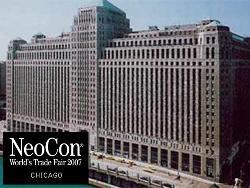 Held from June 10 to 12 at The Mart in Chicago, the 51st edition will unveil the latest products from leading and emerging companies, as well as explore a wide range of timely topics such as human-centric design, the rise of outdoor workplaces and the intersection of hospitality and the office.

Keynote and seminar registration is also open as thought leaders across design disciplines will provide the foundation for an inspiring and educational show narrative. Headlined by four of today’s most influential designers from around the world, including Robin Standefer and Stephen Alesch, founders of Roman and Williams Buildings and Interiors; Ilse Crawford, creative director and founder of Studioilse, London; and Liz Ogbu, principal of Studio O., daily keynotes will address the most important aspect in the design of the built environment: the people who inhabit it.

The NeoCon 2019 website and registration is live at www.neocon.com.